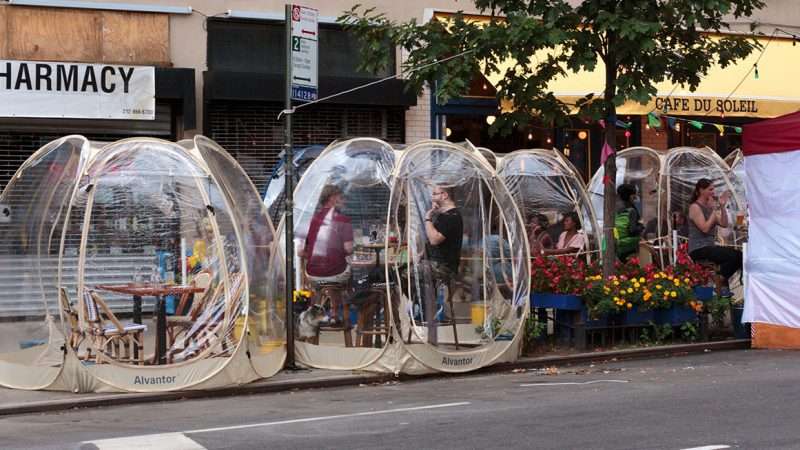 New York City restaurants have been hit hard during the last year by COVID-19 and bad government policy. Although outdoor dining has been permitted since June, the city’s Department of Transportation (DOT) keeps changing the rules, forcing already burdened restaurants to spend heaps of money to stay compliant.

New regulations that went into effect on December 15 purport to help restaurants prepare for winter road conditions that could jeopardize customers’ safety if cars skid into dining areas, which are often set up in blocked-off parking spots and on sidewalks. Restaurants now must fill their roadway barriers with sand or soil. For many, this rule requires adding interior walls and bottoms to the structures, or ripping out the plants that restaurateurs added earlier in the year. Most restaurants also will be forced to add “a plastic water-filled barrier in front of the roadway barrier facing oncoming traffic,” per the DOT, which says a street’s crash rates and traffic volumes will determine which restaurants are exempt. Reflective tape must be added too. The tape and plastic barriers will be provided by the city.

It’s nice to make these “streeteries” sturdier, but the city says they must also be easy to move when inclement weather strikes. If there’s a snow alert, diners will not be allowed to sit in outdoor areas, not even fully covered ones. If 12 or more inches of snow are in the forecast, restaurateurs must remove the roadway barriers they made hundreds of pounds heavier at the city’s behest.

That’s not all. Propane-fueled patio heaters, which use 20-pound propane tanks, are temporarily allowed on sidewalks but not blocked-off roadways. Storing a propane tank requires a permit from the fire department, but the propane tank must be stored in an above-ground enclosure that’s at least 10 feet away from buildings or adjoining lots, which is a tough feat in most of the city.

All of these requirements are in addition to a mandatory 10 p.m. closing time and regulations dictating that bars serve food with all booze purchases, leading to lots of $1 popcorn offerings to satisfy the requirement should the authorities come knocking. It’s now standard practice for bartenders to let drinkers know which of their food options is the cheapest.

Of course it’s fair for city officials to be concerned with safety, but had they offered relevant guidance earlier, restaurants might have had the opportunity to build appropriate barriers the first time around instead of being forced to make expensive modifications later.

The need for roadway barricades that are both sturdy enough to withstand cars and light enough to move when it snows is emblematic of the jam in which restaurants find themselves. Preserving the country’s greatest restaurant scene in the midst of a pandemic feels like an afterthought.