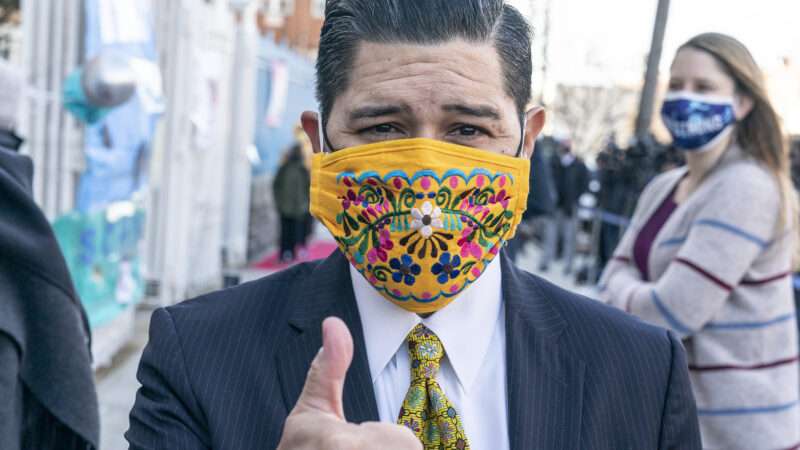 After nearly three years of calling parents racist, New York City Schools Chancellor Richard Carranza today has announced his resignation. Sadly both for the department he misgoverned and the K-12 education consumers in faraway states, Carranza’s rotten legacy will surely live on.

After having foisted upon the San Francisco school system a “desegregation” plan that objectively made things worse, Carranza came to New York in 2018 with a single-minded goal: “No, we will not wait to integrate our schools, we will not wait to dismantle the segregated systems we have!”

With 1.1 million students overseen by the New York City Department of Education (DOE), Carranza became arguably the single most influential public official in the United States to embrace the acidic language and outcomes-based approach of equity. Throughout his tenure, he attempted to work backward from perceived markers of success—the city’s eight specialized high schools, its Gifted & Talented program, middle schools that use performance criteria in selecting students—and declared them to be edifices of white (or white-adjacent) privilege.

This campaign, incongruent as it may seem, continued unabated during the COVID-19 pandemic, despite the city’s notoriously herky-jerky approach to reopening, which has hurt poor and minority students most of all. My oldest daughter today is attending her seventh grade class for the first time since October, and eighth time in 11 months; I count in my inbox more than 80 school emails over that span containing the word “equity.” After the ransacking of the Capitol on January 6, Carranza sent us a message emphasizing that “the lives of countless Black Americans have been lost for profoundly less threatening actions than what we saw perpetrated today.”

Parents, educators, and public officials who didn’t agree with, or even had questions about, Carranza’s preferred methods for “dismantling” systemic racism were all too frequently tarred with one of the single most toxic accusations possible in contemporary American life: racist. Here’s how he set the tone, in one of his first tweets as chancellor:

At a New York City Council meeting in May 2019, in response to a query about scrapping entrance exams to elite high schools, Carranza said: “I can’t tell you how many times I hear in this discussion where there’s an equation [of] diversity and a lowering of academic students. I will call that racist every time I hear it….So if you don’t want me to call you on it, don’t say it.”

When parents in Queens objected at a January 2020 meeting to Carranza’s “restorative justice” policies of easing up disciplinary measures (whose punishments were deemed disproportionately meted out on black and Latino students), the chancellor cut the meeting short, then accused the parents of “grandstanding” and worse.

“This is about some voices in the community that don’t like me,” he said. “Just look at the abject racist things that are said about me: ‘Go back where I came from,’ ‘taco-eating Carranza,’ ‘fire Carranza Ai Yi Yi,’ with the exclamation points in Spanish. Absolutely, they’re racist.”

This behavior was not without controversy. Nine city council members in 2019 accused Carranza of “divisive rhetoric,” and suggested he should shape up or ship out. (Those members were in turn accused by mayoral spokeswoman Freddi Goldstein of waging a “racially charged smear campaign.”) There have been lawsuits over his alleged “anti-white bias,” constant roasting in the New York Post, and a dedicated band of mostly Asian parents who hounded Carranza at his public appearances.

But I observed up close how Carranza’s parent bashing trickled down to the local district level, and was used to publicly (and unfairly) shame parents who had the temerity to ask reasonable questions about their kids’ schools. One such dad who I witnessed get dressed down for his alleged privilege after he asked a question at a public forum which he prefaced by saying that he supported the equity-based admissions changes under discussion, later emailed me that: “The whole process [has] left us so traumatized and frankly angry that I can’t see myself going through it again for our younger daughter….It’s become [such] a toxic subject of our lives that I really can’t live with anymore. So, [the] end result is that we have decided to leave Brooklyn altogether.”

Though New York is being held up—alarmingly, in my view—as a model for big-city public school reopening, Carranza’s argumentation style has been adopted across the country by teachers unions dragging their feet on letting kids back into school buildings. Just last week, a teacher and union official in Oakland, California, tweeted that, “All the rich white parents suddenly concerned about mental health can take a seat. Most of them are causing their kids’ anxiety by pressuring them to complete asynchronous work and feeding into their sense of entitlement. Sorry/not sorry.”

Carranza, who is being replaced by current Bronx Executive Superintendent Meisha Ross Porter, bragged about his record at a press conference today with Mayor Bill de Blasio.

“In the largest school system in America, we made true progress in dismantling structures and policies that are products of decades of entrenched racism,” he said. “Like suspending school screens.”

Though Carranza’s premature departure is being portrayed as the result of clashing with de Blasio (who is seen by local activists as going too slow on equity), Porter signaled continuity on that score. “The reality is segregation exists and I’m not going to shy away from the importance of really looking at inequities around admissions processes and really pushing forward for ways we can create opportunities and access for all students across New York City,” she said.

New York’s K-12 system, as measured before the pandemic, is 41 percent Latino, 26 percent black, 16 percent Asian, and 15 percent white, with 73 percent of kids defined as living in poverty. An influential report from the University of California, Los Angeles’ Civil Rights Project concluded in 2014 that the city has “one of the most segregated public school systems in the nation,” due to those populations being clustered unequally, in schools of inequal quality and funding. The history behind that sorting is tangled up with oftentimes racist land use restrictions, eminent domain, and housing policies, plus various population flows based on economics and immigration.

A mayoral advisory board on diversity in 2019, in addition to seeking the abolition of all school selection criteria, recommended that “all schools represent the socioeconomic and racial diversity of their community school district within the next three years, and by their borough in the first five years…[and] the city as a whole” within 10. Pre-pandemic results of a couple of such local initiatives showed it leading to enrollment declines.

For now, Porter will have her hands full just trying to manage the reopening process, about which she today dropped the welcome news that high schools are “ready to go.” Hopefully, even if she pursues heavy-handed demographic re-sorting, the new chancellor will ease up on the active discouragement of public participation through reckless accusations of racism.