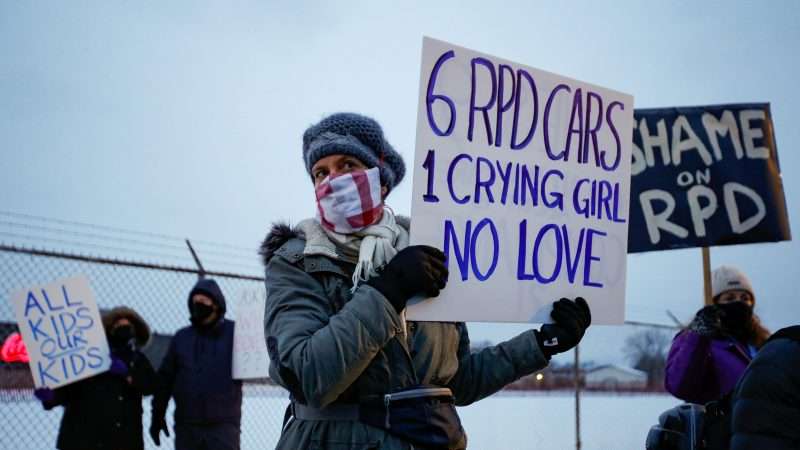 The 86 minutes of footage show Rochester police officers struggling to convince a crying and hysterical young girl to get in the back of a police cruiser. According to news reports, the girl was distressed, walking down the snowy street, and had reportedly said she wanted to kill herself and her mother. Nine officers ultimately responded to the scene, which somehow escalated to the girl being handcuffed.

“I want my dad,” the girl wails as she refuses to get in the police car.

“I’m gonna pepper spray you and I don’t want to,” a female officer says.

“Officer,” the girl pleads to a female officer after she’s sprayed, “please don’t do this to me.”

“You did it to yourself, hon,” the officer responds.

The Rochester Democrat and Chronicle reported that it took an ambulance about 15 minutes to arrive after the girl was pepper-sprayed and 23 minutes before her handcuffs were removed.

Rochester Mayor Lovely Warren said in a statement to the Democrat and Chronicle that she released the footage to provide additional transparency: “I continue to share our community’s outrage for the treatment of this child and have ensured that she and her family have been connected to the support they need through our Person in Crisis team.”

Some of the officers involved have been suspended, and the girl’s mother says she intends to sue.

As Reason reported, the Rochester police union defended the pepper-spraying.

“They were trying to get her into the car,” said Mike Mazzeo, president of the Rochester Police Locust Club, at a press conference. The officer who pepper-sprayed the girl “made a decision there that he thought was the best action to take,” Mazzeo declared. “It resulted in no injury to her. Had they had to go and push further and use more force, there’s a good chance she could have been hurt worse. It’s very difficult to get someone into the back of a police car like that.”

The Rochester Police Department is already under intense scrutiny after the police killing of Daniel Prude, who died last year while having a mental health crisis after several officers pinned him to the ground until he suffocated.

The incident also highlights growing national concerns about police interactions with young children. Viral videos over the past couple of years have shown police in schools and communities using disturbing force against small children. A January video showed a school resource officer body-slamming and handcuffing a teenage girl in central Florida. Last August, body camera footage emerged showing officers in Key West, Florida, trying and failing to handcuff an eight-year-old boy, whose wrists were too small for the cuffs. An Orlando school cop made national headlines in 2019 when he arrested a six-year-old girl. An officer at a high school in Camden, Arkansas, was relieved of duty after a video showed him putting a student in a chokehold and lifting the student off the ground. In 2019, a North Carolina officer was fired after he brutally body-slammed a middle schooler, and a sheriff’s deputy in Florida was arrested and charged with child abuse after body-slamming a 15-year-old girl at a special needs school.