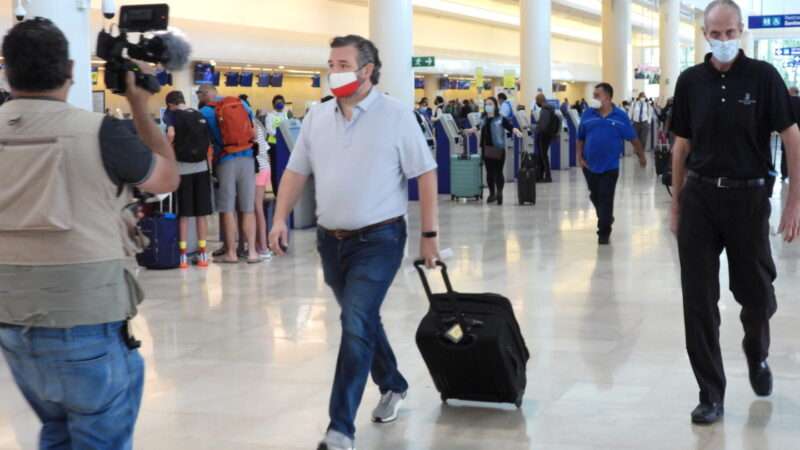 By now, you’ve probably heard about Sen. Ted Cruz (R–Texas) fleeing his mid-crisis state for a family vacation to Mexico. As Texans struggle to survive amid days of freezing weather and power outages, the Cruz story is, at best, a distraction from any real issues involved. But it’s also perfect tribal warfare fodder, so of course it became the centerpiece of Texas crisis coverage and commentary yesterday.

Perhaps the most tedious part about the whole cycle is how rarely anyone’s opinions on this story deviate from their already-held opinions of Cruz and/or Republicans more broadly. Those who think he’s the worst have seized on this as another opportunity to say why he’s the worst—what kind of monster abandons his constituents in a time of tragedy to soak up some sun in Cancun? Those who normally support Cruz countered that the senator is powerless in this situation and that the senator and his family staying in Texas and suffering along with the masses wouldn’t have accomplished anything.

That last part is both true and not. A number of politicians, including those from outside Texas, have been doing plenty to help out from afar. For instance, Rep. Alexandria Ocasio-Cortez (D–N.Y.)—a perennial punching bag of Cruz’s—helped raise $1 million for Texans in need yesterday. So the idea that Cruz couldn’t be doing something doesn’t fly.

Did Cruz necessarily need to remain in Texas to do good deeds for the people there? The AOC example also suggests the answer here is no. The Cruz defenders are right about at least that much; the senator could very well have pitched in from his phone and laptop on a Mexican beach.

But did he actually do that? The answer is also no.

There’s no evidence that Cruz high-tailed it out of Texas and then, once he and his family were safe, got right back to work in aiding his constituents. Rather, he arrived in Cancun, spent his time there defending his decision to flee Texas, and then returned ahead of schedule yesterday afternoon, blaming the whole debacle on his kids.

“With school cancelled for the week, our girls asked to take a trip with friends. Wanting to be a good dad, I flew down with them last night and am flying back this afternoon,” Cruz said yesterday.

Everybody’s wrong about the Facebook/Murdoch standoff in Australia. Reason‘s Scott Shackford explains why here. “The fight between Facebook and Australian media companies—which boiled over Wednesday with an announcement that Facebook would no longer allow users to share links to news stories from outlets based in Australia—is not about ‘democracy’ or monopolies in any way, shape, or form. It’s about advertising revenue, and who gets it,” Shackford writes.

The drama stems from the Australian government trying to charge Facebook and Google to link to news websites.

As usual, Mike Masnick at Techdirt also has some smart thoughts on the issue. “Facebook is a terrible, terrible company and deserves lots of blame for lots of bad things that it does. But this ain’t it,” Masnick writes. And yet…

We can argue about whether or not Facebook is ‘compatible with democracy’ but the simple facts of the situation are that Australia—pushed heavily by Rupert Murdoch—has decided to put in place a plan to tax Google and Facebook for any links to news. The bill has all sorts of problems, but there are two huge ones that should concern basically anyone who supports a free and open internet.

First is the link tax. This is fundamentally against the principles of an open internet. The government saying that you can’t link to a news site unless you pay a tax should be seen as inherently problematic for a long list of reasons. At a most basic level, it’s demanding payment for traffic. There are two entire industries out there based entirely around trying to get more traffic from these companies: “search engine optimization” and “social media management.” The reasons there are those industries is because everyone else in the world has figured out that having prominent links on search engines and social media is valuable in its own right and that it’s up to the sites that get those links, and the corresponding traffic, to make use of it.

But here, a bunch of lazy newspaper execs who failed to adapt and to figure out better internet business models not only want the traffic, they also want to get paid for it.

This is like saying that not only should NBC have to run an advertisement for Techdirt, but it should have to pay me for it. If that seems totally nonsensical, that’s because it is. The link tax makes no sense.

New York has legalized gestational surrogacy. Until this week, the state of New York made it illegal for a woman to carry another’s child. “My husband and I had our two daughters through surrogacy—but we had to travel 3,000 miles to do it because our home state had banned the practice,” state Sen. Brad Hoylman (D–New York City) said in a statement. “Thanks to the Child-Parent Security Act, gestational surrogacy is finally legal in New York State, giving LGBTQ couples and people experiencing infertility the opportunity to build a family through surrogacy here at home.” You can find more info on the new rules and requirements for New York surrogates here.

20 years from now I’m going to teach students about how in the same country, at the same time, people became millionaires and did prison time for the same substance. https://t.co/QHwqA4X4qU

• Americans made our sixth unmanned landing on Mars yesterday.

-@CapitolPolice tell me 35 officers are under investigation for actions on Jan. 6.

Acting Chief Pittman has directed any member whose behavior is not in keeping with the Department’s Rules of Conduct will face appropriate discipline. 1/2 pic.twitter.com/xqbF8B3eNx

• South Carolina has banned nearly all abortions. Planned Parenthood is suing to stop it.

• Would Americans have more babies if the government paid them? “Research from around the world suggests that, like other fertility policies, payments to parents do slightly increase the number of babies people have in the near term. But no move has made a major long-term difference,” reports The New York Times.

• President Joe Biden walks back plans to be humane to undocumented immigrants: