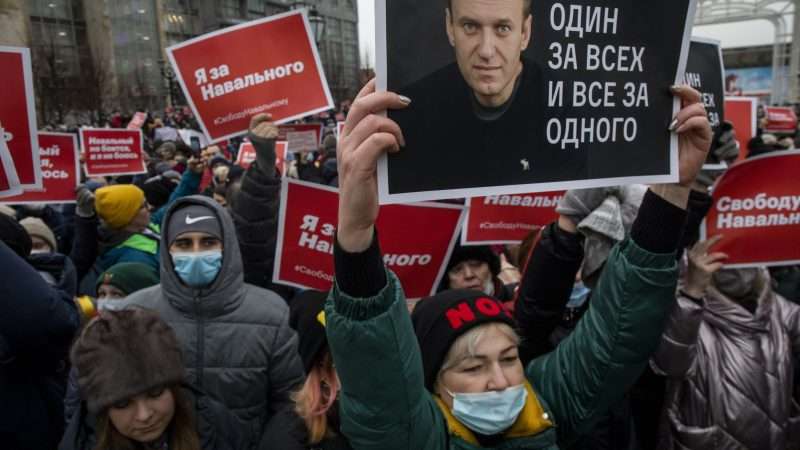 More than 5,000 people were arrested across Russia on Sunday during the second round of protests over the imprisonment of opposition leader Alexei Navalny.

Video from the day depicts police, equipped with riot gear and batons, frequently beating protesters before dragging them away.

Despite the government’s strong warning against doing so, thousands of people took to the streets in opposition to Navalny’s continued detainment. Navalny’s wife, Yulia, was among those arrested. She was later released and fined 20,000 rubles ($263).

During the week leading up to Sunday’s protest, the Russian government placed several Navalny supporters under house arrest, claiming that their calls for protests which would violate COVID-19 restrictions are a threat.

Navalny has made his name as an anti-corruption crusader and adversary of President Vladimir Putin. He was arrested on January 17 for failing to meet with probation officials while recovering abroad from an August poisoning linked to the Russian government.

Demonstrators in Moscow had originally planned to rally in front of the offices of Russia’s Federal Security Service, the agency Navalny claims was responsible for poisoning him, but a heavy police presence forced them from the area.

In a press conference on Monday, the Kremlin called the demonstrations illegal and accused protesters of antagonizing police.

“There can be no conversation with hooligans and provocateurs,” said Dmitry Peskov, Putin’s press secretary. “The law should be applied with the utmost severity.”

Russia’s crackdown on demonstrators has sparked condemnation from international leaders.

“The U.S. condemns the persistent use of harsh tactics against peaceful protesters and journalists by Russian authorities,” tweeted U.S. Secretary of State Antony Blinken. “We renew our call for Russia to release those detained for exercising their human rights, including Aleksey Navalny.”

Navalny appeared in court today for violating the terms of his probation for a 2014 embezzlement conviction that critics say was orchestrated to keep Navalny from running for office. If convicted, he faces up to 3 1/2 years in prison.

When asked why he had not provided documentation to prison service officials as to his whereabouts, Navalny responded angrily, CNN reported.

“Why are you sitting here and telling the court you didn’t know where I was?” he said. “I fell into a coma, then I was in the ICU, then in rehabilitation. I contacted my lawyer to send you a notice. You had the address, my contact details. What else could I have done to inform you?”

Navalny cited Putin’s announcement that the president personally allowed him to be flown out of the country for treatment: “The president of our country said live on air he let me go to get treatment in Germany and you didn’t know that, too?”

Prior to the proceedings, police blocked pedestrian traffic in the area with barricades and detained dozens of protesters. Navalny supporters have called for further demonstrations this weekend.