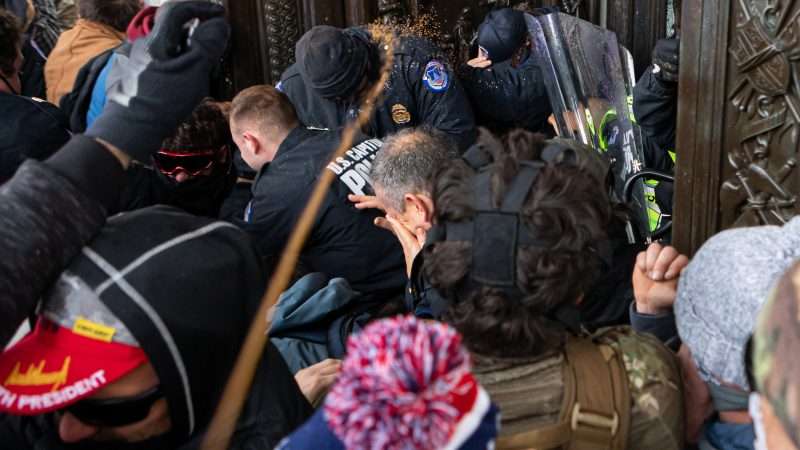 The House members who are prosecuting Donald Trump on the charge that he incited last month’s Capitol riot opened their case yesterday with a dramatic video that interspersed scenes of the violence with the former president’s words that day. It clearly shows that Trump supporters inspired by his oft-repeated fantasy of a stolen presidential election broke down security barriers, attacked police officers, smashed windows and doors, stormed the building, and forced the members of Congress who were about to ratify Joe Biden’s victory to run for their lives instead.

Since the Senate voted yesterday to proceed with the trial, rejecting the argument that it has no authority to try a former president, the task for Trump’s lawyers is to deconstruct the connection between what he said and what his followers did. Judging from their trial memorandum, they will attempt to do that by arguing that Trump never advocated violence, that some of his supporters planned to attack the Capitol even before his inflammatory pre-riot speech, and that he cannot reasonably be held responsible for the behavior of individuals who interpreted his demand that they “fight like hell” to “stop the steal” in a more literal way than he intended.

That strategy would make sense if Trump faced a criminal charge of incitement to riot or a lawsuit seeking compensation for the deaths, injuries, and property damage caused by the attack. But it fundamentally misconstrues the basis of his impeachment, which alleges that he abused his power, violated his oath to uphold the Constitution, neglected his duties as president, and undermined democracy by using extralegal means to overturn the election results. To defend against those charges, it is not enough to argue that Trump could not be held accountable for the riot in a criminal case or civil lawsuit.

“The Federal Bureau of Investigation has confirmed that the breach at the Capitol was planned several days in advance of the rally, and therefore had nothing to do with the President’s speech on January 6th at the Ellipse,” Trump’s lawyers say. The fact that some of Trump’s supporters talked about attacking the Capitol before they arrived in Washington, of course, does not mean that none of the rioters were moved by his fiery rhetoric that day. More to the point, Trump had been persistently promoting his delusion that he actually won the election by a landslide for months, and the protesters came to D.C. at his behest to stop Biden from taking office. He invented the grievance that motivated the rioters, including those who planned ahead as well as those who acted in the heat of the moment.

As Trump urged his followers to “walk down to the Capitol,” the House managers’ video shows, Trump supporters reacted with cries of “Take the Capitol!” While Trump was still speaking, a group of his supporters peeled away from the crowd to begin the march. When they arrived at the Capitol, they started dismantling the security barriers around it, brawling with police officers, and heading up the steps.

Quoting from a Gateway Pundit post, Trump’s lawyers note that it takes about half an hour to walk the 1.6 miles between Ellipse Park, the site of the “Save America” rally, and the Capitol. Trump began speaking just before noon and continued until 1:12 p.m. Yet protesters “had already breached Capitol Grounds a mile away 19 minutes prior to the end of President Trump’s speech.”

That is not exactly an airtight defense, given that video shows protesters heading for the Capitol during Trump’s speech. Here are some of the things that Trump said toward the beginning of his address, allowing plenty of time for protesters moved by his words to arrive at the Capitol and begin the assault:

Joe Biden cannot be allowed to take office because he stole the election through massive, unprecedented voting fraud.

“We won this election, and we won it by a landslide.”

“Our country has had enough. We will not take it anymore….We will stop the steal.”

“As you know, the media has constantly asserted the outrageous lie that there was no evidence of widespread fraud….We will not be intimidated into accepting the hoaxes and the lies that we’ve been forced to believe over the past several weeks. We’ve amassed overwhelming evidence about a fake election.”

“Democrats attempted the most brazen and outrageous election theft. And there’s never been anything like this, so pure theft in American history. Everybody knows it.”

“Our election was so corrupt that in the history of this country, we’ve never seen anything like it….No third world countries would even attempt to do what we caught them doing.”

Vice President Mike Pence has the power to stop Biden from taking office by rejecting his electoral votes.

“If Mike Pence does the right thing, we win the election….All Vice President Pence has to do is send it back to the states to recertify, and we become president.”

“Mike Pence is going to have to come through for us. And if he doesn’t, that will be a sad day for our country, because you’re sworn to uphold our Constitution.”

If Pence fails to do “the right thing,” the result will be intolerable.

“We’re going to have somebody in there that should not be in there, and our country will be destroyed. And we’re not going to stand for that.”

“[We'll be] stuck with a president who lost the election by a lot. And we have to live with that for four more years. We’re just not going to let that happen.”

If we “show strength,” we can stop Biden from taking office.

“It is up to Congress to confront this egregious assault on our democracy. And after this, we’re going to walk down, and I’ll be there with you.”

“We’re going to walk down to the Capitol, and we’re going to cheer on our brave senators and congressmen and women. And we’re probably not going to be cheering so much for some of them. Because you’ll never take back our country with weakness. You have to show strength and you have to be strong. We have come to demand that Congress do the right thing and only count the electors who have been lawfully slated….I know that everyone here will soon be marching over to the Capitol building to peacefully and patriotically make your voices heard today.”

Although Trump said his supporters should protest “peacefully,” it was predictable that some of them would go further than that, especially after Pence publicly stated that he did not have the authority to do what Trump wanted. (The video shows that Pence, whom Trump slammed on Twitter after the protest turned violent, was a primary target of the rioters’ ire.) Trump sent his followers on a doomed mission to stop an “egregious assault on our democracy,” ostensibly by cheering legislators who challenged Biden’s electoral votes and jeering those who declined to support those challenges. There was never any chance that Congress actually would overturn Biden’s victory, and Trump surely knew that.

“If you don’t fight like hell, you’re not going to have a country anymore,” Trump said about an hour into his speech. By that point, the first wave of rioters was already on its way. But he had delivered essentially the same message over and over again—not just that day but in the two months following the election.

“The president asked people to come and show their support,” Christopher Grider, a Texas winery owner who faces federal charges in connection with the riot, told a Waco TV station that evening. “I feel like it’s the least that we can do.” The Houston Chronicle notes that Grider says “he never planned to be at the Capitol, much less take part in an insurrection.” Grider’s lawyer argues that he got swept up by a “mob mentality” fostered by Trump: “He would never have anticipated finding himself in the situation, but for the president and the rally and the way everything went down.”

Grider obviously has an interest in deflecting blame for his own actions that day, and it should go without saying that Trump’s rhetoric cannot excuse another person’s criminal acts. But Trump’s speech was grossly irresponsible precisely because of its predictable impact on passionate, impressionable supporters like Grider, and his remarks that day cannot be divorced from his obstinate refusal to accept that he lost the election, which went far beyond exercising his right to challenge the results in court.

“The President of the United States summoned this mob, assembled the mob, and lit the flame of this attack,” Rep. Liz Cheney (R–Wyo.), the third-ranking Republican in the House, said before she joined nine other Republicans in supporting Trump’s impeachment. “Everything that followed was his doing. None of this would have happened without the President. The President could have immediately and forcefully intervened to stop the violence. He did not. There has never been a greater betrayal by a President of the United States of his office and his oath to the Constitution.” Sen. Mitch McConnell (R–Ky.), then the Senate majority leader, agreed that “the mob was fed lies” and “provoked by the president.”

According to Trump’s lawyers, by contrast, all he did was exercise his First Amendment right to express “a difference of political opinion…on an issue of voting irregularity.” The question is not whether Trump had a First Amendment right to say whatever he wanted about the election, however outlandish and palpably untrue. It is whether Congress can hold him accountable for exercising that right in such a manifestly reckless way.