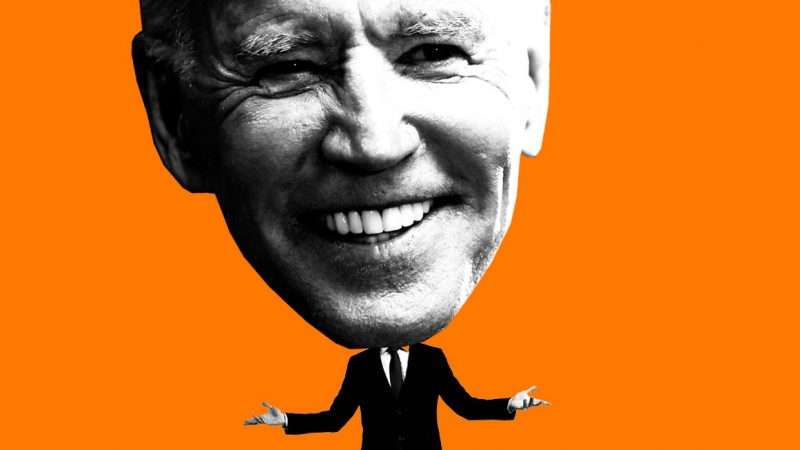 “We need to act big,” declared Treasury Secretary Janet Yellen in a February 4 interview with Good Morning America about COVID spending. The next day Vice President Kamala Harris took those words to heart, wielding her tie-breaking vote to push a package worth nearly $2 trillion through the split Senate, ignoring the official Republican counterproposal to spend a mere $618 -billion.

But the right was far from united behind that smaller (yet still massive) package. The same morning Yellen was on TV, conservative columnist David Brooks was in The New York Times declaring “Biden Is Right To Go Big.” This, of course, was after outgoing President Donald Trump left the country with budget deficits so large that the y-axis on every chart had to be adjusted.

The stated excuse for the spending bonanza is that this is a genuinely unprecedented situation. As Sen. Mitt Romney (R–Utah) put it during a previous relief bill debate, “I happen to be a deficit hawk. I don’t like borrowing money. I don’t like spending money we don’t have. But the time to borrow money—maybe the only time to borrow money—is when there is a crisis, and this is a crisis.”

But President Joe Biden’s agenda is not just about borrowing money to handle the fallout from the pandemic. Somehow, policy makers slid from “never waste a crisis” to “everything is a crisis,” a development that is particularly irksome during an actual crisis.

As he announced his economic team in December, Biden went off-script to make this chillingly casual remark: “You know, the Founders were pretty smart….There’s a reason why all the states and localities have to have a balanced budget, but we’re allowed federally to run a deficit in order to deal with crises and emergencies, as we have in the past.” That line wasn’t written into his script; it was a peek at the cud the man was chewing at the moment. “We should be investing in deficit spending in order to generate economic growth,” he went on.

To Biden—and indeed to nearly all of the mainstream Democratic Party, and much of the Republican Party as well—nearly every policy priority seems to be justified by a crisis large enough to win the Founders’ hypothetical benediction to take on spreadsheet-breaking amounts of debt. Leaving aside the dubious historical validity of such a claim about our bewigged forebears, such statements reveal where the new president and his party are searching for rationalizations for what they are about to do.

Biden’s plans are enormous and wide-ranging. His $1.3 trillion infrastructure proposal is large enough that every week will once again be infrastructure week. There’s $2 trillion in spending for an environmental initiative helmed by not one but two climate change czars. A relative moderate on health care compared to the rest of the Democratic field, Biden plans merely to expand eligibility for and the amount of subsidies available through the Affordable Care Act, at a cost of about $750 billion over a decade. With student debt, the new president has already paused repayment requirements on $1.7 trillion in student loans. He is now pushing Congress to enact loan forgiveness as well, though he has so far declined to go along with more radical proposals for an executive order offering $50,000 in amnesty per person.

Then there are the plans that have less obvious price tags but represent a significant cost in terms of lost growth or hampered innovation, such as rollbacks of previous deregulation; a $15 minimum wage; and the administration’s ambitious yet vague net-zero emissions goals.

All of this may well activate some small-government muscle memory in parts of the GOP. But by embracing or at least tolerating Trump’s highhandedness and free spending—not to mention earlier Republicans’ lack of fiscal discipline—the party traded away a significant portion of its ability to credibly object to big increases in spending and in the scope of the state. And many of the party’s more consistent fiscal hawks flew the coop as the last administration wore them down, so there simply may not be the manpower on the Hill to take a productive stand on this issue. Instead, the field is occupied by a new breed of Trumpian Republicans, like Missouri Sen. Josh Hawley (see page 20), who are more than happy to spend and regulate their way to populist authoritarian ends.

Meanwhile, as Biden staffs his administration with old stalwarts, he is running into a weirdly parallel problem: It wasn’t so long ago that fiscal vigilance and balancing budgets were solidly within his party’s Overton window. Bill Clinton was celebrated for his presidential prowess on this front, and Barack Obama kicked off his first term with a summit on “fiscal responsibility.”

Some of the people Biden initially signaled he might bring into his leadership team lost out because of their historical affiliation with such now-outdated notions. The appointment of longtime policy adviser Bruce Reed to a position of responsibility in the new administration was blocked, for instance, because of his scandalous involvement with the National Commission on Fiscal Responsibility and Reform years ago.

The combination of the political economy of constant crisis and the vague cover afforded by trendy Modern Monetary Theory—which posits that an economic powerhouse in possession of a global reserve currency doesn’t have to worry about deficits because it can always just create more money—makes fretting about debt seem passé and even a bit embarrassing to today’s Democratic movers and shakers.

But convenient new conventional wisdom does not change the facts that debt comes due and that reversing the ratchet in the growth of government is very nearly impossible. There may well be a post-COVID economic boom. But the more the government spends, the harder it will be to grow our way out of the hole we’ve dug.

Libertarians, perhaps more than most, value consistency both across time and across topics. Neither major party has a clean record on debt and deficits at this point. There are still people in both parties who are old enough to remember when fiscal restraint was more than a rhetorical cudgel to be wielded opportunistically. But if old-style small-government Republicans or revivified Clintonites do find their footing in the swamp, there will still be the matter of whether there will be enough of them, whether they can be trusted—and whether there’s anything they can do to turn the tide.