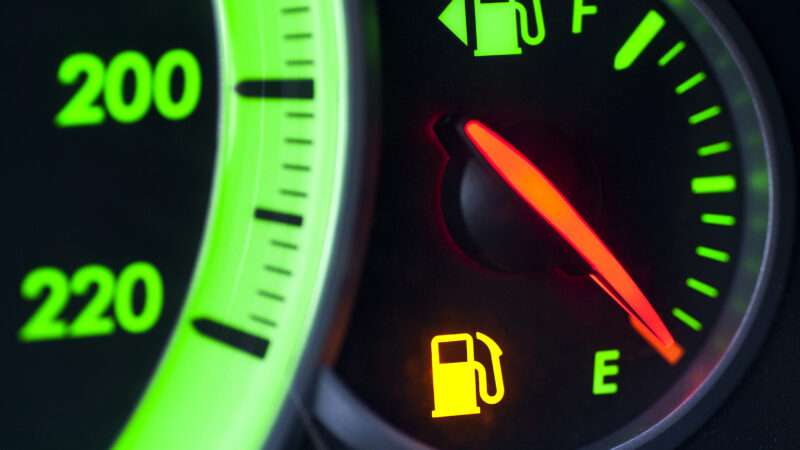 Recent news reports contained some eye-opening news, at least for those of us who are car aficionados: “In a stunning announcement, GM says it will stop making all diesel and gas-powered cars,” according to Motor Biscuit. The planned implementation date is 2035, which isn’t particularly far into the future.

I’m still grumpy about the disappearing manual transmission, and will give up my 332-horsepower 370Z when they peel the shifter from my cold, dead fingers. Whatever one’s views of electric vehicles, private industry is perfectly capable of transitioning away from internal-combustion engines without the heavy hand of California’s bumbling state government.

Flash back to September, when Gavin Newsom signed an executive order that, amid much fanfare, promised “bold action” on the “climate crisis.” It would require every new car sold in the state by 2035 to be emission free, which means a mandate for electric vehicles. “Cars shouldn’t give our kids asthma. Make wildfires worse. Melt glaciers. Or raise sea levels,” the governor tweeted.

The state should only implement such far-reaching regulations through proper legislative channels, not via gubernatorial fiat. Furthermore, Newsom’s virtue signaling ignores some crucial points—e.g., the state’s poor land-management practices have more to do with the then-raging wildfires than the sale of modern vehicles. Most significantly, Newsom’s grandiose order is largely meaningless.

Even though the 2035 phase-out date is the same, General Motors did not make its recent announcement because of Newsom’s edict. The governor and lawmakers who propose similar things in the United States and abroad understand the great advances that the private sector already is making. This is a typical progressive strategy: Pass a “bold” measure that conforms to what industry already is doing and then take credit for being visionary.

Journalists will often take the bait. A recent editorial from The Los Angeles Times used the GM decision as evidence that Newsom’s order wasn’t “fantastical.” Then it called for the state to “spend big now” on an electric-vehicle future—something the administration is gladly obliging.

The Legislative Analyst’s Office recently released a report on Newsom’s 2021-2022 budget as it relates to fees and funding streams to support zero-emission vehicle infrastructure. The governor plans to securitize revenue from Assembly Bill 8, which funds alternative energy and renewable fuel programs, to spend as much as $1 billion on zero-emission vehicle-fueling infrastructure.

In California’s $202-billion budget, a billion bucks may be a rounding error. But it’s still an unnecessary use of tax dollars given that, once again, private industry is busy investing heavily in an electric-vehicle network. If manufacturers want to sell these newfangled cars, they need to provide ways for drivers to charge them. Many people might buy an EV if carmakers could ease their “range anxiety”—the fear of getting stranded without a charge.

Tesla provides a better infrastructure model than the California state government, the latter of which is spending more than $79-billion building a “High Speed Rail” line through the Central Valley that no one (other than bureaucrats and contractors) seems to want.

“The reason why consumers still choose Teslas … is perhaps surprisingly simple. They can drive their Teslas for long distances in full confidence that they will find convenient locations at which to recharge their vehicle,” as the Harvard Business Review explained. Unlike old-line car manufacturers, Tesla invested heavily in a charging network. Others will surely follow.

One of the oddest elements of the governor’s EV plan is, as the LAO explains, its mandate that 50-percent of Clean Transportation Program funds go to low-income and disadvantaged communities. You might have noticed that electric vehicles are popular mainly in high-income areas—and not for any nefarious reason. The median price of a new vehicle in the United States is above $36,000, but it tops $55,000 for an electric vehicle.

Poor people can’t afford new cars and certainly aren’t buying new EVs. EV prices are dropping significantly (13 percent in one year) as competition heats up, but leave it to the government to spend our money to build infrastructure where it isn’t yet needed—rather than to meet the current demands of consumers. And don’t get me started on EV subsidies.

“The vast majority of money in the Baker administration’s electric vehicle subsidy programs is being paid out to households living in the state’s wealthiest ZIP codes,” according to a Massachusetts study by Streetsblog. “(T)he program has barely made a dent in the overall composition of the state’s vehicle fleet” with EVs representing “about one-half of one percent” of the Bay State’s passenger fleet.

It’s not even a slam dunk that EVs will combat climate change, given that they shift pollutants from the tailpipe to the power plant. “Your battery-powered vehicle is only as green as your electricity supplier,” as Scientific American explained. Maybe we should leave it up to carmakers rather than pretend that California lawmakers have the wherewithal to save the planet?