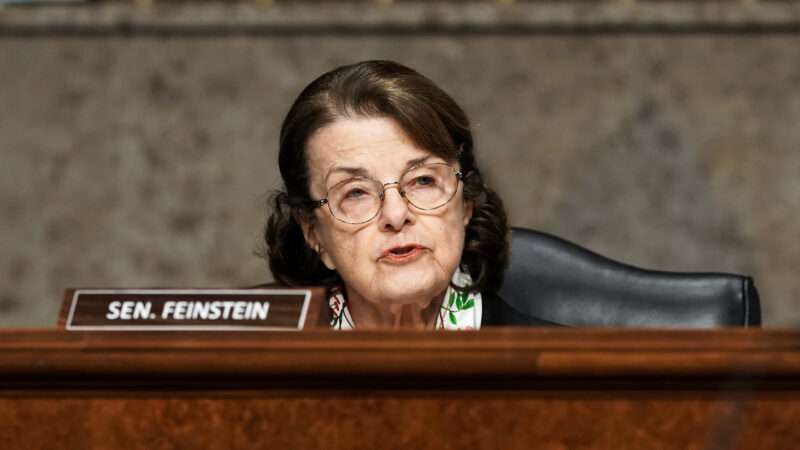 Sen. Dianne Feinstein (D–Calif.) yesterday introduced an “updated” version of her proposed ban on “military-style assault weapons,” invoking “domestic terrorism” as a justification. “We’re now seeing a rise in domestic terrorism,” she says, “and military-style assault weapons are increasingly becoming the guns of choice for these dangerous groups.” Yet her bill, which so far has attracted 34 cosponsors in the Senate, makes no more sense as a response to terrorism than it does as a response to mass shootings.

The Assault Weapons Ban of 2021, like the Feinstein-sponsored 1994 ban that expired in 2004, would prohibit the manufacture and sale of numerous arbitrarily defined firearms, including some of the most popular rifles sold in the United States. It lists “205 military-style assault weapons” by name and also covers other guns with features Feinstein does not like. It would ban any semiautomatic rifle that accepts a detachable magazine and has “a pistol grip,” “a forward grip,” a folding or telescoping stock, “a grenade launcher,” “a barrel shroud,” or “a threaded barrel.”

In contrast with the 1994 definition, which required two or more “military-style” features, Feinstein’s new proposal, like the bills she has been sponsoring since 2013, says one is enough to make a rifle intolerable. Feinstein also continues to fiddle with her list of prohibited features. She no longer thinks we need to worry about bayonet mounts, but she is now sounding the alarm about the ominous barrel shroud, a covering that protects the shooter’s hand from the heat generated by firing a rifle. And while her 2013 list included “a rocket launcher,” that has since been excised, although “grenade launcher” is still there.

Crimes committed with rifle-mounted grenade launchers are about as common in the United States as crimes committed with rifle-mounted bayonets. Even if someone decided to attach a grenade launcher to his rifle, he would have a hard time finding something to launch with it, since grenades are strictly regulated as “destructive devices” under federal law. The rest of the targeted features likewise do not make a gun especially lethal: They have nothing to do with rate of fire, ammunition size, muzzle velocity, or muzzle energy.

President Joe Biden, who supports a new “assault weapon” ban, nevertheless concedes that the 1994 law had no impact on the lethality of legal firearms. The problem, according to Biden, was that manufacturers could comply with the law by “making minor modifications to their products—modifications that leave them just as deadly.” The new, supposedly improved ban does not solve that problem, which is unavoidable when politicians target guns based on arbitrary distinctions.

Yet Feinstein insists that the 1994 ban worked as intended, because mass shootings declined while it was in effect, then rose afterward. Even without dissecting her post hoc, ergo propter hoc reasoning or delving into the debate about mass shooting trends, it should suffice to point out that if Biden is right about the practical impact of the ban, Feinstein must be wrong. If that law left mass shooters with plenty of equally deadly alternatives (which it did), it is hard to see how it possibly could have obstructed them. Nor would the lack of a barrel shroud or a folding stock stand in their way in the unlikely event that Feinstein’s current bill is enacted.

“I’m hopeful that with the new administration and Democratic control of the Senate, we can finally pass commonsense gun reforms to remove these deadly weapons from our communities,” Feinstein says. But even that goal is plainly inconsistent with the terms of her bill. Like the 1994 law, it does not prohibit possession of “assault weapons,” meaning that millions of “these deadly weapons” will remain in circulation even if compliance is perfect.

That grandfather clause makes no sense if Feinstein really believes what she says. Her bill “exempts by name more than 2,200 guns for hunting, household defense or recreational purposes”—a completely gratuitous list that is supposed to show us how moderate and generous she is. But according to Feinstein, the guns she wants to ban are good for nothing but mass murder. The millions of Americans who own them for lawful purposes probably will disagree.