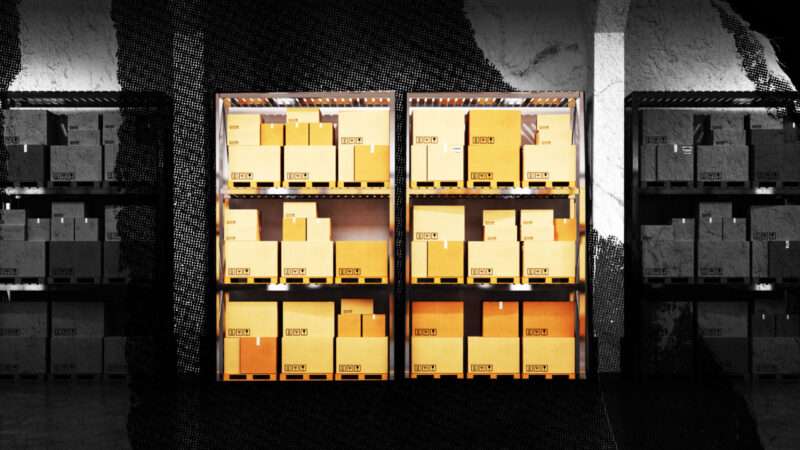 Inside warehouses in Ohio and Maryland, tens of millions of doses of vaccines that could be used to help end the COVID-19 pandemic are stuck in limbo. They haven’t been approved for Americans to receive, but the White House is refusing to allow them to be shipped elsewhere in the world—to countries where they would be used immediately.

It’s a frustrating mix of two problems that have plagued the global response to the pandemic: bureaucracy and nationalism.

The United States has already purchased tens of millions of doses of the COVID-19 vaccine produced by AstraZeneca, even though the Food and Drug Administration (FDA) has not yet approved that vaccine for use alongside the vaccines from Pfizer, Moderna, and Johnson & Johnson. But the vaccine has been approved by the public health authorities in more than 70 other countries—including Brazil, where a major outbreak is threatening to overwhelm the country’s hospital system, and the European Union.

The New York Times reports that the Biden administration is refusing to allow America’s unused doses of the vaccine to be shipped overseas, despite requests from foreign governments and AstraZeneca itself. The company has pledged to replace any donated doses of the vaccine once FDA approval has been granted, according to the Times.

This is nearly indefensible. On the long list of ways that the government has screwed up the COVID-19 response, hoarding lifesaving vaccines that it won’t allow to be used deserves a place at or near the very top.

Since AstraZeneca has not even finalized its application for FDA approval and doesn’t expect to be done for several more weeks, there’s only one rational and ethical option available: Send those doses of the company’s vaccine to places where they can legally be injected into human beings as quickly as possible. Every day that they languish in a warehouse, unused, adds to the pandemic’s length and unnecessarily increases the final death toll.

What’s particularly frustrating about the millions of doses of unused AstraZeneca vaccines sitting in American warehouses is that logistical issues with the delivery of the same company’s vaccines have caused problems in Europe. The company has delivered fewer doses than it had previously promised, and national governments have reacted by engaging in “vaccine nationalism” that does more harm than good.

Last week, for example, Italy blocked the export of 250,000 doses of the AstraZeneca vaccine to Australia by invoking new emergency powers the European Union approved in January. Italy’s government cited concerns about vaccine availability and the slow rollout of vaccination programs across Europe, but Australia is even farther behind when it comes to distributing vaccines.

Elsewhere, the E.U. accused both Britain and the United States of benefiting from imports of European-made vaccines while banning exports to Europe.

Even when trade continues flowing, nationalist policies slow the spread of vaccines. The Economist notes that those new E.U. rules involve more paperwork and greater government oversight of distribution, leading to greater uncertainty about future exports.

All of this feels painfully familiar. Last year, as the pandemic was sweeping the globe, governments imposed trade restrictions targeting everything from medical equipment to pharmaceutical drugs. Data collected by Simon Evenett, a professor of international trade at the University of St. Gallen and the coordinator of research for Global Trade Alert, show that 102 new limits on the export of medical gear were imposed by 75 different governments during the first four months of 2020, as COVID-19 struck.

But those restrictions often caused other problems. The Swiss medical supply outfit Hamilton Medical, for example, ramped up production by 50 percent in response to the outbreak in Europe. But a key component of its ventilators came from Romania, a member of the European Union. Because the E.U. had imposed export restrictions on medical equipment and component parts, Hamilton Medical’s suppliers could no longer ship their wares to Switzerland, which is not an E.U. member.

Getting as many vaccines into as many bodies—not American bodies or European bodies, but human bodies—as quickly as possible is the best way to end the pandemic. But governments are naturally going to prioritize domestic demand for vaccines, and rich countries have an inside track to getting vaccines first. That’s why it is even more important for countries like the United States to set a global example of not hoarding limited supplies of vaccines, behavior which will only encourage others to do the same.

“With all governments expecting their counterparts to act as nationalists and hoard early supplies of vaccines, no one has had an incentive to buck the trend,” warned Chad Bown, a senior fellow at the Peterson Institute for International Economics, and Thomas Bollyky, director of the global health program at the Council on Foreign Relations, in an article published in Foreign Affairs just as vaccines were coming on the scene late last year. “In this environment, ensuring equitable access to early doses of vaccines globally has been treated as a charitable matter—a second order issue to political leaders more concerned about potential opposition at home than outrage abroad.”

Politicians might be able to defend trade restrictions on the grounds that they are looking after their own citizens first. But the Biden administration cannot even make that claim when it comes to the unused AstraZeneca vaccines idling in warehouses.

If those shots cannot legally be given to Americans, they should be sent to places that will use them.

Loading...
"Not by might, nor by power, but by my spirit, saith the Lord of hosts." Zechariah 4:6
BEFORE IT'S NEWS ON TELEGRAM
GET THE TELEGRAM APP - https://telegram.org/ JOIN OUR CHANNEL - https://t.me/BeforeitsNews
Read it..
BEFORE IT'S NEWS
SIGN UP FOR OUR NEWSLETTER
Today's Top Stories
Navy Seal Michael Jaco & Gene Decode: The DUMB Situations 4/17/21 Exclusive Update News Breaking! - Must Video
Lin Wood: Trump Is Q! Epic BQQMS! Proof Plus 3-Yr Delta! Learn Our Comms! Misspellings Are Important! Snowden NSA Q Team!
Biden Denied Entry to Pentagon
ALL of Day #2 Health & Freedom Conference 2021 - Lin Wood, Mike Flynn, Sidney Powell, Mike Lindell LIVE From Tulsa Oklahoma
Trump Tweets Gematria Decode: Dark to Light! Stormy Weather! - Must Video
X22Report: Dr. Shiva - Fascism Confirmed, the Government Is Working With the Corporations, People Must Rise Up! - Video
Simon Parkes & Charlie Ward Q & A! - Must Video
Your Mind Is Infected! - SGT Report Must Video
Is This Trump’s Plan to Impeach Biden & Harris? - Must See Video
Microwave Your Nano Worm Mask and Watch Them Pop! Nano "Worms" Embedded in Face Mask Fibers - Part 2
Loading...
Featured
Global Civilization Expert Fred Markert Talks About America’s Collapse – Part 3: The Future
Greg Hunter & Catherine Austin Fitts: Greatest Violations of Nuremberg Code In History! +Must Video
PENTAGON WILL DEPLOY ACTIVE DUTY TROOPS TO MASS VACCINATION SITES
Georgia Guidestones Were Built by L. Ron Hubbard
Capitol Police IG Confirms ‘Stand Down’ Order Given, Covers Up Name [Video]
Cardiovascular Disease? Don't Give Up - New Studies, Astounding Findings
Bollywood Star Vivekh Passes Away From a Heart Attack 48 Hours After Taking the Jab
RichiefromBoston: Give This To All Your Friends and Family, Or Don't
Trump update 4/17/2021.."Popular" Joe Biden TANKS Like Never Before!! Polls At ALL TIME LOW
Food & job shortages: The ’PERFECT STORM’ for universal basic income?
Top Global
35-Year Old "Fit & Healthy" Mother & Nurse Died Alone After Getting Pfizer's Experimental COVID Double Shot
One Question Before Us Is: Will We Be Destroyed in War Before We Lose Our Civil Liberty to the Establishment’s Orchestrated “Covid Pandemic”?
Japan Plans to Dump 1.2 Million Tons of Contaminated Fukushima Wastewater Into Pacific Ocean
American Delusions About COVID-19 (Those Who Cannot Recognize And Abandon Their Delusions Will Be Condemned To Die In Them.)
Global Civilization Expert Fred Markert Talks About America’s Collapse – Part 3: The Future
This Is How the Deadliest Pathogen Will Be Brought to America & We Are Not Talking Covid! - Dave Hodges Must Read!
New Anti-Russian Sanctions Will Damage Biden’s Intent to Establish Dialogue With Russia
It's Time the West Stopped Meddling in Russia's Affairs
US Withdrawal From Afghanistan May Lead to a Civil War and Proxy Struggle
Sarah Westall: Are Globalists Crazy Enough to Initiate War? They Keep Taunting Russia & China
Loading...
Top Alternative
Is America Turning into a Communist Country?
Common Sense Or Just Not Woke?
The Incredible Adventures of Hunter Biden
Through My Bible Yr 1 – April 18
Strange Biblical Prophecy Announces the End of the World And an Alien Invasion
Secret Societies: The Dark Mysteries Of Power Revealed! Must See Videos!!
Jimmy Dore: “Bounties On U.S. Troops” Story Exposed As Hoax
Is the World Economic Forum’s ‘Cyber Polygon 2020’ Predicting an Upcoming Internet Attack?
American Delusions About COVID-19 (Those Who Cannot Recognize And Abandon Their Delusions Will Be Condemned To Die In Them.)
Science Cannot Create Fulvic Acid