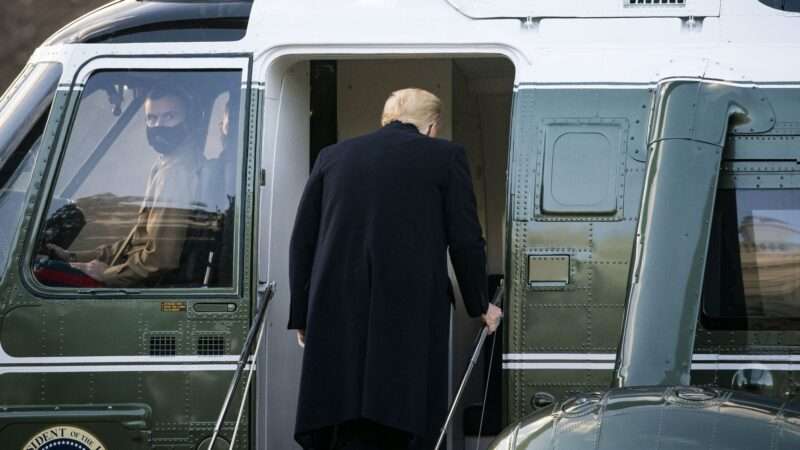 A recent column on a pro-Trump website argued that libertarians such as myself ought to stop supporting third-party candidates and join their side in an effort to stand up to the Left—something of urgency now that Democrats control the presidency, the House of Representatives and the U.S. Senate. It’s an argument I’ve often heard.

“This is an existential battle,” wrote Edward Ring in American Greatness. “Siphoning off voters from the side that’s fighting the hardest to preserve individual liberty and economic freedom is not principled. It is nihilism.” Years ago, that position was at least tenable—back when Milton Friedman, Ronald Reagan and Thomas Sowell energized the conservative movement.

These days, that’s a non-persuasive argument given that the GOP has embraced many policy positions—and attitudes—that have little to do with advancing human liberty. Throughout my career, conservatives and libertarians have been allies on many issues and at odds on others, but now we’re like residents of different planets.

For instance, both groups agreed on the dangers of Soviet expansion. Libertarians, however, warned that giving American security agencies too much power would undermine liberties at home. Conservatives and libertarians worked together to fight progressive assaults on property rights, but libertarians wondered why conservatives couldn’t see how the drug war undermined those goals.

Still, we had many opportunities to work together. Whereas conservatives in Europe never had a problem using big-government to achieve their ends, American conservatives were about “conserving” America’s particular traditions. Our nation’s founding fathers were classical liberals, so conservatives often defended libertarian ideals.

The Trump era solidified long-brewing changes in the conservative movement, as it moved toward a more European-style approach that wasn’t concerned about limits on government power. Trump wasn’t a political thinker, but a marketing savant who tapped into popular and often-legitimate resentments of the increasingly “woke” Left.

In 2020, the GOP dispensed with its platform and passed a resolution stating its enthusiast support for the president’s agenda. Party platforms are unenforceable, but they provide the faithful with an opportunity to create a mission statement. Apparently, being a conservative now means supporting whatever the leader happens to believe.

Such an approach is temperamentally and philosophically non-conservative, as are many of the goals of the Trumpiest wannabes. Sen. Josh Hawley (R–Mo.), best known for giving a fist pump to MAGA protesters before some of them stormed the Capitol, recently introduced a plan to boost the federal minimum wage to $15 an hour.

“(T)he wages of everyday, working Americans have remained stagnant while monopoly corporations have consolidated industry after industry, securing record profits for CEOs and investment bankers,” he said. How does that statement vary in substance or style from something offered by socialist Bernie Sanders?

MAGA conservatives want libertarians to join their tribe, but their publications offer frequent attacks on the free market. The populist right wants to boost federal spending, impose draconian immigration controls, expand the power of police and spy agencies, step up the drug war and, well, stop when you see something of value to libertarians.

Since Reagan, conservatism has revolved around four concepts, explains Jonathan Last in The Bulwark, a right-leaning anti-Trump publication. There was “temperamental conservatism,” which worried about the consequences of progressive social engineering. There also was “foreign-affairs conservatism,” “fiscal conservatism” and “social conservatism.”

“‘Conservatism’ as it is now viewed by the majority of people who identify as conservatives—and who once believed in all or most of those four precepts—is now about one thing and one thing only: Revanchism,” Last wrote. Sure, I had to look it up, but “revanchism” means “a policy of seeking to retaliate, especially to recover lost territory.”

Yes, that “own the libs” approach has muscled out principled discussions about long-held conservative ideals and goals. Last’s column reminds me of Russell Kirk, one of the most influential 20th century conservative political theorists. He, of course, was no libertarian, and saw conservatism as a system of ideas and attitudes rather than a list of policy prescriptions.

Yet those attitudes—slow change rather than dramatic progress, a focus on prudence, trust in human liberty and variety, respect for societal norms, love of virtue, and commitment to social peace—are at odds with the nihilistic bomb throwing of a conservative populist movement that seems as radical at times as its progressive enemy.

“In essence, the conservative person is simply one who finds the permanent things more pleasing than Chaos and Old Night,” Kirk wrote. As libertarians, we’ll be happy to make common cause with our conservative friends once again when they re-discover liberty as the most pleasing permanent thing of all.