On July 5th of this year – following weeks of steady decline – the United States recorded 263 deaths from COVID-19. This was the lowest daily toll in nearly three and half months. The July 5th figure represented a 90 percent drop from the peak which occurred April 21st. On that day there were 2748 deaths from COVID-19 (see worldometers.info for data).

The sharp decrease in COVID deaths was obviously a most welcome development. One would expect it would have quickly generated a spate of celebratory headlines.

However, this is not what happened that day.

Below is a collection of links to some of the news items put forward by US media on July 5:

It is quite astonishing that among these headlines there is no mention of the 90 percent drop in the daily death toll. Reading through them, one would have no idea that there has been such a dramatic improvement. Quite on the contrary, the impression is that things are as dire as ever.

Neither are these items an inaccurate sampling of the kind of material put out by mainstream media outlets that day. The links above have been copied from Drudge Report, America’s leading news aggregator. Having begun with libertarian and conservative leanings, Drudge Report has gone to the other side and became in many ways the mouthpiece for the left-leaning media. This is especially true as far as Drudge’s coverage of Donald Trump and the coronavirus are concerned.

You may think that we are being unfair to America’s journalists. Perhaps they just did not have enough time to write their celebratory pieces the same day. Surely, one would think, the news must have been announced to fanfare in the next news cycle. Let us, then, look at the Drudge headlines from July 6, 2020:

Once again, there is no mention of the great improvement on the COVID front. Looking at the headlines, one would, in fact, get the opposite feeling: the situation is as bad as ever, if not worse. The journalists writing these stories must have been well aware of the steadily improving state of affairs and the record low daily death tolls. There can be no question that this is a concerted and deliberate effort by media outlets to make their readers believe that things are diametrically different from the actual situation on the ground.

What we are looking at here is nothing other than a gross case of journalistic malfeasance whereby mainstream journalists simply refuse to report the truth about the situation. Whenever there is bad news they eagerly amplify and exaggerate while completely ignoring any positive news or developments. To be sure, the shrewd consumer of the news should always be prepared to make allowances for bias and misrepresentation, but the level of cynicism and conniving in this instance is truly remarkable.

There are several reasons for this. To begin with, for journalists every crisis is a boon. Crises make for more dramatic reporting and increased readership. When nothing dramatic is happening, the demand for news naturally drops. In other words, crises are good news and good business for those in the news business. Journalists, therefore, suffer from a natural inclination to increase drama and create the impression of a crisis whenever possible. And the more dire the crisis, the better.

But there is an added political reason why mainstream journalists are so invested in lying about this epidemic. The more people believe that we are in a life-and-death crisis, the easier it becomes to impose lockdowns and quarantines. These in turn wreak disorder and havoc in almost every aspect of our personal and societal life: the economy, commerce, education, finances, family life, interpersonal relationships, etc. The prolonged doom-mongering and shutdowns have also inflicted psychological damage as people suffer from the loss of employment, interruption of schooling and disruption of everyday activities, routines and interactions. Increased rates of anxiety, depression, addiction, relationship abuse and other ills are the inevitable consequence.

The journalists do not seem to mind, since the multiprong mayhem will they helped to unleash will inevitably damage the reelection prospects of Donald Trump for whom the Left harbors a virulent dislike. The antipathy is due to a host of reasons, one of which is Trump’s irritating propensity to occasionally tell the truth. This poses a serious problem for devoted leftists for whom the truth has always been a grave threat, whether they be the communist totalitarians of the past or the woke snowflakes of today. It is not difficult to see why. Even though leftist ideologies may vary in their emphasis and orientation from place to place and from one historical period to another, what they invariably share is their commitment to untruths and wrong assumptions.

Today, for example, the progressives claim with a straight face that someone who is obviously a man – someone who has XY chromosomes and male genitals – is actually a woman. Then they insist that we affirm this absurdity, which is rather difficult for anyone with a modicum of sanity or common sense. Pointing out the obvious pulls the rug from under their ideological enterprise, which is why committed leftists of all stripes are so set on suppressing the truth and destroying its bearers. The cancel culture is a present-day incarnation of this tendency. As someone who is occasionally willing to call them out on their balderdash, Trump is a thorn in their side and the prime target for destruction. True to form, leftwing journalists have shown themselves more than willing to wreck American society by spreading lies and untruths about the coronavirus (among other things) to achieve this goal.

But the good news is that there has been a considerable improvement in the corona situation. Here is a chart taken from worldometers tracing the decline in the daily death rate from the epidemic’s peak which occurred in the last third of April. 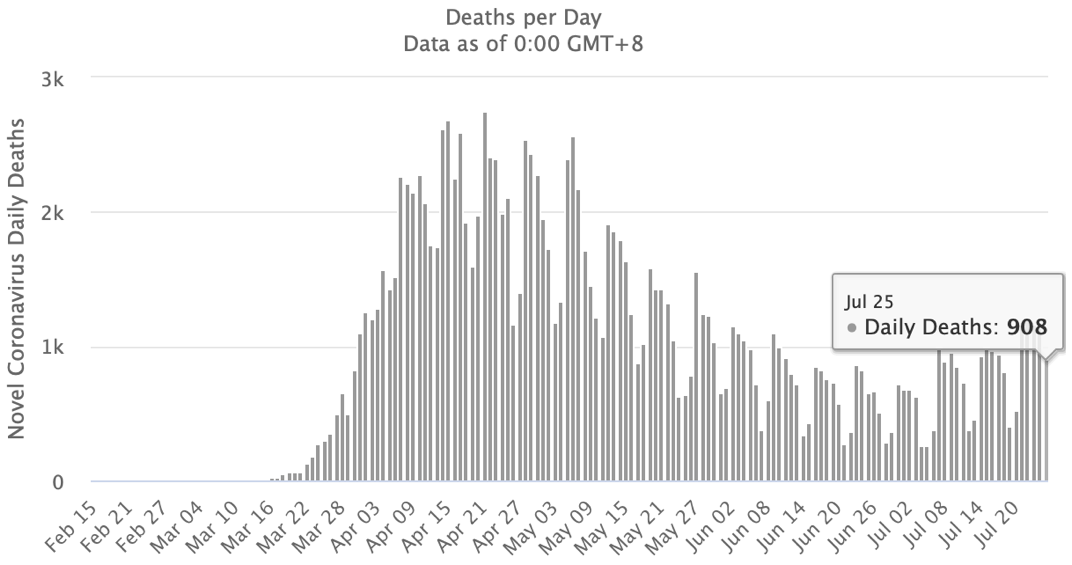 We have already pointed out the unreported 90 percent drop from April 21 to July 5.  You will also note that even in the current spike, the death toll for the last day for which data was available at the time of writing – 908 on July 25 – is 67 percent lower than it was at the peak.

A headline which would honestly summarize this state of affairs would run something like this:

“Despite a recent spike, the COVID daily death rate remains nearly 70 percent below the spring high.”

But this is not what we get. Instead Drudge offers the following:

Notice the death count at the top of the offering. The media have only resumed reporting this item in the last few weeks which saw an increase in this metric. In the weeks prior, when the death count was falling precipitously, they only kept reporting – to maintain the impression of an ever-worsening crisis – the rising case numbers which were largely due to expanded testing. Thus, the media corona template runs as follows: Report mounting death toll in the early stages, case numbers in the decline stage, and death toll again at the spikes. The net result of this selective reporting is that any good news on the ground never makes it to the stories.

Also revealing is the last headline “Health anxiety Soars.” This, of course, is not surprising given all the doom and gloom coverage of the last four months. Through their selective and dishonest reporting, the journalists have managed to con people into believing that the virus is far more dangerous than it really is. The fact remains, however, that the vast majority of those infected exhibit moderate or no symptoms and recover without any great difficulties.

We have recently conducted our own analysis of the data. The breakdown showed the death rates for various age brackets and the results were eye-opening. For individuals under the age of forty the risk is so minuscule as to be negligible. For healthy people aged 40 to 49 the chances of dying are 60 out of 100,000 which is less than one’s yearly chances of dying of an injury.

Even though I had suspected at the outset that the numbers would be low, I did not expect them to come out this low. After obtaining the initial results, I thought that a mistake must have crept into my calculations. I repeated the process several times and then had the figures checked by a math savvy person. The low numbers were, indeed, correct.

The relatively lows risk that the novel coronavirus poses to most people has been pointed out by Dr. John Ioannidis of Stanford University. Doctor Ioannidis is a widely-cited expert on evidence-based medicine, epidemiology, and clinical research. This is what he had to say last month in an interview with a Greek journalist: “For people younger than 45, the infection fatality rate is almost 0%.” The interview and the statement went largely unreported. Dr Ioannidis is not the only world class epidemiologist who has been censored from mainstream news for his data-based conclusions. Rather than consulting these serious scientists, the media’s favorite go to person for all questions corona has been the camera-hungry but otherwise hapless Dr. Fauci who has made a number of statements and predictions that have turned out to be spectacularly incorrect.

The failure of major media to report truthfully is inexcusable, since accurate information would enable our society to deal with this crisis in a more reasonable manner. But this is apparently not something the leftist journalists wish us to do. Instead they try their best to keep us ignorant and frightened in order to wreak havoc in America, hoping to sink Trump. And if American society should be ruined in the process, so be it.

It is difficult to recall any period in living memory in which manipulation of information by major news organizations reached such levels of cynicism. What we are witnessing these days is a most severe case of journalistic malpractice.