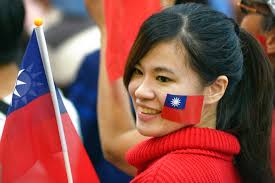 And Not To Provoke China
Image from scmp.com

The unusual news that Taiwan’s legislature passed a bipartisan bill asking the foreign ministry to seek formal relations with the US puts a clear point on the latest round of China-Taiwan tensions.  It also puts a distinct strain on the old US approach of “strategic ambiguity” around Taiwan.  Regardless of the outcome of the U.S. election, the next administration will need to craft a new approach.

The “we agree that it’s your territory but reject forcible reunification” stance begs the question of America’s interest in Taiwan’s status.  The U.S. could defend Taiwan as a matter of non-violence, to avoid economic disruption, to keep geopolitical stability – or to stand up for democracy.  At a time of deep-current shifts in world affairs, it is crucial that America’s stance carries our deepest values.

Ambiguity has shaped Taiwan policy and overall China policy alike.  One justification is that giving up ambiguity means risking some major interest.  In the wide range of interests at stake, policy makers have not wanted to hazard that risk.  But as a result, even we don’t know why we do what we do, or don’t do, vis a vis Taiwan, or China generally.   The problem is that China, the rest of the world, and we ourselves, don’t know what America’s first priority is.  The problem in that is that everyone is left to interpret our motives, and assess our character, on their own terms.

The Trump administration has confronted China on a range of issues, from trade to technology, security policy and human rights.  But undifferentiated confrontation with China leaves open the idea that “China bashing” is simply a Realpolitik move to contest global dominance.  It is not only the Chinese who might take this view.  In a way it carries the same problem as ambiguity, only in unfriendly terms.

America was founded in the name of unalienable rights, and government existing to secure them with consent of the governed.  We must display that as our baseline motivation, not merely as another tool to oppose China.  If our intentions, however bent by circumstance, do not carry that conviction at bottom, then the nation founded in 1776 is absent and the institutional edifice built in its name has no foundation.  On the other hand, if we follow our foundation, Americans see our own common purpose, and the world hears us voicing our own core convictions.

There is a concern that supporting Taiwan for the sake of our principles, opposing China’s forays for the same reason, could lead to a zero-sum Cold War.  The risk is that the loser ends up as a version of the Soviet Union in 1992.  Of course America can always choose to stake its existence on the power of its founding ethos.  We do every day, in one sense.  But we can also look for ways to avoid provoking a desperate existential resistance from China.

First, we must be crystal clear that we oppose China for its transgressions against freedom, for principle rather than for vested interest.  An Indo-Pacific coalition that includes Viet Nam would signal strategic interest taking priority over principle.  We also cannot “trade Taiwan” for trade or technology concessions, in any form.  On the other hand we should try to avoid irreconcilable fundamental hostility.  At least a long term possibility of some philosophical commonality must, and can be found.

What could that be?  Perhaps, as one very low-level compatibility, U.S. policy can note that the Chinese Communist Party is organized for the public interest, in contrast to clan or factional dictatorships.  The U.S. stance might then hope for the two sides to grow into further commonality in standards for government – from this very low level.  Perhaps Chinese doctrines could evolve: Chinese philosopher TongDong Bai, in his “Against Political Equality,” imagines a neo-Confucian governing scheme with a popularly elected lower legislative house.  If U.S. policy signals a relaxation of opposition as such forms might evolve, it defuses the zero-sum nature of the rivalry.  Even as far off as any such developments might be, they mark a path toward convergence and away from intransigent hostility.

Meanwhile we retain a rationale for defending Taiwan.  Of course we already do, and if we see a way, however remote, for some eventual conceptual compatibility with China, we can assert that that defense of freedom does not aim at subverting China.  Our aid to Taiwan essentially aims to make a Chinese invasion prohibitively costly rather than to attack China.  And against any pacifist’s citation  of John Quincy Adams’ injunction against going abroad seeking monsters to destroy, we are already defending Taiwan, and Adams in that same speech declared American would always be a friend to anyone pursuing liberty.  Abandoning an existing commitment would compromise that ethos.

In short, we are already committed to protect Taiwan, we can do it without professing existential hostility to China, and America’s own existential tenets demand our defense of that democracy.