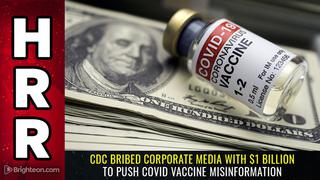 According to ace reporter, Emerald Robinson, Blaze Media has uncovered thru FOIA requests that the Biden Administration was covertly funding hundreds of media companies to suppress news of COVID vaxx adverse events and boost good news propaganda about the vaccines.

According to Emerald Robinson:

“… so-called ‘conservative’ media organizations took money from the Biden administration to spin positive stories about deadly and ineffective vaccines to their conservative viewers who were right to be suspicious – and did not disclose it.”

“In response to a FOIA request filed by TheBlaze, HHS revealed that it purchased advertising from major news networks including ABC, CBS, and NBC, as well as cable TV news stations Fox News, CNN, and MSNBC, legacy media publications including the New York Post, the Los Angeles Times, and the Washington Post, digital media companies like BuzzFeed News and Newsmax, and hundreds of local newspapers and TV stations. “

“These outlets were collectively responsible for publishing countless articles and video segments regarding the vaccine that were nearly uniformly positive about the vaccine in terms of both its efficacy and safety.”

This report has always told you the truth about the vaxxes, and paid a very heavy price for doing so, and now we know why – the Coup could not allow any voices countering their fake news message, paid for with nothing but bribes from the public purse.

This vaxx hoax was the largest and most irresponsibly dangerous medical experiment in history and it is now all coming out. The question is, will FoxNews and NewsMax confess their sins? Probably not. Why? They now have the blood of millions of Americans on their hands who succumbed to the vaxx hoax.

We have put on honest scientists who have sounded the warning bell for many months now, and as a result, our channel has been banned from YouTube and our income has plummeted by 90%.

And in the hopes of covering it up, the corporate media is now filling their air with Ukraine invasion news – an invasion which the United States military could stop dead in its tracks on any given day. But they won’t. Why? Because the Biden/Obama/Clinton regime were the real colluders in Russia hoax and the China bioweapons attack against western civilization in general, and the United States of America in particular.

According to Emerald Robinson:

“We have just lived through the most extensive propaganda campaign in the history of the world and it was paid for with taxpayer dollars. You paid for it. I paid for it. We will probably never know how much money was spent because, according to a source familiar with the FOIAs, the Biden Administration won’t release the amounts under their “trade secrets” exemption.”

It will be so interesting to see which of the big-3 Fox hosts dares to cover this story tonight.

We demand to know how much was taken and when these bribes were given and in what form were they given.