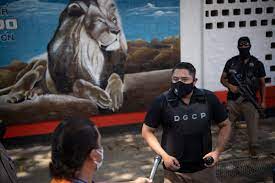 On the weekend of March 26th, the notorious MS-13 gang went on a massive killing spree in El Salvador which left more than 70 people dead by Sunday. Even for a country where powerful gangs hold massive sway, this recent tragedy stands out considering that it was the bloodiest day on record since the civil war ended 30 years ago. The current president of El Salvador, Nayib Bukele, campaigned and won the election three years ago on a strict law and order platform. Mr. Bukele, only 40 years old, is largely well liked in his country, with an approval rating of 85 percent. Until this recent killing spree, violence in El Salvador had dropped significantly, from 105 homicides per 100,000 in 2015 to 17.6 homicides per 100,000 in 2021. Bukele was credited as contributing in large part to this drop in deaths, which makes these recent events a potential upset to his public image. The government reacted swiftly and firmly to the massacre, arresting more than 1,000 suspected gang members, cutting food rations in the prisons, and seizing inmates’ mattresses. In addition, El Salvador’s Congress declared a state of emergency that suspends constitutional guarantees of freedom, allows police to conduct deeper searches, and restricts suspects’ rights to legal representation.

The real question is, why would gang members embark on such a bloody rampage? Many of the victims had no real connection to any Salvadoran gang, which leads many to assume that the killings were intended more as a means of sending a message to the government. If there is a message which the gang members are intending to send, it is likely related to allegations that President Bukele’s government established a truce with the gangs MS-13 and Barrio 18 back in 2019. The US government as well as major media sources such as El Faro claim that Bukele’s administration gave gang leadership financial incentives and perks for imprisoned gang members in return for assurances “that incidents of gang violence and the number of confirmed homicides remained low.” While President Bukele denies that any conversation and truce ever happened, many believe that the killing spree was an attempt by the gangs to let the government know they want to renegotiate the terms of the agreement. If these allegations are true, it calls into question the success Bukele appeared to have with reducing gang violence, as well as the ethics surrounding the negotiations.

While negotiating with criminal organizations is morally and legally frowned upon, there have been instances of it resulting in a drop in violence in other Latin American contexts. In Brazil, negotiations between the state of São Paulo and the gang First Capital Command (PCC) in 2006 resulted in homicides falling for years afterward. Similar negotiations between the government and gangs have occurred in Colombia, Ecuador, Haiti, Honduras, and Mexico. The fact that these talks are not a rarity is tantamount to the sheer power of the gangs, as well as the inability of officials to combat them with official means. The recent killing spree clearly shows that such negotiations are not failproof when it comes to stopping gang violence. However, the brief drop in violence during Bukele’s first three years in office demonstrates that there may be some merit for entering into such negotiations in the first place.

Graham Nau is the Assistant Editor at the Foreign Policy Association.