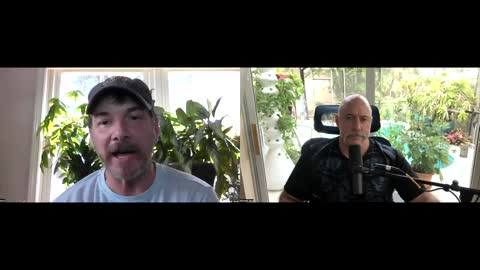 I began my Lyme research after I was bit in 1993. Lab 257 on Plum Island was the beginning here. 2004, before these things were scrubbed from the internet, I found the patent on Borrelia Burgdorferi- what we call Lyme. This patent was issued to the USDOD. We call it Lyme because of the first mass infection of kids in Lyme Connecticut. If these two would like a real education on Borrelia Burgdorferi (Lyme), they can contact me.

Plum Island Lyme complex is the Willli Burgdorfer, German name but Swiss, but still knowingly involved in US bioweapon engineering using ticks, borelia burgdorferei spirochete, plus babesia. One coverring lie was Alan Steere of Yale and CDC claiming Lyme was babesia and nothing but. Fort Detrick Lyme complex travels by a different tick and is principally just the spirochete plus the target ring. The target ring is caused by what Willie B called Swiss Agent, which is ricketsial helvetica, a gram negative aerobic bacteria causing the target ring aka travelling red line or in latin, erythry migrans, ECM chronic or EM. Swiss Agent was for a while said to be the defining symptom of Lyme. Ricketsial helvetica bacteria was said to be the defining symptom of spirochete infection–LOL science.

Lyme and co-infections are insidious. The allopathic medical field is in denial and just plain ignorant. I will also say willfully incompetent in this area. People are becoming incapacitated quickly and living in agony. Yes, many die. Five out of 5 Alzheimer patients who died were found to have Lyme spyrochetes in their brains. The best doctors are those who contracted Lyme and figured it out for themselves. These are the doctors who do help people. Once infected, it’s not easy to recover. Personally I used multiple pathways for myself. It wasn’t so easy for the dog who got Anaplasmosis from the ticks which I believe contributed to his demise. Big myth: the bulls eye. Most don’t get that but do become ill. If out in the outdoors often, invest in a homeopathic Lyme and co-infection nosode (like a vaccine but without the side effects). Take it ongoing to keep yourself well.

John Krol here from Clearwater, FL and I was diagnosed in 1995 NYC with lyme disease when I was a NYC Transit Police Officer and at that time they did tests in all parks in NYC running a white rag through the grass and it was determined that lyme disease was present in all the parks. Who does that? It had to be another test by the CIA. It was in a local paper.

Several years ago, I was diagnosed with two different types of Lyme’s disease. My family doctor did not test me for it, but my Naturopath doctor did. I went to the Naturopath doctor because of health issues and my family doctor wasn’t helping or even testing. My immune system fought the Lyme and won but the memory is still in my cells. One of the Lyme positive tests was for an Asian tick. My family doctor had to report both positive tests to the CDC. The CDC said to retest me for the Asian Lyme because they believed it was a false positive and said there were no Asian ticks in Maine. I retested 3 weeks later and again tested positive for the Asian Lyme. A few years later the CDC reported there were Asian ticks in Maine. I had never been outside the country, so I did not bring it in from somewhere else. In Maine, family practitioners do not test for Lyme. The only ones doing that testing are Naturopath doctors and once you test positive the family doctor is notified and they take it from there. My doctor has never given me any meds for Lyme or even suggest I do anything different. This is not just my doctor but the majority of doctors in Maine. When I was in my twenties, I used to go to many campgrounds following Bill Chinnock and his band which I believe at that time may have been the E-Street Band. Bill was diagnosed with Lyme disease and eventually took his own life to escape the pain. No one knew how to treat Lyme and family doctors still do nothing. Here is one of Bill’s songs. In my opinion he was a better man then Bruce Springsteen and a better singer. He loved Maine and Maine people, and we loved him. https://www.youtube.com/watch?v=PdeqddxobX8 Bill Chinnock – Dime Store Hero.