Tesla seems to favor the double-paned window design that the company adopted for the Model Y crossover. The new strategy is being used on pre-refreshed designs of the Tesla Model 3 and was spotted on a build of the all-electric sedan in Belgium.

First spotted by user toudimi of the Automobile Propre forums, Tesla has started installing the double-pane glass on the Model 3. It was an import from the company’s Fremont factory in Northern California, but it is not a part of its “refreshed” version of the car, which was unveiled several weeks ago on Tesla’s design studio, sporting numerous quality and design changes. 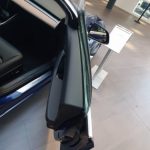 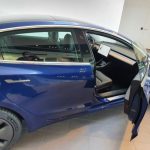 The use of double-paned glass is a common tactic used for sound reduction and insulation, but it is usually equipped in luxury vehicles. However, Tesla has had a notable issue with cabin noise in the Model 3, which shares a strikingly similar design to the Model Y. Cabin noise is naturally occurring while the vehicle is in motion and can be attributed to wind and road sounds. An electric vehicle’s lack of a loud, gas-powered engine, which usually dampens these noises, makes it an ideal candidate for owners to experience increased amounts of sounds inside their cars. After complaints from owners during the early months of Model 3 production, Tesla made several insulation changes to the cabin. Additionally, sound dampening foams were inserted in some of the tires that came with the car.

Nevertheless, Tesla still had issues with owners complaining about cabin noise, even though it had improved significantly. Double-paned windows were evidently the next option, and now Tesla is spreading the tactic to the Model 3.

Interestingly, adopting the double-paned windows on a pre-refreshed Model 3 shows Tesla is working to create updated versions of its vehicles consistently. Although the refreshed version equips chrome delete, a new center console, new wheels, and a powered trunk, the “old” version of the company’s mass-market sedan will get updates.

Evidently, the double-paned glass was adopted well before the car’s refreshed version was released to the public. A constantly improving vehicle, the Model 3 has been changed more times than many Tesla enthusiasts know, as the company continues to do whatever it can to make its cars better than before. If a change is needed, Tesla equips it and doesn’t ask questions. The cabin noise was an obvious issue, and Tesla may have finally found the correct tactic to combat it.