“Today, with the strong support of Shanghai governments at all levels and Tesla’s rapid advancement, the Tesla Shanghai Supercharging Pile Factory was officially completed and put into production, representing the industry’s leading third-generation Supercharging pile (V3) was officially off the assembly line,” Tesla’s China Charging Team wrote on its official Weibo page.

Tesla announced that it would begin producing Superchargers in Shanghai at a dedicated plant on November 5th, 2020, with the intention of widening the availability of its charging infrastructure in the country. Tesla has seen some astronomical growth in sales, and thanks to the introduction of the Model Y in China, figures are only going up. The need for a Supercharger expansion has been recognized by the electric automaker. In just over two months since the announcement, the plant is online and producing Tesla-specific charging stalls. Tesla did state that the project was officially erected in August 2020, making it just over five months that the project was completed from start to finish. 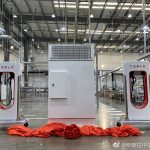 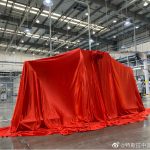 Tesla planned to invest ¥42 million, (6.4 million USD) into the new factory, but the company did not disclose the final cost of the facility in its announcement.

In 2020, Tesla focused not only on ramping up its production and delivery processes in its initial year in China but also on the Supercharging rollout so that owners could charge their vehicles.

Reuters wrote in its November report of the Supercharger plant that the facility will be located near Giga Shanghai, Tesla’s Chinese production facility. The plant already produces the Model 3 and Model Y, but thanks to overwhelming support for the automaker, Tesla is planning to bring on a Design Director to handle new vehicles in China.

CEO Elon Musk indicated during the company’s recently held Q4 2020 Earnings Call that China is a hotspot for Tesla’s vehicles, and the support the company has received has been astounding.

“Well, we currently are winning that — we are currently the leader in the Chinese EV market. So I think we’re mostly doing something right if we’re the best-selling electric car in China,” Musk said. The Model 3 held 11% of the total EV market share in China in 2020, selling 139,925 vehicles, the EV Sales Blog reported. The second closest competitor was the Wuling HongGuang Mini EV from GM, with 119,255 total sales.