The Tesla Cybertruck has come home, at least to some degree. As could be seen in recent pictures and videos from Giga Texas, the all-electric pickup truck recently paid a visit to the upcoming EV factory. The Cybertruck’s Giga Texas visit was confirmed by Elon Musk, who noted that he drove the vehicle around the massive construction complex.

Initial images of the Cybertruck’s visit to Gigafactory Texas were shared by the electric vehicle community in the r/TeslaMotors subreddit. As seen in the pictures, the all-electric pickup attracted a lot of attention from Giga Texas’ workers. The vehicle also looked at home in Giga Texas’ construction areas, with its muddy tires and stainless steel body. 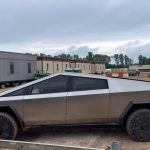 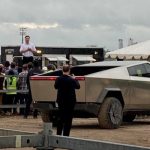 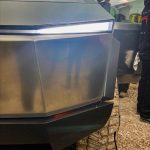 As per Elon Musk, he actually drove around the Giga Texas complex behind the wheel of the Tesla Cybertruck. Other photos of the visit also showed Musk addressing a crowd of Giga Texas workers, many of whom seemed to be drawn to the massive all-electric pickup truck. This was true not only for the Cybertruck’s exterior but also its interior, which features a yoke for its steering system and a 17″ display, like the Model S and Model X refresh.

I was just there, driving Cybertruck around the site where it will be built!

Interestingly enough, the Tesla Cybertruck that Elon Musk drove around Giga Texas seems to be the same prototype that the company unveiled back in 2019. This was partly due to the presence of door handles, a part that would not be present on the production vehicle, as per Musk’s previous “tease” on Twitter.

The Tesla Cybertruck is arguably one of the most highly-anticipated vehicles in Tesla’s history, with Elon Musk noting that the unusually-shaped pickup truck has seen demand that’s far above the company’s expectations. The vehicle is expected to start pilot production sometime this year, though Musk, for his part, has proven to be quite conservative about the Cybertruck’s initial manufacturing timeframe. 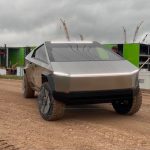 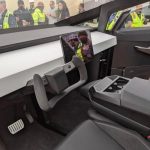 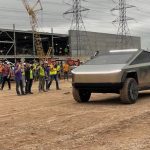 When asked if the Cybertruck is set for initial deliveries later this year, Musk simply noted that the limited production of the Model Y would start at Giga Texas sometime in 2021, with mass production hitting its pace next year. This, according to Musk, was a timeframe that should also be true for Gigafactory Berlin. As for the Cybertruck, its initial production phase would likely depend on how fast IDRA could ship its 8,000-ton Giga Press–a house-sized machine that would create the electric pickup’s rear underbody–to Gigafactory Texas.

Watch the Tesla Cybertruck take on some of Gigafactory Texas’ muddy roads in the video below.

The post Tesla Cybertruck pays visit to Gigafactory Texas with Elon Musk behind the wheel appeared first on TESLARATI.