The Tesla Cybertruck has been spotted in a company showroom in the Meatpacking District of Manhattan, New York, ahead of CEO Elon Musk’s appearance on Saturday Night Live tomorrow evening.

The Cybertruck was spotted by Steven Brennan, who took multiple pictures of the all-electric pickup from Tesla at the company showroom located at 860 Washington Street in Manhattan. 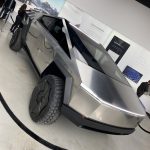 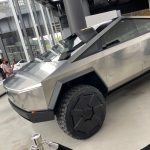 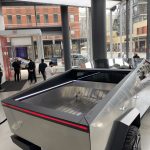 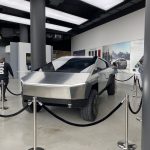 Since the Cybertruck’s unveiling in November 2019, the vehicle has made several public appearances. Some have been planned, like the Cybertruck’s scheduled appearance at the Petersen Automotive Museum in Los Angeles in 2020, and most recently, at Tesla’s Giga Texas construction site right outside of Austin, Texas.

The Cybertruck was brought to New York City ahead of Musk’s highly-anticipated appearance on SNL tomorrow. The CEO has been in New York since Monday, where he landed at New Jersey’s Teterboro Airport and presumably made his way into Manhattan just hours later. However, in typical Musk style, it wasn’t a simple appearance and week in New York. It appears he coordinated an appearance for the Cybertruck also to visit the Big Apple ahead of his SNL hosting alongside musician Miley Cyrus.

Elon Musk shares update on SNL appearance, says everyone is being friendly

One of the most heavily contested designs in the history of the automotive sector, the Cybertruck is composed of a stainless steel “exoskeleton,” along with bulletproof glass and several other highly durable features that make it one of the most robust and strong vehicles available to the general public for purchase. While the Cybertruck has been under slight revisions from Musk and other Tesla engineers, he updated the world on the modifications the company plans to make during a recent episode of the Joe Rogan Experience Podcast.

While the Cybertruck will remain relatively identical to the vehicle Tesla rolled out onto the stage in Hawthorne, California, in late 2019, the company did raise some concerns about the sheer size of the vehicle after a taping of Jay Leno’s Garage in 2020. Leno, a car enthusiast who has visited Musk in the past to talk about the original Tesla Roadster, wanted to take the all-electric Cybertruck into the Boring Company tunnel in Los Angeles during the episode. A tight squeeze seemed to be one reason why Musk was second-guessing the size of the truck, along with some concerns from potential buyers who feared that the vehicle wouldn’t fit into a residential garage or parking space. Therefore, Musk told Rogan on the podcast that Tesla had made the vehicle slightly smaller.

“That’s pretty much what it [the Cybertruck] will look like, with very small differences. You know, we adjusted the size a few percent. Like around 3% or smaller. You don’t want it to be a couple of inches too big for the tunnel.”

The Cybertruck is still slated to begin production later this year at Giga Texas. Musk believes that if Tesla “gets lucky,” a few deliveries will happen before the end of 2021. However, he expects volume production to take place in 2022.

Let us know what you think in the comments!