To fully understand the Deep State one need focus on matters both inside and outside of government. The Deep State corrupts everything it touches. Today that includes much of the country.

The Deep State corrupted the media. 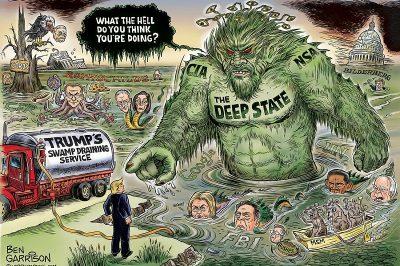 The first task of any State is to control the information (propaganda) fed to its citizens. Totalitarian states eliminate any free exchange of opinions. The Soviet Union had a state-run newspaper known as Pravda. It was a monopoly in that no other sources legally provided news. The new Russia pretends it has press freedom, but it controls the media. So does China. Severe penalties, including murder, are used to obtain conformity.

In the US, we say we have freedom and a “free press.” But do we?

The answer regarding freedom is increasingly negative, at least when compared with our history. The issue regarding a “free press” is a bit more complicated. America’s press, while not owned by the State, is under similar restrictions as the press in more totalitarian states. These restrictions are not officially codified in law but are understood by the media. They result from the fact that the US government has the power to bankrupt any person or corporation it chooses to target.

With this kind of power and the willingness to use it, the Deep State need not own corporations.

The recognition that the Deep State can “kill” any corporation it chooses explains why the “free press” (or literally any other person or company) is not truly free. There is no corporation or individual that does not break the law every day in some manner. These violations are not intentional nor are they even known by the actor. There are too many laws that none of us don’t violate several of them, unknowingly, every day.

This type of society is not socialism in the normal sense. Actually, it is more like fascism where private ownership is allowed but behavior is so subject to government rules and regulations that it is government that actually drives behavior.

While we think of the media as independent companies operated in local markets, they are hardly that. Most media giants control local markets. US media (as most large corporations) is “owned” by the State because of the State’s arbitrary and immense regulatory and punative powers. To understand how easy it is to influence/control media, this information sent by a reader is useful:

This is what you call a  “stacked deck.”   Info like this can be a great benefit to the general public and  help more and more people to wake up to who their real enemies are 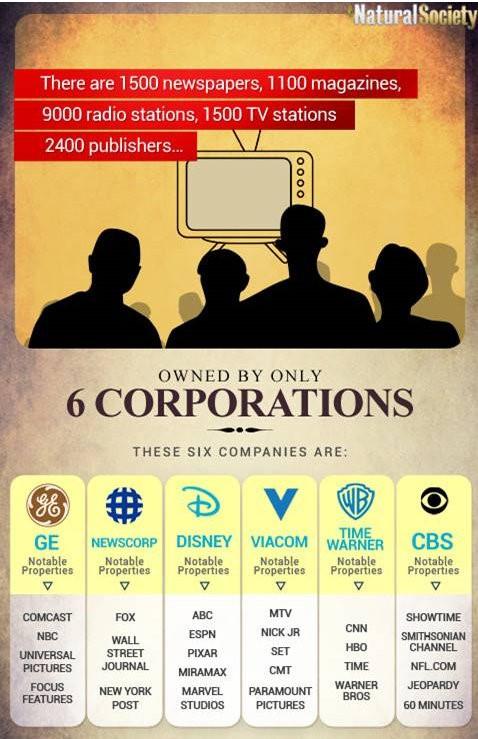 IF YOU HAD A HUNCH THE NEWS SYSTEM WAS SOMEWHAT RIGGED AND YOU COULDN’T PUT YOUR FINGER ON IT, THIS MIGHT HELP YOU SOLVE THE PUZZLE.

This is “Huge” and is   only  a ‘partial’ list since the same holds true for NBC/MSNBC and most media outlets.
Trump has been right all along. Fake News is generated by these incestuous relationships .

Obviously the relationships are more numerous and deeper than those listed above. Compounding the executive conflicts is the crossover between politics and journalism. George Stephanopoulos, John Brennan, Jason Chaffetz, James Clapper and others slide easily from the Deep State into the Deep Media.  The reverse is also common. This incestuousness is not limited to the media.