Yeah, grassroots, except for that whole Mike Bloomberg money https://t.co/k0s1hjOJxk 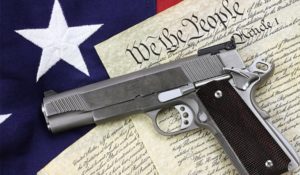 Moms Demand Action is a grassroots organization advocating for stronger gun control measures, founded as a Facebook group the day after the that took the lives of 26 people, 20 of whom were young children. But while its members advocate for an assault ban, Moms Demand Action founder Shannon Watts says that it’s a “misnomer” to call the group anti-gun.

“Often people think that because we’re doing this work, we’re anti-gun or we don’t support the Second Amendment. Nothing could be further from the truth,” Watts said in an interview with CBS News chief Washington correspondent Major Garrett in this week’s episode of “The Takeout” podcast. Watts noted that many volunteers the organization were gun owners or married to gun owners.

“This is simply about restoring the responsibilities that go along with gun rights,” Watts said. She added that while the top priorities for Moms Demand Action are background checks, red-flag laws and disarming domestic abusers, the organization also advocates for an assault weapons ban and has worked with municipalities on the issue.

She is right, because it is a misnomer to call the group anti-gun and anti-2nd Amendment: they are also very much anti-4th Amendment, being happy to remove people’s due process in order to take their guns. Anyhow, if they are calling for taking away people’s guns, at least relating to law abiding citizens, which they are, then they are anti-2nd Amendment. They do not advocate for making sure that Red Flag laws protect other Constitutional rights, that they aren’t abused (even the ACLU is worried about Red Flag laws), they advocate for no provisions for protection.

Shannon runs Mom’s Demand, which is funded via Everytown, which comes from billionaire Mike Bloomberg, and, all her tweets seem to be about electing people who want to enact massive gun control on law abiding citizens and blaming guns for crimes.

While on the subject of firearms, let’s check in with another loony Democrats

Gun violence activist Robert Emmons Jr. is 27 years old and running for Congress in Illinois’ 1st District, seeking to unseat Democratic Rep. Bobby Rush, who’s been in office for most of Emmons’ life.

Emmons, a progressive newcomer who is pushing for a Green New Deal and “Medicare for All,” is placing gun violence at the center of his platform. His district, which includes Chicago’s South Side, is one of the areas of the city with the highest rates of shootings. He moved to the lower-income area as a young teen and lost a close friend to gun violence in 2015.

“We know what causes gun violence in our district,” Emmons said in his campaign video. “It’s not lack of morals… it’s systemic poverty, it’s educational inequity.”

He sees the solutions to gun violence in his district and beyond not as more law enforcement or even stricter gun laws ― Illinois already has some of the strictest gun laws in the country ― but rather as providing a living wage, making health care affordable, eliminating student debt and more.

Very interesting. The majority of this casual gun play occurs in the same Democratic districts and cities, where the people (mostly blacks, because Democrats love blacks down on modern day plantations) are given money, free health care, and so forth. Not many in those uber-urban areas are going to college and racking up student debt, and, really, does anyone think that having student debt makes someone want to pick up a gun and go on a rampage?

If there’s educational inequality, well, Democrats run this. They run the cities and the school systems, do they not? Perhaps they should be teaching some morals.


Source: https://www.thepiratescove.us/2019/10/20/hot-take-moms-demand-action-is-not-anti-gun/
BeforeItsNews Announcements
Step 1: Get the Telegram App & Get Stories Direct to Your Phone or Computer Without Censorship! Get the Telegram App in the App Store or at
https://telegram.org/

Loading...
"Not by might, nor by power, but by my spirit, saith the Lord of hosts." Zechariah 4:6
Read it..
BEFORE IT'S NEWS
SIGN UP FOR OUR NEWSLETTER
Today's Top Stories
Sarah Westall: Whistleblower Brutally Beaten, Coronavirus Explained From Chinese Healer, Hired Mercenaries
Q: Hollywood Is Burning! Is Barron Trump Q? Barry's Belated Impeachment? Best Is Yet 2 Come! - Great Video
Billy Meier Predictions and Prophecies Are Now Being Proved Correct
Whistleblower found dead
Worldwide Virus Alert! Millions Infected & Spreading! - Must See Video!
Mark Taylor: Q! Gloves Are Off, Fight Is On
The Billions Are Gone! Disappeared!
David Abel Exposed As Crisis Acting Freemason On Board Diamond Princess Cruise Ship
The Donald: The Serpent Seed From the Royal Bloodline/Tribe of Dan (Have You Been Snared by Trump?)
PLAGUE Upon Us? 3 MUST DO'S To Combat CORONAVIRUS
Loading...
Featured
Greg Hunter: Covid19 Real Beast Causing Dangerous Pandemic! China Virus Is the Real Deal, Get Ready! – Chris Martenson Must Video
The Government Has Lost Control of COVID-19
31 Updated Reasons why we should close our borders to fight the spread of the deadly Wuhan Bio-Weapon Coronavirus Virus Pandemic by Kyle Kenley Kopitke, 22 February, 2020
PLAGUE Upon Us? 3 MUST DO'S To Combat CORONAVIRUS
Colorado Cop With WWJD Bracelet Murders an Unarmed Man
Bombshell Secrets Revealed! Behind the Veil of Mass Deception: Just How Fake Is the [Fake News]?! Great Video!
"Turn Off Your Camera and Step Out of the Car" New York State Extortion Stop
Did a Senior Chinese Military Intelligence Officer Call the Coronavirus a Hoax or Did Dean Koontz Write A 'Novel' Virus Sequel?
The 5G Trojan Horse: What You’re Not Being Told
‘Whom the Gods Would Destroy – They First Make Mad’ – COVID-19 Hysteria Goes Global