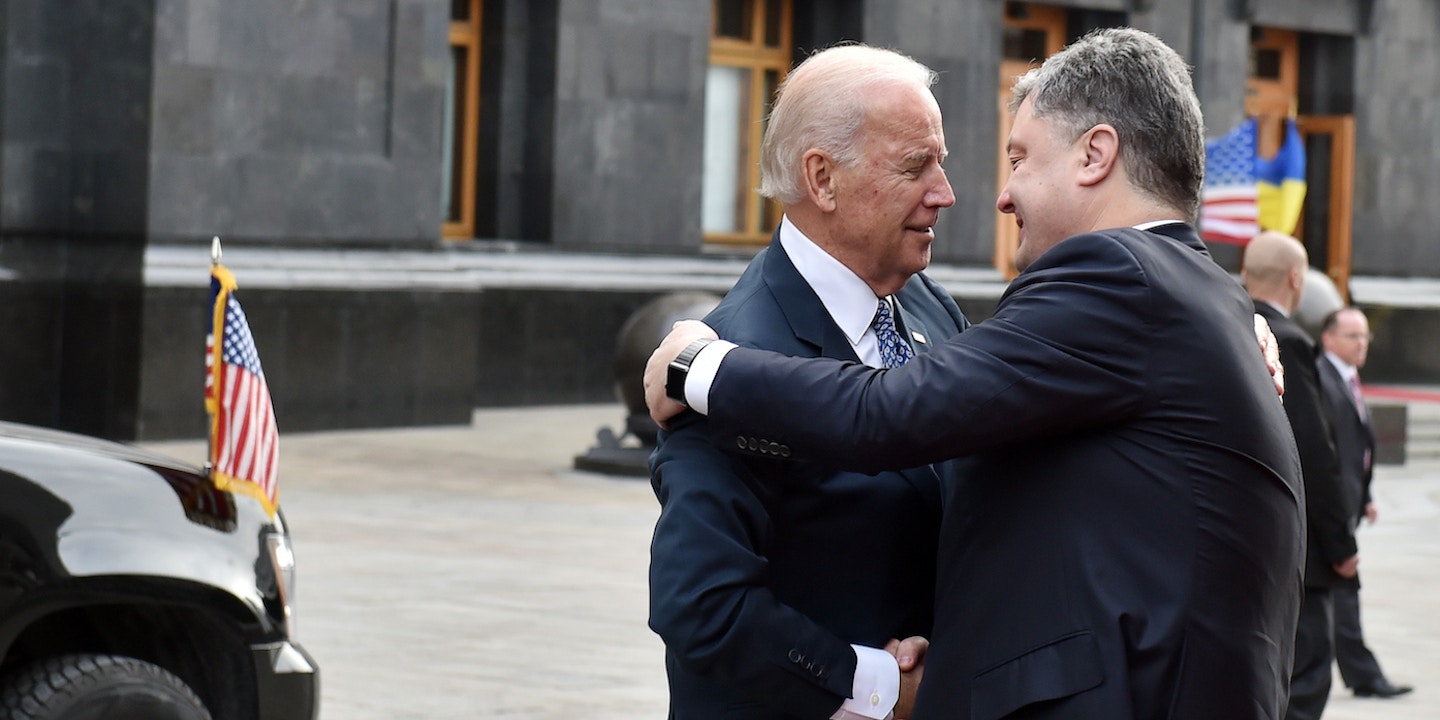 From Russiagate to Ukrainegate

With the “Russiagate” hoax proving to be the “most fraudulent political scandal in American history,” as Princeton Professor Stephen Cohen puts it, now we have emerging an alternative – “Ukrainegate”.

President Donald Trump is being accused of abusing his White House office to put pressure on Ukrainian counterpart Volodymyr Zelensky to dig into alleged corrupt dealings by Joe Biden, the top Democratic candidate for the forthcoming presidential elections in 2020.

To make matters worse for Trump, he is also accused of threatening to withhold $250 million of military aid as a way to pressure the Kiev authorities to investigate Biden’s past relations with Ukraine, when he was serving as Vice President in the Obama administration. That could amount to extortion by Trump, if proven.

Democratic political opponents and the anti-Trump liberal media are renewing demands for his impeachment. They are adamant that he has now crossed a clear red line of criminality by seeking a foreign power to interfere in US elections by damaging a presidential rival.

For his part, Trump denies his conversations with the Ukrainian president were improper. He said he phoned Zelensky back in July to mainly congratulate him on his recent election. Trump does however admit that he mentioned Biden’s name to Zelensky in the context of Ukraine’s notorious culture of business corruption. The American leader maintains that Joe Biden should be investigated for possible conflict of interest and abusing the office of vice president back in 2016 in order to enhance the business affairs of his son, Hunter.

Trump’s phone call to Ukraine hit the news last week when a US intelligence officer turned whistleblower to allege that the president was overheard in a conversation inappropriately making “a promise to a foreign leader”. The identity of the foreign leader was not disclosed. But immediately, the anti-Trump US media began speculating that it was Russian President Vladimir Putin. The keenness to point fingers at Putin showed that the Russiagate fever is still virulent in the US political establishment, even though the long-running narrative alleging Russian interference or collusion collapsed earlier this year when the two-year Robert Mueller “Russia investigation” floundered into oblivion for lack of evidence.

Turns out now that Trump’s telephone liaison was not with Putin, but rather Ukraine’s Zelensky. And the anti-Trump politicos and media are getting all fired up with “Ukrainegate” – as a replacement for the non-entity Russiagate.

Trouble is that this alternative conspiracy could backfire badly for Trump’s enemies. Because, despite the obsession with trying to impeach Trump, the renewed focus on Ukraine raises legitimate and serious questions about the past dealings of Joe Biden.

In March 2014, Biden’s son Hunter was slung out of the Navy Reserve for his cocaine habit. Then a month later, the younger Biden ends up on the executive board of Ukrainian natural gas firm Burisma Holdings. This was all only weeks after the Obama administration and European allies had backed an illegal coup in Kiev against the elected Ukrainian President Viktor Yanukovych.

Vice President Joe Biden was the White House’s point man to Ukraine, supporting the new regime in Kiev by organizing financial and military aid. Biden even boasted how he personally warned Yanukovych that the game was up and that he better step down during the tumultuous CIA-backed street violence in Kiev during February 2014. “He was a dollar short and a day late,” quipped Biden about the ill-fated president.

The appointment of Biden’s washed-up son to a plum job in Ukraine should have merited intense US media scrutiny and investigation. But it didn’t. One can only imagine their reaction if, say, it had been Trump and one of his sons involved.

Moreover, in 2016, when Ukraine’s Prosecutor General Viktor Shokin was conducting a probe into allegations of corruption and sleaze at the gas company Burisma, among other businesses, it was Vice President Joe Biden who intervened in May 2016 to call for the state lawyer to be sacked. Biden threatened to withhold a $1 billion financial loan from Washington if the prosecutor was not axed. He duly was in short order and the probe into Burisma was dropped.

Potentially, Joe Biden, the current top Democratic candidate for the 2020 presidency, could see his chances unraveling if “Ukrainegate” is pushed further. The dilemma for his supporters among the political establishment is that the more they try to beat up on Trump over his alleged horse-trading with Ukraine, the more the heat can be turned by him on Biden over allegations of graft and abuse of office to further his family’s business interests.

Senator Lindsey Graham, who sits on the Senate Judiciary Committee, is this week calling for an investigation into Biden’s conduct in Ukraine.

“Joe Biden said everybody’s looked at this and found nothing. Who is everybody? Nobody has looked at the Ukraine and the Bidens,” Mr. Graham told Fox News.

“There is enough smoke here,” Graham added. “Was there a relationship between the vice president’s family and the Ukraine business world that was inappropriate? I don’t know. Somebody other than me needs to look at it and I don’t trust the media to get to the bottom of it.”

Ukrainegate could turn out to be even far more damaging to the Democrats. Because there is evidence that it was the US-backed Kiev regime which helped seed political dirt on Paul Manafort, the former Trump campaign manager. Manafort is facing jail time for fraud and tax offenses unearthed by the Mueller probe. Mueller did not find any link between Manafort and a “Kremlin influence campaign”, as was speculated. However, because Manafort did work previously as a political manager for the ousted Ukrainian President Yanukovcyh, he was seen as a liability for Trump. Was Russiagate always Ukrainegate all along?

Apart from Biden’s potential personal conflict of interests in Ukraine, the country may turn out to be the key to where the whole Russiagate fiasco was first dreamt up by Democrats, Kiev regime operatives and US intelligence enemies of Trump.

Ukrainegate has a lot more political skeletons to tumble from the wardrobe. Those skeletons may bury Democrats and their liberal media-intelligence backers, rather than Trump.

Loading...
"Not by might, nor by power, but by my spirit, saith the Lord of hosts." Zechariah 4:6
BEFORE IT'S NEWS ON TELEGRAM
GET THE TELEGRAM APP - https://telegram.org/ JOIN OUR CHANNEL - https://t.me/BeforeitsNews
Read it..
BEFORE IT'S NEWS
SIGN UP FOR OUR NEWSLETTER
Today's Top Stories
"Everyone Must Know This Before it is Deleted"
X22 Report The Hunt Is On, [CF] Comes Into Focus, Crimes Against Humanity - Episode 2285b
Donald’s Greatest Show On Earth! Betrayal and Deception. The Nightmare Is Soon To Be Unleashed. Where Is This Coming Messiah Mentioned In Bible Prophecy? Awesome Videos
Nobody Cares That They Are Performing Satanic Rituals Right in Front of Us
RichiefromBoston: We Are Under Attack, Act Accordingly!
Steve Quayle Unplugged! War Looms, Fearful Will Run, We Will Fight Via The Hagmann Report
Silk Masks Offers More Protection than Cotton or Synthetics for COVID-19 Prevention
Solving the Strange, Unusually Geometric Pattern of Storms on Jupiter
The Cabal Is In Full Panic Mode As Their Events Are Backfiring!!! What's Coming Next Will Be The Final Blow!!! (Must Watch)
Ivanka Trump & AG Bill Barr Team up, Make Huge Announcement! - Great Video
Loading...
Featured
DOJ Uncovers Trump Votes Got Thrown Away, Votes Found in Ditch, Media Says Trump Is Planning A Coup!! - Must Video
Epic Economist: Unprecedented Monetary Overhaul! Fed Preparing to Deposit Digital Dollars Directly to Each American! - Must Video
Biden & Sons: An All-American Crime Family & International Shakedown Syndicate
Deborah Tavares: Black Out Coming! Power Grid Down! September 2020 via Israeli News Live!
Charlie Kirk: Know the Truth About Breonna Taylor! - Must Video
Survival of Our Republic! Can We Save it? A Somber Analysis! - Must Hagmann Report Video
Robert David Steele: Dr. David Martin Speaks on the Fake Virus & Staged Pandemic! - Must See Video
Dollar Crash Warning, Economy on Life Support, Gas Car Ban in Cali, Unemployment Still Poor! - Must Video
Prepping Things to Never Throw Away: Trash to Treasure - Use What You Have, Repurpose DIY Gear (Video)
Deborah Tavares: Worldwide Attack! This Is All Part of the Great Reset
Loading...
Top Global
Breaking! Israel Imposes Lockdown! Is America Next? via AMTV
Nobody Cares That They Are Performing Satanic Rituals Right in Front of Us
Rothschild Rulers
The Seeds Have Been Planted For The Next American Civil War. I Don’t Think Anything Stops It Now.
SGTreport: General Wesley Clark "We're Going to Take-Out 7 Countries in 5 Years"
Wanna bet that Aus’ is a testing ground for what’s coming soon?
WATCH: President Trump Slams China at United Nations: ‘China Must Be Held Accountable’
After Trump Shut Him Up, Vengeful Fauci Made NEW Sinister Plans & He’ll Stop At Nothing To Get It!
RichiefromBoston: A Major Part of Their Plan Was Right In Front Of Our Eyes
Breaking! China Warns What Comes Next In Taiwan!
Loading...
Top Alternative
Edgar Cayce "Fallen Angels" Spoken of in the Bible Are Here to Keep an Eye on Us
Meteoroid Bouncing Back into Space?
It's Thursday Night Live Protest/Riot Coverage
Nobody Cares That They Are Performing Satanic Rituals Right in Front of Us
Rothschild Rulers
The Mandela Effect: The Man From the 'Country' That Does Not Exist! Multiverses
Edgar Cayce: Strange Metals, Minerals and Stones... Their Magical Properties Were Noted by Cayce
The Great Conservative Migration & What it Means for the Future
Ghislaine Maxwell's Friends Predict She Will 'Sell Out' Bill Clinton as New Revelations Emerge!! - Must Video
Soros-Funded Coalition Plans to Unleash Election Day Chaos That Could Far Surpass Floyd Protests!