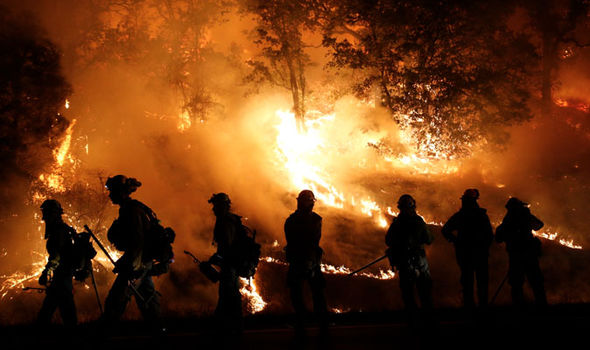 Shares of California’s largest, and bankrupt, utility PG&E, plunged 26% to a new all time low on Friday… 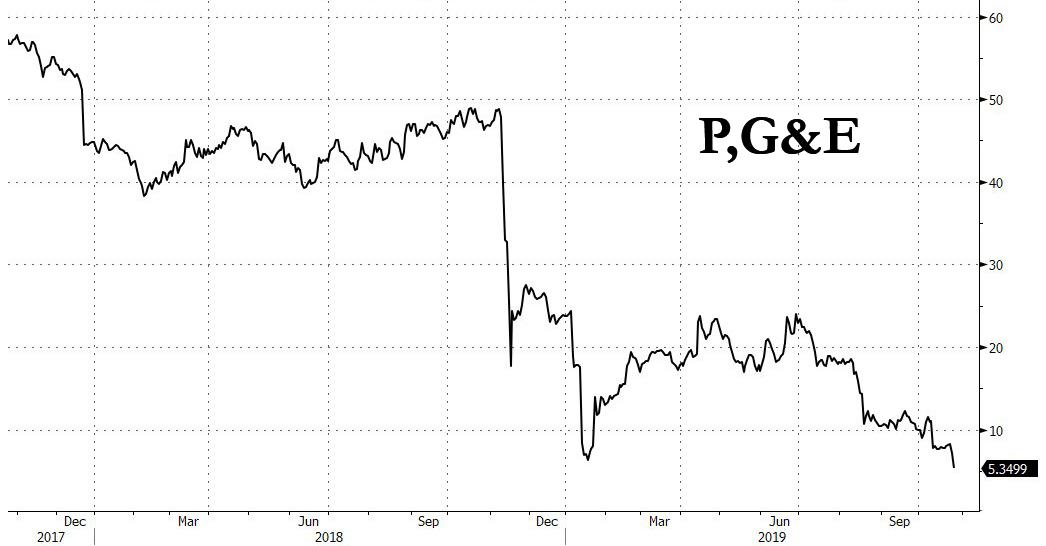 … amid speculation that the company – which filed for bankruptcy at the start of the year as it was faced with soaring legal liabilities over its involvement in the most destructive California fire in history – would be held liable for the Kincade Fire which is burning in northern California, and has already affected 16,000 acres. 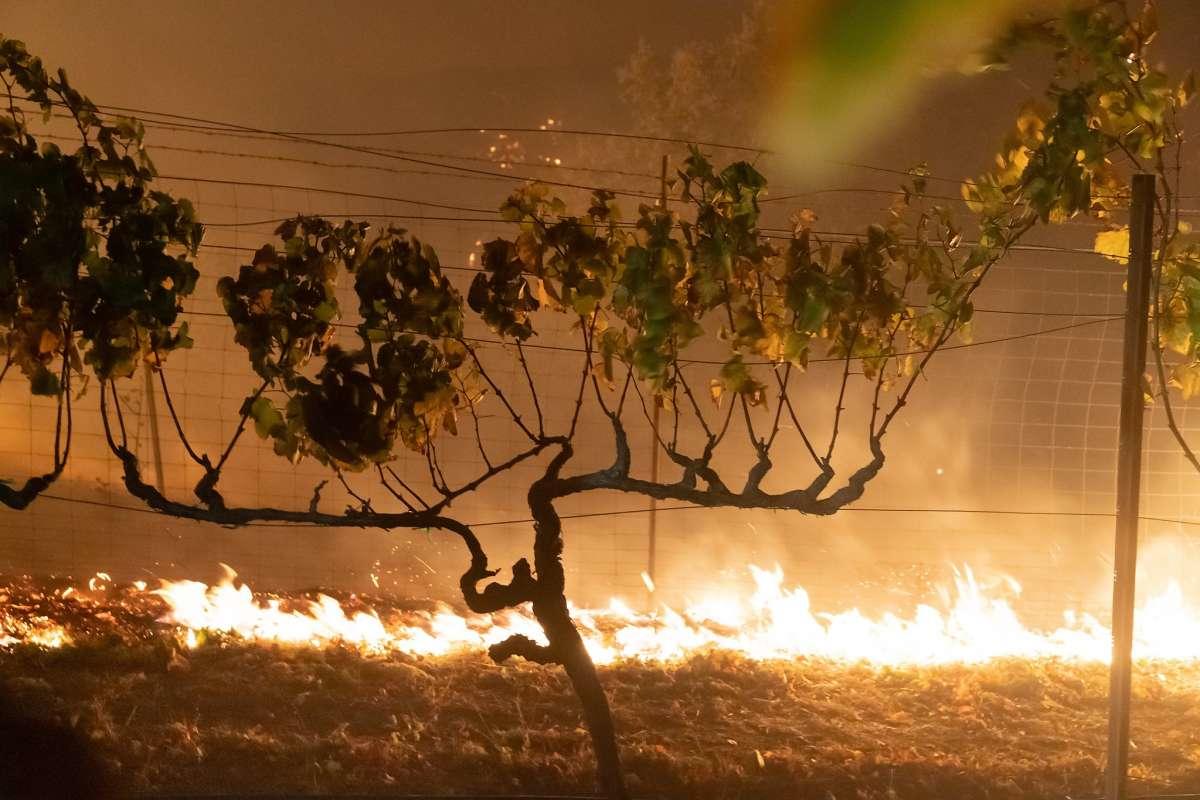 According to a note by Citi’s Praful Mehta, while it is still unclear if this week’s fire in Kincade was indeed caused by PG&E equipment, the prospect raises the risk of wiping out PG&E’s equity value, which would also undermine the recovery plan favored by PG&E and its shareholders, and make it more likely that a rival plan from bondholders will win approval, one which leaves the current equity a donut.

The Citi report comes one day after PG&E admitted that its transmission lines in the area of Kincade fire were not de-energized because forecast weather conditions, particularly wind speeds, did not trigger the Public Safety Power Shutoff protocol. In a statement, the company added that the wind speeds of concern for transmission lines are higher than those for distribution, adding that the transmission tower was inspected earlier this year as part of PG&E’s Wildfire Safety Inspection Program. Of course, none of that will matter if California finds that the Kincade fire was indeed the company’s fault.

Mehta echoed his bearish sentiment from earlier this month, when the analyst set a Street-low price target at $5 on PCG shares (they are trading at $5.30 after today’s drop), predicting there was a 75% probability the California power company’s stock would fall to zero. On Friday, he repeated his call, saying “shareholders are worried — and should be.”

Separately, Evercore ISI analyst Greg Gordon said that if the fire is linked to PG&E during the bankruptcy process, it would be whether the company met California Public Utilities Commission’s standards on whether the disaster was handled prudently. If the company were found to have acted imprudently in a $10 billion fire and were able to negotiate claims down to $6 billion, PG&E may still be on the hook for $4.3 billion, Gordon said.

“PCG has modest insurance and can access the state wildfire insurance fund (with limits), but this is a setback,” Gordon wrote. “A big fire could increase overall liabilities for shareholders and threaten the viability of their equity backstop.”

As Bloomberg notes, backers of the PG&E plan could terminate their financial commitment of over $14 billion if a destructive wildfire is linked to PG&E and its service territory before 2020. And with wildfires continuing to spread, participants wonder whether PG&E will be able to reach a bankruptcy settlement. Another bad fire season could push them into bankruptcy again.

Bloomberg Intelligence analyst Negisa Balluku said that a fire caused by PG&E equipment could also affect PG&E’s ability to abide by California’s wildfire liability law. Such a fire would “likely lead to claims with precedence over those from the 2017-18 California wildfires as well as over unsecured debt,” she said.

Meanwhile, in a double whammy for California, even as a part of the state is burning again, the worst may be yet to come for California residents, because whereas the bankrupt utility said it had restored power to about 165,000 customers in portions of 18 counties, or about 93% of those affected, the giant utility is preparing to cut the lights again across much of its territory this weekend in anticipation of the strongest wind storm in years, potentially leaving 1.2 million customers without power, which reminds us of something we joked a few days ago: “Every time the wind blows California will become Venezuela”.

Every time the wind blows California will become Venezuela

114 people are talking about this

It turns out it wasn’t a joke.

Loading...
"Not by might, nor by power, but by my spirit, saith the Lord of hosts." Zechariah 4:6
Read it..
BEFORE IT'S NEWS
SIGN UP FOR OUR NEWSLETTER
Today's Top Stories
500 Million People Under Lockdown! Pleiadians Do Not Detect "Core-o-na Virus"... Unspeakable Horror Unfolding in China? Bioweapon Has 100% Infection Rate? Extermination Furnace? Personal Valuables of Infected Used to Pay for Facilities?! Facilities Going up All Over China? Death Smog Over Wuhan?
This Is What China Is Hiding From The World! - Must See Video!
X22Report: MSM Getting Ahead Of Stories, Panic, it’s Going to Be a Very Hot [Spring/Summer]! - Great Video!
Coronavirus Unmasked: Disturbing Video Reveals China in Panic in Covid-19 Pandemic
World War Deep State III [WWDS III] Bio-Weapon Report, Chinese Intelligence Agent Confirms: Capt. Dave Bertrand, Ret. +Video
Alert: They Are Weaponizing Gold for Dollar Collapse 2020! - Must See Economic Collapse Video!
Sandy Hook : Rebecca Carnes Interview With Scott Bennett
The Deepwater Horizon Oil Spill Was a Cover-Up, Not a Cleanup
How the Coronavirus (COVID-19) Has Been Manufactured Since 1981 to Implement Medical Martial Law - Population Control
Coronavirus: Is the Puzzling Silence From Officials the Calm Before the Storm? - Great Chris Martenson Video
Loading...
Featured
Who Will be Running the Camps? - Great Dave Hodges Video
Peter Schiff Warns of an Epic Stock Market Crash & Economic Collapse Worse Than 2008! - Great Video
Q News - Is The Game Over For The Corrupt Cabal? - Great Video!
Here’s Why Obama Era Cronies Are Viciously Taking Aim At Barr: He Has Something They Don’t Want Out!
Covid-19 Pandemic Update: What if it Can't Be Contained? -- Spiro Skouras via SGTreport
COVID-19 Official Name of Coronavirus Means: Angel of the Bottomless Pit - Sheep - Slaughter (Video)
Dr. Paul Cottrell on Hagmann (2/17/2020): COVID 19 — Slow Rollout of a New 9/11 & Potential Bio-Patriot Act
Coronavirus Unmasked: Disturbing Video Reveals China in Panic in Covid-19 Pandemic
Stay Healthy with This Effective Protection and Beat Viruses (Videos)
ZetaTalk Newsletter as of February 23, 2020