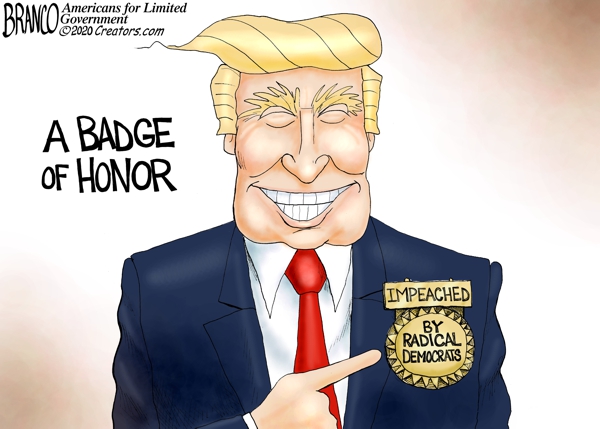 With House Democrats largely voting along party lines to impeach President Trump, there is almost a sense of righteous justification emanating from politicians, media outlets, and voters who have long sought to topple this supposed usurper. Yet for all the pomp and circumstance granted by the Fourth Estate circus, Democrats seem to be forgetting one important point: Voters are not goldfish.

Notorious for having a memory span of only 12 seconds, goldfish easily move on from one event to another and fail to link the present to the past. American voters, on the other hand, never let things go. They remember and apply what they have discovered in the past to the present day. This does not bode well for Democrats hoping to win the White House in 2020.

You might imagine that today would be an occasion of celebration among the Swamp elites; they have achieved a goal more than three years in the making. Yet despite fanfare from the left-leaning media, Democrats themselves are not as jubilant as one would expect.

Immediately after the House voted to impeach the president, Representative Nancy Pelosi (D-CA) – the architect or the patsy depending on your point of view – was asked about the next steps. She refused to say when – or even if – the articles would be sent across to the upper chamber. Could this be because any political capital gained from last night’s events would be squandered if the Senate dismissed the charges or acquitted Trump in short order?

Democrat strategist Chris Kofinis was quick to point out that Trump could still win in 2020, and stressed that:

“… presuming otherwise is a recipe for repeating the mistakes of 2016. This isn’t a national election. He is going to lose the popular vote by 2 to 3 million votes, but the battlegrounds are still competitive and he won the Electoral College.”

Never one to let a good crisis go to waste, Senator Lindsey Graham (R-SC) wrote the words that have been keeping Democrats awake at night. He foreshadowed next year’s election in what may prove to be a portentous tweet:

“Contrary to what @SpeakerPelosi said today — that President @realDonaldTrump gave Democrats no choice but to impeach  — THE SQUAD and liberal mob gave Pelosi  NO CHOICE. What does it mean?  President Trump is more likely to be re-elected and the House is in play for 2020!”

Is this the event for which Republicans have been keeping their powder dry? As Liberty Nation’s Tim Donner wrote last month:

“Trump and his allies have been forced to absorb relentless, scurrilous attacks and spectacular, unsubstantiated allegations as long as the president has occupied the Oval Office, and a prospective Senate trial will provide them the perfect platform to seek their well-earned revenge. Just imagine the witnesses they could call, and their chance to explore substantiated narratives left unexplored by the left’s handmaidens in the media.”

Playing a waiting game to see when the most politically opportune moment arises is always dangerous. Democrats’ refusal to go ahead and send the whole impeachment show to the Senate will not only alienate voters and pundits who have spent three years invested in this cause, but it also allows Republicans to cast a disturbing narrative.

Josh Holmes, a GOP strategist and outside adviser to Sen. Mitch McConnell (R-KY), tweeted, “Folks, this might be the greatest compliment McConnell has ever received. They are seriously entertaining holding a grenade with the pin pulled rather than facing what happens when they send it over McConnell’s wall.”

The primed grenade imagery is certainly powerful and may end up being a more than fitting analogy of the Democrats’ madcap efforts to win the White House.

Even Hillary Clinton – failed presidential candidate and serial doomsayer – reflected upon the reality of the situation in a podcast interview with former Australian Prime Minister Julia Gillard, saying:

“I think that it’s going to be a very tough election, as they seem to be these days, probably closer than one would like or expect. In part, because we are so divided … I mean, we are really a divided nation, and our partisanship stands for many other things. It stands for acceptance or rejection of all kinds of cultural changes. It stands for divides between urban and rural, between fast-growing, knowledge-based economies and stagnant, agriculture and manufacturing-based economies.”

Clinton may well be aware that the nation is divided, but these were the arguments made even before the impeachment began. The reality is that nothing has changed. President Trump has overseen a booming economy and record low unemployment; this is what voters will remember when they head to the polls next November.

America’s voters will remember slights, falsehoods, and political shenanigans. They are not goldfish with 12-second  memory spans. They are elephants who never forget.

Loading...
"Not by might, nor by power, but by my spirit, saith the Lord of hosts." Zechariah 4:6
Read it..
BEFORE IT'S NEWS
SIGN UP FOR OUR NEWSLETTER
Today's Top Stories
Q News - Rude Awakening! Are We Seeing The Plan Come Together? - Great Video!
Complete Virginia Live Stream Coverage Here!
LA Marzulli: Red Haired Giant in Afghanistan Faces Soldiers - The Classics
Breaking: Nancy Pelosi Gets Embarrassed on National Television! - Great Video
Live Report From Ground Zero In Richmond, Virginia! Great Dave Hodges Video!
Trump Gives Michael Bloomberg One Hilarious Nickname
Virginia Live Feeds
Pole Shift: Hollow Earth Theory - Something Is Covered Up Beyond the Poles
12 Gauge ‘No FFL’ Pistol – Ship To Your Door -Full Review – Diablo – American Gun Craft
Young People Share the Side-Effects and Consequences of Taking ADHD Meds (Videos)
Loading...
Featured
The Mainstream Media Admits We Are In “An Auto Recession” – And It Just Continues To Get Worse
I Will Jail Jerry Nadler! President Trump Rains Insults on Jerry Nadler & Nancy Pelosi! - Great Video
I Pet Goat 2: Death of Presidents Solved
Anonymous: Shocking! This Will Change All That You Know! (2020)
Retail Apocalypse Getting Worse In 2020 Despite Amazon Bubble Ready to Burst! - Great Video
Richmond Roundup
MSM Does Not Want You to Hear What This Black Man Said at the Virginia Rally!
“Come And Take It”: Massive Virginia Gun Rights Rally Kicks Off In Richmond
House Manager Declares President Guilty Of... "Attempted Bribery"
Martin Luther King Jr Was Part of the Great American Awakening! I Have a Dream! Awesome Video!