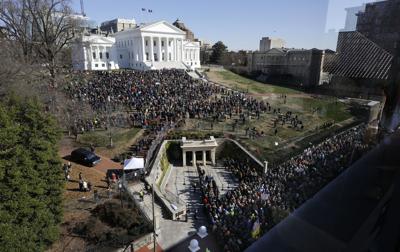 I do not really care what the pundits are saying about Lobby Day in Richmond. I also am not going to say “I told you so” to those individuals who warned people not to attend. Does anyone really think that Matt Bracken and others had anything but the best of intentions for the people?

Only time will time if today’s Lobby Day will have an impact on the Democrat controlled government in Virginia. At least for today, Virginians showed that they will not go quietly into the dark night of tyranny.

Loading...
"Not by might, nor by power, but by my spirit, saith the Lord of hosts." Zechariah 4:6
Read it..
BEFORE IT'S NEWS
SIGN UP FOR OUR NEWSLETTER
Today's Top Stories
Sarah Westall: Whistleblower Brutally Beaten, Coronavirus Explained From Chinese Healer, Hired Mercenaries
Q: Hollywood Is Burning! Is Barron Trump Q? Barry's Belated Impeachment? Best Is Yet 2 Come! - Great Video
Billy Meier Predictions and Prophecies Are Now Being Proved Correct
Whistleblower found dead
Worldwide Virus Alert! Millions Infected & Spreading! - Must See Video!
The Billions Are Gone! Disappeared!
Mark Taylor: Q! Gloves Are Off, Fight Is On
Plague Upon Us? 3 Must Do's to to Combat Coronavirus
David Abel Exposed As Crisis Acting Freemason On Board Diamond Princess Cruise Ship
The Donald: The Serpent Seed From the Royal Bloodline/Tribe of Dan (Have You Been Snared by Trump?)
Loading...
Featured
Greg Hunter: Covid19 Real Beast Causing Dangerous Pandemic! China Virus Is the Real Deal, Get Ready! – Chris Martenson Must Video
The Government Has Lost Control of COVID-19
31 Updated Reasons why we should close our borders to fight the spread of the deadly Wuhan Bio-Weapon Coronavirus Virus Pandemic by Kyle Kenley Kopitke, 22 February, 2020
Plague Upon Us? 3 Must Do's to to Combat Coronavirus
Colorado Cop With WWJD Bracelet Murders an Unarmed Man
Bombshell Secrets Revealed! Behind the Veil of Mass Deception: Just How Fake Is the [Fake News]?! Great Video!
"Turn Off Your Camera and Step Out of the Car" New York State Extortion Stop
Did a Senior Chinese Military Intelligence Officer Call the Coronavirus a Hoax or Did Dean Koontz Write A 'Novel' Virus Sequel?
The 5G Trojan Horse: What You’re Not Being Told
‘Whom the Gods Would Destroy – They First Make Mad’ – COVID-19 Hysteria Goes Global