Small businesses are the backbone of the economy. The people who run them tend to be closer to the workers than in big companies, and really know what’s going on, what affects workers and their paychecks. You can bet they are now on the hit-list of Modern Socialists 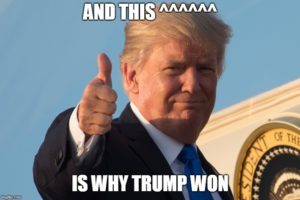 A survey conducted by the Job Creators Network (JCN) showed that small business owners — employers with less than 500 employees — found that 79.4 percent want free market-based healthcare as opposed to Medicare for All or a Public Option.

“The results speak for themselves: small business owners are thriving and attribute much of their continued success to the pro-growth policies pushed by the current administration,” said Alfredo Ortiz, President and CEO of the Job Creators Network, in a press release.

When asked what the top three areas of concern are for them, 56.7 percent of the group of small business owners said high taxes, another 39.8 percent said healthcare, and 37.6 said the Coronavirus concerns them.

They know that the Democratic Party plans to jack up taxes will hurt them, and, will hurt their employees, because that would mean getting rid of employees, capping hours worked, reduced pay and benefits, reducing the number of part time employers. Of course, Democrats like Biden and Comrade Sanders neither know nor care, because they really have never worked outside of politics during their lives. Trump has run businesses. Sometimes they succeed and sometimes not. But, he’s been out there. He’s worked with big wigs and small entrepreneurs. He knows what makes business work, and what the government’s role should be. Bernie and Biden, along with the rest of the Dems, just want the federal government to control everything and everyone.


Source: https://www.thepiratescove.us/2020/03/10/small-business-owners-support-trump-over-sanders-biden-bigly/
Before It’s News® is a community of individuals who report on what’s going on around them, from all around the world.