Summary: Eco-elites and ultra-wealthy foundations are using Hollywood scare tactics to ban the products you cook and clean and protect your home with. Dark Waters is just Hollywood’s latest effort to scare moviegoers into voting against their own interests. The film details how one trial lawyer, Robert Billott, faced down chemical giants DuPont and Chemours for “pollut[ing] the environment” with what the film calls “forever chemicals”—a decidedly unscientific term. The whole scheme is arranged to keep Americans in the dark about the funding sources and fool them into supporting the very laws and regulations that would leave them poorer and less safe—all in the name of consumer “safety.”

Dark Waters was produced by Participant (until recently known as Participant Media), a company known for producing movies with a political message, including Al Gore’s “climageddon” documentaries. Participant is a part of the Skoll Network, a web of left-wing mega-funders founded and run by Canadian philanthropist and ex-eBay president Jeff Skoll.

EWG lobbies against modern agricultural practices and technology and specializes in class-action lawsuits and promoting harrowing conspiracy theories, once going so far as to entertain the CDC-debunked hypothesis that vaccines cause autism. EWG led the charge a few years ago to force food producers to label foods containing genetically modified ingredients (the GMO scare). Its reports on pesticides and other chemicals have regularly been discredited by scientific and academic journals.

EWG has received over $400,000 from Passport and Forsythia. It’s also heavily funded by the left-wing Hewlett, Marisla, and Joyce Foundations (the latter of which once included then-Sen. Barack Obama on its board). The group was incubated by the Tides Foundation, which specializes in creating new activist and litigation groups; Tides founder Drummond Pike was even the former chair of EWG’s board and played a personal role in its formation.

In fact, most of groups behind Dark Waters and Fight Forever Chemicals share one thing in common: funding from the Forsythia and Passport Foundations.

See the complete list of grants from Forsythia and Passport to eco-groups here.

Safer States, for example, is one of the leading trumpets trying to ban PFAS. The group has received $140,000 in grants from Passport and Forsythia, but it isn’t even a real nonprofit; “Safer States” is essentially a marketing campaign for Toxic-Free Future, until recently known as the Washington Toxics Coalition.

Toxic-Free Future in turn is heavily funded by two more left-wing foundations you’ve probably never heard of: the John Merck Fund and Marisla Foundation, which between them have granted it over $5 million. (CRC has tracked Merck and Marisla’s anti-DuPont, anti-consumer funding since at least 2005.)

The Green Science Policy Institute, another Dark Waters partner, is a Berkeley, California-based think tank that publishes scientific papers critical of PFAS and other “forever chemicals.” It’s headed by Arlene Blum, a chemistry research associate at the University of California, Berkeley.

The institute is the brains of the Fight Forever Chemicals campaign, lending intellectual credibility to Ruffalo & Co.’s activist crusade. In 2017, two Institute researchers (including Blum) authored a study on the public health effects of PFAS in the journal Environmental Health arguing that the “possible health impacts of exposure to highly fluorinated chemicals [i.e. PFAS] are of great concern to communities whose water has been impacted” and calling for “regulatory decision making . . . to contribute to reducing future exposures.”

The study’s funders were the Passport, Forsythia, and Tides Foundations.

In fact, Passport and Forsythia together have granted the Green Science Policy Institute $150,000 since 2017. The Institute is also funded with hundreds of thousands dollars by the Tides and Stephen Silberstein Foundations (both based in California), which have made grants supporting the Institute’s research into “per- and polyfluoroalkyl substances”—better known as PFAS.

Dark Waters isn’t the first anti-PFAS documentary that Forsythia and Passport have funded. Forsythia’s Alison Carlson was co-executive producer of The Devil We Know (archived here), another documentary about PFAS litigation released in 2018..

The film’s list of partners is almost the same list from Dark Waters and the Fight Forever Chemicals campaign: the NRDC, Environmental Working Group, Toxic-Free Future (the sponsor of Safer States), and the Forsythia Foundation. Another film partner, Kitchen Table Campaigns, is a major anti-chemical lobby that goes by the name Safer Chemicals, Healthy Families. It has received $135,000 from Passport and Forsythia. 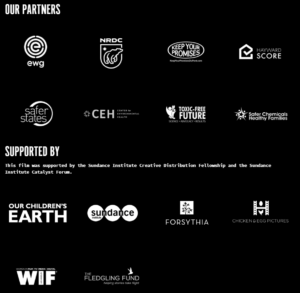 It’s worth pointing out that the Forsythia-Passport axis isn’t the only big funder on the anti-chemical Left. Support for The Devil We Know also came from Chicken & Egg Pictures, a far-left “social justice” nonprofit studio which produced the 2011 documentary Semper Fi: Always Faithful, about chemicals leaked into the water supply at the Marine Corps base at Camp Lejeune, North Carolina.

Chicken & Egg Pictures began as a project of the Tides Center, the arm of the Tides Foundation dedicated to incubating new left-wing groups. It produces only films by directors who are “self-identifying women (cis or trans), gender nonconforming individuals, or a female/male co-directing partnership.” Unsurprisingly, Chicken & Egg Pictures got $10,000 from the Tides Center to film Semper Fi, funds that ultimately originated with the Passport Foundation.

In the next installment of “Eco-Hysteria in the Theater,” look closer at Forsythia Foundation.


Source: https://capitalresearch.org/article/eco-hysteria-in-the-theater-part-3/
Before It’s News® is a community of individuals who report on what’s going on around them, from all around the world.

Loading...
"Not by might, nor by power, but by my spirit, saith the Lord of hosts." Zechariah 4:6
BEFORE IT'S NEWS ON TELEGRAM
GET THE TELEGRAM APP - https://telegram.org/ JOIN OUR CHANNEL - https://t.me/BeforeitsNews
Read it..
BEFORE IT'S NEWS
SIGN UP FOR OUR NEWSLETTER
Today's Top Stories
Fed Executions to Resume Next Week [Deep State Panic]!! - Must Video
Ellen Degeneres Exposed? Very Bad News Now
Robert David Steele Unleashed! Ghislaine Maxwell, Human Trafficking and Deep State
Patriots Are Standing Up! Watch What Happens! Amazing! - Must See Video
Bombshell! They Will Announce This Soon!! - A Must Video
New Method Estimates Risks of Hormone-Disrupting Substances in Drinking Water
Enormous 'Superflare' on Nearby Star Discovered
The Collective Power of The Solar System’s Dark, Icy Bodies
Black Pilled: The Party Is Over
The Next Card Will Be Flooding of Biblical Proportions, Watch This via Leak Project
Loading...
Featured
Alert Biblical Wave Of Evictions Make Tens Of Million Homeless All Over America
Markets: Expect The Hideousness To Get Much Worse! - Great Gregory Mannarino Video
Linda Moulton Howe: Whistleblower Comes Forward & Discloses True E.T. Secrets
X22Report: Do You Feel The Heat Of Summer, True Evil Is About To Be Revealed To The World! - A Must Video!
X22Report: Businesses Are About To Take Off, Watch What Happens When Kids Go Back To School! - Great Video
Dark Outpost: Epstein Video Evidence Leaked - Child Trafficking Cabal
California Now Less Than 90 Days Away From Financial Collapse! Anarchy to Follow! +Video
Bombshell! They Will Announce This Soon!! - A Must Video
Dr. Richard Bartlett’s COVID ‘Silver Bullet' Budesonide Empties Hospital ICU! - Must See Video
Black Cloud Descending Upon America
Loading...
Top Global
Alert Biblical Wave Of Evictions Make Tens Of Million Homeless All Over America
Head of the Snake - Wexner, Maxwell’s, Mossad & Mega Group Exposed
Sweden Was Right After All, Rest of the World Was Punk’d
Illuminati "Will Leave No Aspect of Global Society Untouched."
They Want You Chipped and Up to Date on Your Shots Just Like Cattle..Timeline From 9-11 to Covid19
Benjamin Fulford: How The USA Became a Babylonian Slave State
Here it Comes: Bill Gates and His GAVI Vaccine Alliance Launching AI-Powered ‘Trust Stamp’ Combining a Vaccine and Digital Biometric ID in West Africa
FBI data: Jews were 2.7X more likely than blacks, 2.2X more likely than Muslims to be hate crime victim
30 Million Polio Vaccines With Cancer Contamination for CDC – Population Control - How to Kill 15% of Population “by Bill Gates”! (video)
Culprits Behind Covid-19 Coronavirus Epidemic Reveal Their Destructive Agenda
Loading...
Top Alternative
News Intel Updates - It's Getting Bad Out There, 7-11-20
Black Pilled: The Party Is Over
10 Signs Of The End Times Tribulation Period, The Birth Pangs Are All Around Us
Prophecies, Dreams & Visions all Pointing to USA's Destruction and Judgment Coming Soon!
Head of the Snake - Wexner, Maxwell’s, Mossad & Mega Group Exposed
Is Trump The Masonic Hiram Abiff? Is Trump Supplying The Money To The Money Changers Of The Temples Or The 501C3 Churches Today? Is This Why All The Pastors Are Keeping Quiet During The Shutdown And Bowing Down To Trump? Great Videos by Enter The Stars.
WHY DO TEACHERS UNIONS HATE OUR KIDS? Latest Research Prove That School Closures are Based on Politics, Not Science
Georgia abortion heartbeat law banned by federal court
The Antichrist Is Here - John Hagee 2020
Is There Something Hiding in Giza Pyramids?... Mysterious New Discoveries Made!