In August 2010, 40 billionaires signed The Giving Pledge—promising to give away at least half of their wealth during their lifetimes. As of March 2020, a total of 120 couples, 78 single men, and 11 single women had signed on to the high-profile effort, begun by Bill and Melinda Gates and Warren Buffett.

Those signatories who join can submit a letter explaining their decision to commit to the cause that’s posted on The Giving Pledge website. One hundred eighty-seven of the 209 signers have submitted such a letter.

Three scholars who recently analyzed all of the letters found 10 distinct explanations for giving. In many cases, the donor mention more than one reason. The researchers also noticed a common, internal contradiction within the letters. If the letters are taken at their word, the contradiction reflected within them may be a healthy one.

“You cannot assume that the letters contain the true motives for making this pledge, but these missives do open a window into why these billionaires believe they should give away so much of their wealth,” according to an overview last week in The Conversation of the scholars’ working paper by one of them, University of San Diego (USD) associate professor Hans Peter Schmitz. The other two researchers are USD Ph.D. candidate Elena McCollim and Baruch College associate professor George E. Mitchell.

None of the billionaire signers “referred to a desire to become more famous, for example, or openly acknowledged any sense of guilt,” Schmitz writes. “Yet those feelings might contribute to the personal motivation these rich people have to join the Giving Pledge.”

Seventy of the letters described a drive to make a difference, the top categorization. Sixty referenced a desire to give back, the second most-cited reason. 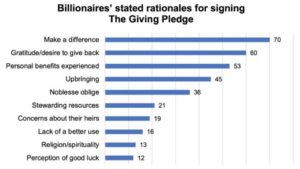 “But what sets these donors truly apart from the rest of us is what we philanthropy scholars call ‘hyperagency’—the desire to singlehandedly change the world in accordance with their ideas and dreams,” according to Schmitz.

“In other words, Giving Pledge letters harbor contradictions with their messages about both ambition and humility,” he writes. “Many of the people who embraced this campaign have seen themselves as uniquely capable of change the world. At the same time, they would like others to see them as modest, grateful and selfless.”

Neither Begrudged nor Belittled

Being human, we non-billionaires might be familiar with the same kind of tension between ambition and humility. As for those in philanthropy in particular, billionaire couple or individuals or not, we at The Giving Review regularly features articles urging more humility on their part. (We’re very proud of that, in fact.)

More humility among grantmakers is needed, we think. It would generally help personal and institutional grantors, grantees, the causes in which they both believe, and the specific projects they pursue, each in their various ways.

So ambitious Giving Pledge donors’ stated humility should probably be neither begrudged nor belittled. Unless it’s a false humility, it’s healthy. Many think it is a false humility that’s being expressed, of course—merely part of some disingenuous, public-relations performance of some sort. As one inclined toward skepticism or perhaps even cynicism, that might be right.

Some would say that ambition can shape either pride or humility, however—which, if true, gives the skeptic or cynic an “out.” Maybe consider taking it; withhold judgment on motivation, if even only for a time. The givers’ commitment is only for a lifetime, after all, which isn’t all that long.

This article first appeared in the Giving Review on June 9, 2020.