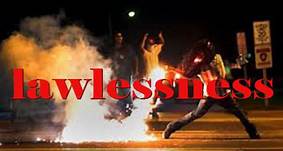 Mad Max was a movie franchise set in post-apocalyptic Australia.  The survivors, in the outback, were terrorized by a psychotic, violent bunch of motorcycle gangs.  The protagonist, a cop named Max, and his loosely formed force of police, called the Bronze, tried to stop them.  In the process, Max’s partner was burned alive and his wife and child murdered.  It is not a pleasant place or time to be alive.

Are we there yet?

Finally, police chiefs and calmer heads are attempting a discussion on race relations that doesn’t instantaneously elicit cries of “racism.”  Almost unanimously, the reactions to the police involved in the George Floyd death have been of revulsion and condemnation.  But voices are now being raised that fairly assert that the rogue actions of a few police thugs do not represent the vast numbers of honorable police officers comprising the thin blue line.  These are the men and women who daily risk their lives with courage and dignity, often for scant pay.  Some are also finally addressing the fact that Officer Derek Chauvin and George Floyd knew each other, meaning, a factor other than race might have been motive.

What other group would accept this type of stereotypical scorn.  Most blacks do not riot and loot; they respect the police and appreciate their protection.  Most immigrants, legal or otherwise, seek America as a haven and a chance for a better life; they do not drive while under the influence and they don’t rape and murder.

Regardless of revisionist historians, and the madness and mayhem we have witnessed over the past dreadful days, America was born to defy royalty and state-mandated religion.  Our forefathers, imperfect as they may have been, fought with their lives to avoid kneeling to royalty.  No bowing and bending one’s body and head before Samurai warriors, who might or might not have chopped it off.  No fearful bowing or curtseying before kings and queens.  No subservient raising of arms to a dictator who rules by personal fiat and private armed security guards, reinforced by a national police force.

What athletes, actors, educators, most press and celebrities mouthing off about this don’t get is that the rest of us don’t want to pay to attend a sporting event, or spend time watching an awards show whose participants hijack it to make a political statement or gesture.  Find another platform and do it on your own time.  Kneel all you want, but not when the audience is captive.  The orchestrated show of Democrat-elected representatives, culturally misappropriating African tribal garb and kneeling, looked like a Saturday Night Live skit.

Between the pandemic shutdowns and the mass looting and arson, the rest of us, for the past three months have had many legal rights ripped from our arms, mostly in Democrat-run cities and states.  The protests have erupted in foreign cities; friendly and enemy states tsk-tsk or mock us.  And, it was all too easy.  Are we not better than this?

The First Amendment to the Constitution of the United States provides that “Congress shall make no law respecting an establishment of religion, or prohibiting the free exercise thereof; or abridging  the freedom of speech, or the right of the people peaceably to assemble, and to petition the Government for a redress of grievances.”  In an irony of all ironies, American colleges and universities have shut down conservative free speech and any voice that objects to their culture of microaggressions and victimology.  If a conservative speaker isn’t cancelled, students with impunity shout them off stage.  Unfortunately, this thuggish behavior has spilled over like a cancer into the arts and press.   Political pundits, news editors and celebrities who oppose the extreme left are subject to job loss, electronic trolling, and public shaming.  The mass looting, arson, violence, and mayhem we have just witnessed, most of which has gone unpunished, gives lie to right to peaceable assembly, or any protection when protest is not peaceable.

The Second Amendment to the Constitution of the United States provides: “… the right of the people to keep and bear Arms, shall not be infringed.”  Countless cities and governors postponed acceptance of applications for a permit to buy a gun, banned certain sales of guns and ammunition, somehow relating their mandates as pertinent to flattening the curve of the Wuhan virus – during a time when lawful citizens felt unprotected and feared for their safety and lives.  Concomitantly, the elected officials unilaterally eliminated this right had their own armed security guards.

The Sixth Amendment to the Constitution of the United States provides that: “In all criminal prosecutions an accused shall enjoy the right to a speedy and public trial, by an impartial jury in the State and district wherein the crime shall have been committed…”  With certain court systems closed by government edict for three to six months, this right is not being abided.

The Fourteenth Amendment to the Constitution of the United States, Section 1 provides “…nor shall any State deprive any person of life, liberty, or property, without due process of the law; nor deny to any person within its jurisdiction the equal protection of the laws.”  The lawful residents in many states, during the looting, arson and physical attacks that elected officials allowed to continue without much pushback, saw their property seized and destroyed and their lives and livelihood threatened.  Are the thugs who committed the mass destruction going to be apprehended and punished?  Will the harm to their victims be compensated?  While many localities had inflicted severe business shutdowns, judicial system closures, primary election changes, and stay-at-home mandates, thousands upon thousands of rioters roamed the streets without protective gear, social distancing, or fear of recourse.  Clearly the banal #AloneTogether meme didn’t apply to them, and the laws were not evenly enforced.

Socialism is having its moment.  In Washington, the Seattle police have removed barriers in an area set up during the worst of the riots, and the affected street closures repurposed into an “autonomous zone.”  What was once the Seattle Police Department is now the Seattle People Department – with all public services including garbage removal run by the people.  In D.C., there are calls for the removal of the statues of Washington, Jefferson, and Columbus – the latter of whose statues have been beheaded and defaced in certain cities.  We have seen this movie before – usually, it doesn’t end well.

‘1.  How does the city sit solitary that was full of people! How she is become as a widow! She that was

great among the nations, and princess among the provinces, how she is become tributary.

2.  She weepeth sore in the night, and her tears are on her cheeks; she hath none to comfort her

among all her lovers; all her friends have dealt treacherously with her they are become her enemies…

Book of Lamentations – poetic laments for the destruction