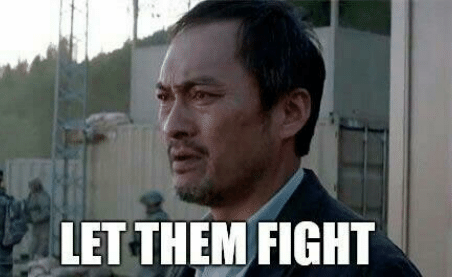 Portland Wall of Moms, a group formed in recent weeks and quickly recognized as a staple of nightly downtown protests, was accused publicly Wednesday of “anti-Blackness” by leaders of an existing, Black-led community group.

Wall of Moms, whose members said they aimed to support and protect other Black Lives Matter protesters near the fence in front of the federal courthouse, announced Friday that its white leadership had rescinded their positions to allow women of color to be in charge. New leaders announced Friday include Teressa Raiford, executive director of Don’t Shoot Portland, Demetria Hester and Danialle James.

But less than a week later, Don’t Shoot Portland took to Instagram to urge people against supporting the Wall of Moms, saying that it was no longer working with the moms group. (the post is at the link. I can never seem to get IG to post)

After leaving vulnerable Black women downtown after marching, failing to support those on the ground that put trust in them, @wallofmoms leadership also found time to make THREE registrations through Oregon’s Secretary of State. This was all done in privacy and without the knowledge of the Black leadership WOM was claiming to implement. The lies are finally clear and we are sad but ultimately not surprised that anti-Blackness showed it’s ugly face with Wall of Moms. This all came to light over the last 24 hours – We began having safety concerns within the group because Black women started saying they were not protected by WOM leadership. Too frequently would be in communication for safety, transport etc and when the time came, there would be zero response and no leadership to rely on. It’s put many on the ground in direct danger. Once these registration filings with Secretary of State came out, it became more clear – WOM was not started for BLM, but to get the feds out of PDX. None of the Black leadership WOM claimed to implement knew about this. Combined with a lack of care for and disregard of Black women, we were used to further an agenda unrelated to BLM.

Please do not support this organization anymore. We need everyone to show up against racism, but it’s even more crucial to prioritize transparency and accountability.

Well, of course it was really for the hatred of the feds, and surely other far left Progressive goals while paying lip-service to the BLM movement, just like with most of the rest of the white leftists protesting and “protesting”. These violent Antifa types, the anarchists, and others simply co-opted BLM for their own purposes.

The Wall of Moms answered a commenter’s question saying, “The founder went rogue. Many of us do not agree with her decisions. And she does not currently have access to this account.”

“The announcement of the 501c3 really hurt some of you,” she wrote. “That was never my intention. In fact, it was just the opposite. WOM will be led by a BIPOC board and BIPOC advisor committee. WOM is a group that supports BLM, not a BLM group. If that is not good enough for you, please feel free to leave this group. And if you currently volunteer your time, please feel free to leave your positions.”

BLPOC = “Black led people of color.” Isn’t it rather patronizing that these uber-white Progressives are always handing blacks things, as if blacks cannot earn it themselves? Isn’t that …… racist?