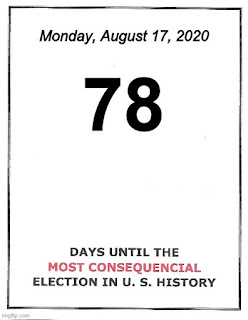 As of today, there are 78 days until the most consequential electionin American history. This is what they say about many past elections, but this is really it. For if the Democrats seize power – control of the U.S. House, the U.S. Senate and the Presidency – and doing it by hook or by crook (the justifies the means, you know) America as we know it will be forever changed. America envisioned and created by the Founding Fathers will disappear into the shadows of history.
The ungodly secular-humanists/Marxists slow march through America’s institutions over the last 100 years or so will have reached a crescendo – fulfilling Mr. Obama’s fundamental transformation of America. Never again will the demonic Democratic Party relinquish its grip on political power and control of the masses.
Envision with me what a Socialist Democratic Party, takeover, a bloodless coup, a regime change, would look like. This is one in a series of daily articles leading up to the 2020 General Election scheduled for November 3, 2020.
Sexual Orientation, Gender Identity (SOGI), It’s All Very Soggy and Confusing
A modern Merriam-Webster’s Dictionary defines sexual orientation as “(A) person’s sexual identity or self-identification as bisexual, heterosexual, homosexual, pansexual, etc. : the state of being bisexual, heterosexual, homosexual, pansexual, etc..”  However, observing nature one can only conclude that there are only two sexes, male and female. Sexual activity is designed for procreation, to propagate and continue the species.  Nature confirms biblical truth, ““But from the beginning of creation, God  MADE THEM MALE AND FEMALE.’  Stated differently, human beings are born either male or female. Human beings are heterosexual. Because we have a free will, we can choose how we behave, even if it is unnatural, abnormal, unhealthy, or immoral.
In the1828 Webster’s Dictionary and even until recent times gender was clearly defined in most of the real world as:

Our culture in 2020 has been introduced to a variety of genders. A quick look online revealed lists indicating 58, 63, and 112 genders. This is very confusing. This is pure fantasy. No it is worse, it is a lie. Let’s come back to reality. There are only two sexes, two genders.
Forces have been at work in our culture to undermine truth and science. Public schools are poisoning the minds of American children by encouraging them to question or concur with them in rejecting their biologically innate sex and gender. Medical doctors and pharmaceutical company which stand to gain by perpetuating the lie seek profit above principle and public health. So called gender reassignment therapy and/or surgery create more problems than it solves for the individual.
Institutionalizing Madness Through SOGI Laws and the Equality Act
Some cities and states have written SOGI laws that grant special rights and privileges to people based on how they act sexually.  The Family Research Council provides a excellent summary of sexual orientation and gender identity and the law in the following quote from an online article, “Sexual Orientation and Gender Identity (SOGI) Laws: A Threat to Free Markets and Freedom of Conscience and Religion:

“Sexual orientation and gender identity are unlike most other characteristics protected in civil rights laws. The federal Civil Rights Act of 1964, for example, bars discrimination based on race, color, national origin, sex, and religion. The first four of these are included largely because they are intrinsic to the individual, are received involuntarily and are immutable. (Religion, while voluntary, is explicitly protected by the First Amendment to the U.S. Constitution.) While sexual attractionsmay be involuntary, neither homosexual conduct nor transgender behavior meets any of the other criteria. Skin complexion, ethnicity, and gender cannot be changed (so-called transgender surgery is superficial; it does not change the genetic and thus defining characteristics of the persons gender).”

Ryan Anderson writes in his article, Sexual Orientation and Gender Identity Laws are Not Fairness for All,“…SOGI laws are about forcing all Americans to embrace—and live out—certain beliefs about human sexuality. They are not about protecting the freedom of people to live as LGBT, but about coercing everyone else to support, facilitate, and endorse such actions. This is one fundamental problem in equating coercive antidiscrimination laws with permissive religious freedom laws. And imposing a bad coercive policy on everyone while exempting select faith-based institutions is anything but fairness for all.”
Equality Act
The Equality Act of 2019 (H.R. 5) under Speaker of the House Nancy Pelosi’s leadership was one of the first acts she allowed to be introduced when the Democratic Party took control of the House of Representatives in January 2019.
The far leftist Human Rights Campaign (HRC) website comments, “The Equality Act would provide consistent and explicit anti-discrimination protections for LGBTQ people across key areas of life, including employment, housing, credit, education, public spaces and services, federally funded programs, and jury service.” No, it would grant special rights and privileges based on one’s sexual behavior. There are already protections for everyone on the books already.
Conclusion
Without question a priority and major plank of the communistic Democratic Party is the so-called Equality Act.  If the Democratic Party does win majorities in both Houses of Congress as well as the presidency there will be serious reverberations throughout the American society. The major victim will be religious liberty. Essentially persons with LHBT behaviors will be elevated to a special class of protection even though their sexual behavior is NOT innate like race, sex or age. There proclivities will be given preference to other people’s conscience and religious beliefs. Discrimination against people of faith will skyrocket.