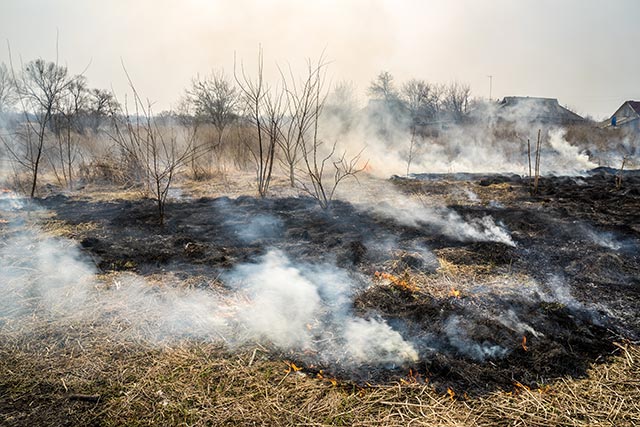 (Natural News) Experts warn that California still hasn’t reached the peak of 2020’s fire season, but some say that the wildfires are occurring due to something manmade: A directed energy weapon (DEW).

California wildfires have destroyed a record-breaking 2.2 million acres in 2020

According to the California Department of Forestry and Fire Protection (Cal Fire), 2.2 million acres have burned so far – but the wildfire season is only just beginning.

Two of the three largest fires in California’s history are still burning in the San Francisco Bay Area:

The Creek Fire, which erupted Sep. 4, Friday, is now the third-largest that is currently active, burning over 152,000 acres. It is only 20 percent contained as of Sep. 18.

The fires have killed at least eight people and destroyed more than 3,300 structures, reported Cal Fire. Most of California remains under Red Flag Warning because strong winds and low humidity continue, fanning the ongoing flames.

The previous record for acres burned was set two years ago, which included the deadliest wildfire in the state’s history, the Camp Fire, which spread through the community of Paradise and claimed 85 lives. (Related: California wildfires are causing unprecedented levels of air pollution.)

According to Cal Fire, California has experienced at least 2,650 more fires so far this year and a shocking 2,000 percent increase in the acres burned year-to-date, compared with 2019.

The National Interagency Fire Center reported that because of the drought across the West Coast, “peak” fire season may last until the middle of September. Hopefully, the end of the month will see a break in activity due to cooler temperatures. But winds could stir up more fires again by October.

In Oregon, firefighters were handling 10 large blazes around the state as of Sep. 17.

Doug Grafe, the Oregon Department of Forestry’s chief of fire protection, reported that they have taken seven others “off the map” after crews set up containment lines that have held for 72 hours or more. Those fires include the Echo Mountain Complex on the coast, the Almeda fire near Ashland and the Powerline fire in Washington County.

However, crews are still trying to establish containment lines around several other major fires, like the Beachie Creek, Riverside and Holiday Farm fires.

Grafe added fires on the east side of the state are still a priority. Crews are still trying to contain the Two Four Two fire in Klamath County and the Brattain fire in Lake County.

Is a directed energy weapon responsible for these wildfires?

While wildfires are unplanned occurrences, some say that these fires could have been caused by a man-made invention like a directed energy weapon (DEW).

Video footage from a live stream of a fire in California suggests that a DEW could have been used to cause wildfires, and the same goes for a fire in Oregon.

The video below shows a black censorship line through the beam, hinting that someone may be trying to hide the link between “wildfires”and DEWs.

A red line can be seen shooting from Oregon towards the fire in California. There’s also footage of an unusual beam shooting down from Washington.

Enhancing the brightness of the video footage revealed that someone tried to edit out the red line indicating the beam. But eagle-eyed viewers can still see the beam, even though it’s now black instead of red.

The beams seem to be some form of heat signature. One of the captured focused beams eventually splits into two.

What is a directed energy weapon?

The Department of Defense’s (DOD) Electronic Warfare publication defines a directed energy weapon as “an umbrella term covering technologies that produce a beam of concentrated EM energy or atomic or subatomic particles.”

A DEW is a system that uses directed energy to damage or destroy the equipment, facilities and personnel of an enemy. DE warfare refers to military action involving the use of DEWs, devices and countermeasures to cause direct damage or destruction or to determine or prevent the hostile use of the EMs “through damage, destruction, and disruption.”

DEWs are subject to diffraction, or the reduction of focused power caused by the dispersal of their energy in the atmosphere. This means the shorter the wavelength, the less diffraction occurs.

DEWs are used because of the following capabilities:

DEWs are also scalable, meaning one weapon can be calibrated to produce different effects by adjusting its power or frequency. DEWs can cause side effects like abdominal pains, convulsions, dizziness, epileptic seizures, nausea, temporary paralysis, tiredness and vomiting.

It’s hard to deny that these events could be linked, especially after closely examining footage of the fires and seeing the changes made to hide the unusual beams in footage from California and Oregon.

And if these beams aren’t from a DEW, what caused them and why is someone trying to erase them from the records?