Why is There a Patriotism Gap?

President Donald Trump’s announcement at the National Archives earlier this month of a forthcoming “1776 Commission” aimed at promoting “patriotic education” set off fireworks—and not in a good way.

“A nightmare,” pronounced Slate. “Part of an ongoing effort to downplay and minimize the role of slavery,” deplored the 1619 Project’s Nikole Hannah-Jones. “I thought I was listening to Mao Zedong running Communist China,” scolded Susan Rice, Barack Obama’s former national security adviser. “Proof America is spiraling toward fascism,” quivered The Guardian. Representing the ivory tower, the American Historical Association issued a florid one-pager all its own, co-signed by 30-plus groups, “deploring the tendentious use of history and history education to stoke politically motivated culture wars.”

But of course they’re going to position being positive about the nation as a Bad Thing, as opposed to what they teach now, namely that America is evil and racist and should be destroyed. 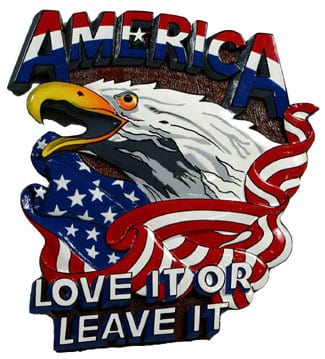 Such partisan hyperbole about the 1776 Commission might be expected so close to an election. But its critics should have stopped to ask what, exactly, might have inspired such a project in the first place. The answer is a grim reality that deserves bipartisan attention, and has for a long time now: America suffers from a patriotism gap. Republicans are much more likely than Democrats to profess patriotism. Older people are much more likely than younger ones to be patriotic, too.

For once, the answer cannot be “because of Trump.” Since at least 2001, according to regular tracking by Gallup, Republicans have been more likely than Democrats to profess themselves “extremely proud to be American”—and by wide margins. In both 2007 and 2009, for example, the patriotism deficit between Republicans and Democrats was a yawning 33 points (79-46; 78-45). In no year since 2003 has the gap been less than 14 points.

Pace the leader of the 1619 Project, and no matter where you stand in the culture wars, patriotism does matter, for at least two reasons.

First are the exigencies of domestic politics—not least for the left. Democrats and progressives hope to capitalize on the diffuse anti-authority stances of Millennials and Gen Z at the ballot box. But the patriotism gap presents an obstacle for them. It is one thing for disaffected cohorts to turn out for protests and riots in the streets. It is another to expect them to produce identification, fill out forms, stand in a polling booth and otherwise put themselves out for a country toward which many are diffident, and some outright hostile. Motivation counts. Liberals and progressives ignore the patriotism gap at their own peril.

But, Democrats are the party of governmental authority. They’ve managed to teach young mushy heads that gov’t authority and control is great but that it really isn’t authority when it is.

So since patriotism does matter, the question remains: what is smothering it among Democrats and younger Americans? This brings us to the elephant in the common room.

What, after all, do Democrats and younger Americans share that other Americans do not? Both are more likely to be found in institutions of higher learning. And as no one will contest, America’s elite colleges have been, and remain, overwhelmingly liberal and Democratic. According to Inside Higher Ed, the most thorough examination of political bias in academe—a survey of 1,417 full-time professors conducted in 2007—found that the number who identified as “conservative” was less than 10 percent.

Sadly, Mary Eberstadt doesn’t really get to the reasons why the Democrats aren’t patriotic, which boils down to “they hate America and all it stands for.” They hate the classical liberal foundings of freedom and liberty. Only by tearing the nation down can they get the Progressive (nice Fascism) government they really want, and too many people are too stupid to understand that they will give up freedom, liberty, choice, and money to this. And that all these free things and the utopia they’re promised has some serious dark ramifications. It won’t be unicorns and lollipops. Look at China, Russia, and Venezuela, among others.