As of today, there are 36 days until the most consequential election in American history. This is what they say about many past elections, but this is really it. For if the Democrats seize power – control of the U.S. House, the U.S. Senate and the Presidency – and doing it by hook or by crook (the justifies the means, you know) America as we know it will be forever changed. America envisioned and created by the Founding Fathers will disappear into the shadows of history.

Envision with me what a Socialist Democratic Party, takeover, a bloodless coup, a regime change, would look like. This is one in a series of daily articles leading up to the 2020 General Election 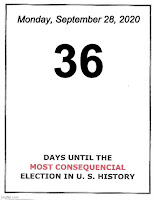 SPENDING like there’s no tomorrow, spending like a drunken sailor, using taxpayers as an ATM. That pretty much describes the Democratic Party. Mr. Trump asks for a trillion to deal with COVID (which is too much), but San Fran Nan Pelosi asks for 3 trillion. Never the twain shall meet. But the Republicans are not too far behind.

President Reagan made this wise observation, “No government ever voluntarily reduces itself in size. Government programs, once launched, never disappear. Actually, a government bureau is the nearest thing to eternal life we’ll ever see on this earth!” This fosters a lot of redundancy and waste. Smaller government is always better. It minimizes waste and maximizes accountability.

Omnibus bills are all the rage in Washington, D.C.  Not wanting to deal with tough budget decisions, Congress often waits to the last minute to avoid a government shutdown and then is forced to pass an appropriation bill that continues the status quo, it perpetuates the outrageous spending patterns of yesterday into the future.

On his government website, U.S. Senator James Langford (R-OK) notes that “In order to address America’s outrageous $23+ trillion federal debt, we need a growing economy and responsible spending reductions in the federal budget. Senator Lankford’s Federal Fumbles: Ways the federal government dropped the ball report is a collection of specific examples of wasteful federal spending and negative regulations that impact the economy. Lankford believes he has an obligation to solve the troubles of our nation, not just complain, which is why for every problem identified there is a recommended solution. There is a way to eliminate wasteful, ineffective, or duplicative program spending; develop oversight methods to prevent future waste; and find ways to get us back on track.” In his annual report Senator identifies specific areas of wasteful government spending and offers a solution. One example from his most recent report, which are found on his website, is what he calls, “$11.6 Million for Zombies COST: $11.6 million.”

His report explains,  “In an eﬀort to identify and prevent payments after death, the Social Security Administration (SSA) established a program under which states and US territories can voluntarily contract with SSA to provide the agency with death data to compare with its records. States electronically submit death reports to SSA, and SSA automatically posts the state death information and terminates payments to deceased beneﬁciaries. Unfortunately for taxpayers, Puerto Rico does not have such a system in place, which has led to millions of overpayments to dead people. The Puerto Rico Department of Health provided SSA’s watchdog, the Oﬃce of Inspector General (OIG), with the vital records data of approximately 568,000 Social Security number holders who died in Puerto Rico from January 1992 through December 2016. OIG matched the data against SSA payment records, and their ﬁndings were incredibly concerning. OIG found that SSA issued approximately $11.6 million in posthumous payments to 149 beneﬁciaries who died in Puerto Rico during that time period. OIG also identiﬁed 33,258 non-beneﬁciaries who were deceased according to vital records at the Puerto Rican Department of Health but whose death information was not in SSA’s system, which could potentially lead to further improper payments.”

More of our representatives need to take an interest in identifying waste in government expenditures.

Speaking of egregious wasteful expenditures, expending limited resources to prop up national public radio (NPR) and public broadcast service (PBS) is mind-boggling.  These entities receive federal taxpayer dollars to present highly biased, Leftist-orientated programming. They along with the mainstream media function as public relation or marketing firms of the Democratic Party and all Leftist causes. The Party and not the People should be paying for these propaganda machines!

A balanced budget amendment to the Constitution would require that expenditures should not exceed revenues. It is a proposal which has been introduced in Congress almost every two years, without success, that would limit the federal government’s spending to no more than it generates in revenue from taxes in any fiscal year.

TheStreet.com’s website defines Zero-Based Budgeting as “a concept where the budget for the next budgeting cycle for an organization, often a calendar or fiscal year, starts from a zero base as opposed to an increase off the current spending levels. Under this process, the budget amount for a department or even a line item must be justified both in terms of the purpose of the budget and the amount to be included in the budget.” Some form of this kind of budgeting should be implemented throughout government.

Benefit-Cost Ratio/Analysis, or Just Say ‘No’

Members of Congress need to start saying no to unaffordable, unnecessary, and those expenditures where costs outweigh any benefit. They could use the benefit-cost ratio (BCR) and analysis which is an indicator showing the relationship between the relative costs and benefits of a proposed project, expressed in monetary or qualitative terms.

We finally have a businessman in the White House. He has dealt with the real world. Routine concepts like the need to operate at least on a breakeven (expenses not exceeding revenue) basis and the need to justify all expenditures are sound business principles that could and should be applied to the government enterprise as well.

The Democratic Party will maintain the status quo, which is spend, spend, and spend. The Republicans under President Trump if he can reign in the rogue Deep State undermining could implement some practices that will better control spending.