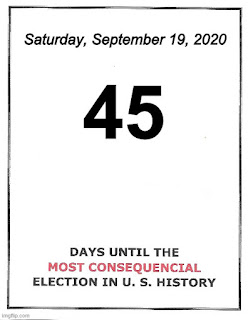 As of today, there are 45 days until the most consequential election in American history. This is what they say about many past elections, but this is really it. For if the Democrats seize power – control of the U.S. House, the U.S. Senate and the Presidency – and doing it by hook or by crook (the justifies the means, you know) America as we know it will be forever changed. America envisioned and created by the Founding Fathers will disappear into the shadows of history.

The ungodly secular-humanists/Marxists slow march through America’s institutions over the last 100 years or so will have reached a crescendo – fulfilling Mr. Obama’s fundamental transformation of America. Never again will the demonic Democratic Party relinquish its grip on political power and control of the masses.

Envision with me what a Socialist Democratic Party, takeover, a bloodless coup, a regime change, would look like. This is one in a series of daily articles leading up to the 2020 General Election

BOTH major political parties have done virtually nothing about our Debt except to continue to raise it. The Republicans say they are concerned about it but do nothing. The Democrats pretend that it doesn’t exist and ignore it.

“Simply put, national debt is the total amount of debt a federal government has borrowed and, therefore, owes to creditors or back to itself. National debt is a very important element of a country’s financial system.”

A recent MarketWatch.com article title read, “U.S.’s annual budget deficit tops $3 trillion for the first time ever after coronavirus relief.” The National Deficit for the current fiscal year (FY2020) which ends in September will be triple what it was last year (FY2019).

It seems that only the 40 or so member conservative Freedom Caucus in the U.S. House is the sole entity in Congress that is concerned about the rising debt and deficits. The call for logically cutting the budget in other areas to pay for increased emergency expenditures. But neither the Republicans and especially not the Democrats want to touch their favorite expenditures or make the necessary hard choices of where to cut spending.

There is so much waste throughout government in both labor and expenditures. The bad spending practices throughout government along with deep state resistance make it tough to identify and stop. Just one example cited by Mr. Trump in his Constitution Day speech at the National Archives was the anti-American training “Critical Race Theory” provided within most if not all Departments must first be investigated and then stopped. How many of such wasteful, even hurtful programs are being paid for by taxpayers?

To have any chance at curbing the overspending and misspending at all President Trump must be re-elected. To further aid him, Republican majorities in both the U.S. House and Senate are needed.   Even then least it will be difficult to deal with the bloated bureaucracy throughout the government.

If the Democratic Party wins the Presidency, retains the House and wins the Senate, you can kiss any fiscal restraint goodbye and say hello to more debt across the board. Democrats will spend, spend, spend. You can be sure that the Democrats will raise taxes, increase spending and move the country closer and closer to bankruptcy seeking their imaginary socialist utopia.

The choice is clear in November when it comes to who would do a better job regarding restraining and dealing with the debt.