As of today, there are 49 days until the most consequential election in American history. This is what they say about many past elections, but this is really it. For if the Democrats seize power – control of the U.S. House, the U.S. Senate and the Presidency – and doing it by hook or by crook (the justifies the means, you know) America as we know it will be forever changed. America envisioned and created by the Founding Fathers will disappear into the shadows of history.
The ungodly secular-humanists/Marxists slow march through America’s institutions over the last 100 years or so will have reached a crescendo – fulfilling Mr. Obama’s fundamental transformation of America. Never again will the demonic Democratic Party relinquish its grip on political power and control of the masses.
Envision with me what a Socialist Democratic Party, takeover, a bloodless coup, a regime change, would look like. This is one in a series of daily articles leading up to the 2020 General Election 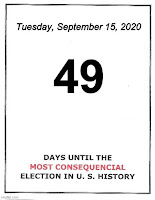 THE past two days,  Part 1 (American History) and Part 2 (American History)we discussed how the teaching of American History is being distorted in the American public school. We also looked at some things have other factors that have impacted and have moved America off of its historical foundations.
Coach Dave Daubenmire in his September 2020 newsletter wrote, “America’s public schools opened the door to confusion nearly 3 decades ago with the introduction of “moral relativism” into the curriculum of our public schools. This is also known as “situational ethics” which teaches that thee is no absolute truth and that much of what we call sinful behavior is acceptable because of the “situation” you find yourself in. According to this Demonic philosophy abortion is “moral” because a woman ha a right to do what she wants with her own body. Stealing is OK if you are poor. Divorce is ok if you no longer are “happy” in the marriage. As a result, we now have at least two generation of Americans who no longer believe in “ABSOLUTE” right or wrong. Truth has become an opinion.”
Moral relativism together with the fallout from the Vietnam War protests and the sexual revolution of the 1960s along the diabolical teaching of a distorted version of American history have all contributed to the false beliefs, disrespect, ignorance of true American History of many young people today.
Moral Relativism
I came across this Daily Signal podcast transcript, “Cal Thomas on Threat of Moral Relativism, Anarchy in Streets, which talks about American history.

Can you talk about ways that America can turn this around? Of course, nothing in history is inevitable. There’s no eventual arc of history. Is there a way for Americans right now in 2020 to turn things around, to really start to change the direction of the civilization so that we potentially have another 250 years of greatness in the United States?

Thomas: Well, I think there are two ways. No. 1, which I think most people could identify with, is we’ve got to rescue the next generation. You can’t expect to put your children and grandchildren in … progressive schools, where they’re taught that they evolved from slime and their nearest relative is down at the zoo, and that’s why they like bananas on their cereal.

They rewrite the history of America. They teach that America is not a unique nation and not a great nation. And then they send them off to universities, where it’s even worse.

Now, we don’t send our troops to enemy countries like Iran, Russia, China, to be trained there. We train our troops here, and yet we send our children and grandchildren into the enemy’s camp, if you will, to be trained in ideas and ideology that is counter to what the Founders intended and what the Constitution says and undermines not only their intellectual foundation, but also their moral and spiritual growth, and expect them to come out of these places with the same kind of beliefs and ideology that we sent them into.
It’s the most crazy thing I’ve ever heard. And I’ve heard all kinds of excuses on why conservative and Christian parents send their kids into these places, but none of them make any sense. That’s one thing.
The other thing is, as many have said before, that we need a spiritual revival in this country. And for those who are Bible believers, this only comes from God himself. It doesn’t come from the politicians. It doesn’t come from Washington. It doesn’t come from think tanks or anywhere else.
If you look at the revival of 1857, it’s a great example of the thousands and thousands and thousands of people [who] were converted when it happened. And they all started living different lives. And that had a cultural impact. We’ve got it backwards. We think by electing the right people or reelecting the right people, things are going to get better.
In fact, it’s bottom-up. It’s not top-down. When the people, we the people, decide to live by different values and different objectives, then we’re going to see that reflected at the top. But as long as we continue to think that the answer is in government and in politics, it’s never going to work.

Higher Education Institutions are Turning Out Marxists
An overwhelming percentage of college professors are Democrats or even hardcore Marxists and have stamped their image on students in colleges and seminaries for decades upon decades. One of the increasingly common occurrences on college campuses is the shaming, cancelling and silencing of conservative and Christian voices on campus. The Democratic Party supports if not openly but by their silence, such disgraceful and unconstitutional behavior. The Republican Party under President Trump has begun to consider defunding those institutions that allow such inappropriate behavior on taxpayer funding institutions.
Many of these colleges and universities literally serve as domestic terrorist training centers. College students, graduates, and college aged young people are out on the streets removing statues, demanding name changes for any historical figures that they consider to be “racists.” They are also either part of Antifa or the Black Lives Matter organization or working under their direction to riot, to commit arson, to vandalize, to harass, commit assault police and innocent bystanders, and even to commit acts of murder. They infiltrate peaceful protests. Creating chaos is one of the major objectives of these Marxist-inspired revolutionaries.
Rejecting American Value
Speaking of the Marxist Black Lives Matter (BLM) organization, they have specifically listed on their website their disdain for and destruction of traditional American values such as the importance of the nuclear or natural family (biological male and biological female with biological or adopted children).
Media & Entertainment
One recent example of distorting history on television is the mini-series, Mrs. America. This production portrays Phyllis Schlafly in a negative, dishonest light, which is typical of characterizing Schlafly founded, Eagle Forum, on its website posted this article in response to the mini-series about Schlafly,“”Mrs. America Is Historical Insult Fiction that Plays “Fast and Loose with the Facts.” The article states, “Mrs. Americaproducers deliberately replaced truth with prevailing (liberal) biases.”
Conclusion
The Democratic Party buys into and fosters a distorted, dishonest view of America and American Exceptionalism. America has not been a perfect nation, but it has been the best that this world ever offered. Socialism, Marxism or communism has never really worked where it has been tried. Why would anyone think it would work here?
A Republican U.S. House of Representatives, Senate and Presidency would give America the best chance of recapturing our history and building on the best aspects of it. America can once again be proud to be Americans. The Democrats give us nothing to be proud of, they only give us something to reject and to detest. Let’s Make and Keep American History truthful, honestly portraying the good and the bad. Let us learn from history and not to repeat the socialist experiments of the past!