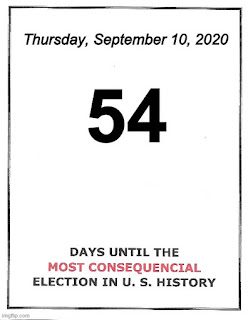 As of today, there are 54 days until the most consequential election in American history. This is what they say about many past elections, but this is really it. For if the Democrats seize power – control of the U.S. House, the U.S. Senate and the Presidency – and doing it by hook or by crook (the justifies the means, you know) America as we know it will be forever changed. America envisioned and created by the Founding Fathers will disappear into the shadows of history.
The ungodly secular-humanists/Marxists slow march through America’s institutions over the last 100 years or so will have reached a crescendo – fulfilling Mr. Obama’s fundamental transformation of America. Never again will the demonic Democratic Party relinquish its grip on political power and control of the masses.
Envision with me what a Socialist Democratic Party, takeover, a bloodless coup, a regime change, would look like. This is one in a series of daily articles leading up to the 2020 General Election
Which party is pro-Second Amendment, and which is pro-Gun Control?  That’s easy. The communistic Democratic Party is for gun confiscation. The liberty-oriented Republican Party is for citizens maintaining the inalienable right to bear arms.
Democratic Party Targets Guns
“The 2020 Democrat Party platform is rife with gun controls that include an all-out ban on online ammunition sales and a push to require every state in the Union to license gun owners.” That statement is from an August 2020 Breitbart article.  Some other gun control policy items which the article mentions which the Democratic platform includes are:
Ø  securing universal background checks (13 states already have these checks)
Ø  banning online gun sales
Ø  open gun makers up to lawsuits by repealing the Protection of Lawful Commerce in Arms Act (2005) that shields gun manufacturers from civil liability
The Democrat politician is always quick to blame the gun for the crime especially school shootings. They seem to lose sight of the fact that there is a human being using the gun. The criminal is the problem. It is not the gun, which is an inanimate object. It cannot shoot itself.
Just look where the most restrictive gun laws are currently in effect. Take Chicago for example. There are more murders there on any given weekend than almost any other place in America. What eventually happens is that guns get confiscated, restricted or licensed for law abiding citizens, but the illegal guns in the hands of gang members and criminal elements are not dealt with. So, you end up with only bad guys having the guns.
In states that allow concealed carry, no or less restrictive gun laws there is usually less crime. The criminal never know when he might be messing with someone who is carrying. That is a great deterrent.
Republicans Support the Second Amendment
Unlike their counterpart, the Republican Party wholeheartedly supports the right of citizens to bear arms.

We uphold the right of individuals to keep and bear arms, a natural inalienable right that predates the Constitution and is secured by the Second Amendment. Lawful gun ownership enables Americans to exercise their God-given right of self- defense for the safety of their homes, their loved ones, and their communities.
Ø  We support firearm reciprocity legislation to recognize the right of law-abiding Americans to carry firearms to protect themselves and their families in all 50 states.
Ø  We support constitutional carry statutes and salute the states that have passed them.
Ø  We oppose ill-conceived laws that would restrict magazine capacity or ban the sale of the most popular and common modern rifle.
Ø  We also oppose any effort to deprive individuals of their right to keep and bear arms without due process of law.
Ø  We condemn frivolous lawsuits against gun manufacturers and the current Administration’s illegal harassment of firearm dealers.
Ø  We oppose federal licensing or registration of law-abiding gun owners, registration of ammunition, and restoration of the ill-fated Clinton gun ban.
Conclusion
The Republicans are the Law and Order party and hold public safety as a priority. In radical opposition to the second amendment, the Democrats are the party of lawlessness and chaos. What a contrast between the two parties!
The voter has a clear choice come election time this fall.