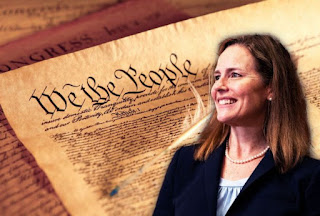 Today, by a 52-48 vote, the United States Senate confirmed Amy Coney Barrett as the latest justice to the U.S. Supreme Court, the third by President Donald J. Trump.

Studying her history, and her testimony during the confirmation process, Barrett is a constitutional originalist who not only tips the court-majority over to the side of the rule of law, but likely will keep us from spilling over the edge into socialism if the courts have anything to say about the liberal left’s assault on American Liberty.
“Justice Barrett made clear she will issue rulings based solely upon a faithful reading of the law and the Constitution as written not legislate from the bench,” Trump said during a swearing in ceremony at the White House. ““The American people put their trust in you and their faith in you as you take up the task of defending our laws, our Constitution and this country we all love.”

The process to replace Justice Ruth Bader Ginsburg took less than 40 days, during which the Democrats did their usual screaming and yelling, adding to their complaints the quickness of the confirmation, and the very fact that it happened before the election.

Justice Clarence Thomas administered the Constitutional Oath to Barrett, and Chief Justice John Roberts will administer the Judicial Oath to her in a private ceremony at the Court on Tuesday.

The vote in favor of Amy Coney Barrett included all Republicans except Senator Susan Collins of the State of Maine.  All of the Democrats, along with two liberal left independents who normally caucus with them, voted against Barrett’s confirmation.

While Schumer blasted the process as “a decades-long effort to tilt the courts towards the right,” the Democrats have been silent about their desire to pack the court so that it leans left if they were to somehow pull off the presidential election and win back a majority in the U.S. Senate.  In truth, Barrett does not represent a move to the right as much as her confirmation represents a move to the middle, where the U.S. Constitution technically resides.  As for the talk about the court leaning left, or right, the truth is the court is supposed to be apolitical.  Ideological leanings are not supposed to matter since the job of the justices is not to support and defend a particular political party as much as it is to support and defend the U.S. Constitution.  Their job is to apply the law, and the Constitution, as it is written, and as it was originally defined, without political leanings playing a part.

The fear of the Democrats is that Barrett seeks to erase all of their liberal left advances, be it Obamacare, abortion, or any other unconstitutional federal intrusion.  But, as Barrett indicated, the courts can’t just decide to take up an issue on its own.  A case must be presented, and if one is, then she has stated she will rule based on an originalist application of the law of the land, regardless of party preference.

The rule of law, after all, is what we are supposed to be about, right?
– Political Pistachio Conservative News and Commentary