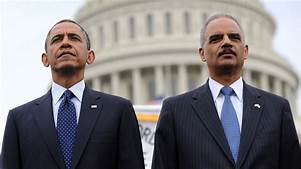 This is a follow-up from yesterday’s article which implicated several prominent Democrats who are actively involved in treasonous acts against Trump and the United States.

One might think given all the knee-jerk reaction to the New York Post’s publishing the tale of Hunter Biden’s salacious and criminally (ie Joe Biden’s influence peddling, malfeasance of office, and treason) convicting laptop contents that this was by far and away the most controversial story ever published by the New York Post. Well, that would an incorrect assumption.

Back in February of 2017, only one month after the inauguration, the New York Post published about Obama’s secret army we call the OFA, “The little-known but well-funded protesting arm had beefed up staff and ramped up recruitment of young, liberal activists. Determined to salvage Obama’s legacy, it’s drawing battle lines on immigration, Obamacare, race relations and climate change.”

What is amazingly obvious as one digs deeper into Obama’s OFA, is how powerful they are and scarcely anyone has ever heard about them or their radical agenda and nefarious agenda. One interesting example of the far-reach of the OFA is that Hillary Clinton’s closest subordinates support the radical agenda of “defunding the police”. Clinton and Obama aren’t exactly the best of pals, but when it comes to the radical agenda of the treasonous act of ridding America of its first line of defense, the police, they are united on this point. Hillary’s former spokesperson for her campaign, Brian Fallon, recently tweeted out “defund the police”.

If one seeks to find the nexus behind fomenting race riots, planning and activating uncontrolled rioting that their allies in the mainstream and Big Tech media label, “Peaceful protests”, the Obama group that was exposed in yesterday’s article on the CSS, Organizing for Action (OFA), is proving to be that nexus point. The OFA is proving to be both diabolical, disgraceful, treasonous and the group that is sitting at the Captain’s chair in terms of overthrowing the Trump administration and the United States of America.

Also in February of 2017, Obama’s secret group of warriors, the OFA, The Hill published the fact that there was a major merger brewing between the OFA and the former disgraced Attorney General, Eric Holder and his group the National Redistricting Action Fund, giving the group access to a cadre of very wealthy donors and volunteers. In effect, the OFA will marry and integrate with the Holder-run group (NDRC). The newly formed merger is telling. Holder has reunited with his former boss. What caused Eric Holder to exit his position as Attorney General under Obama. Simple, he was found guilty for lying to Congress and refusing to answer questions posed in the formal congressional hearing looking into the matter, “Fast and Furious”.

Fast and Furious is best described in the following statement of findings in a series of Reuters reports.

During the operation from 2009-2010, thousands of AK-47s, .50 caliber rifles and other weapons were purposely allowed by ATF and Department of Justice officials to be purchased illegally by straw buyers at gun stores in the United States and trafficked over the border into Mexico. ATF officials sat by as thousands of guns “walked.” They argued this was done to trace weapons to the upper echelons of Mexican cartels, but out of thousands of firearms, only two were rigged with GPS devices that died within hours of crossing the border.

On December 14, 2010, Border Patrol Agent Brian Terry, a former police officer and U.S. Marine, was shot and killed while on a BORTAC mission near Rio Rico, Arizona. The weapons left at the scene were obtained through Operation Fast and Furious.

Terry’s family has been repeatedly lied to about the circumstances of his death. ATF and DOJ officials moved quickly to cover up the scandal behind how his murderers got their guns.

It wasn’t until Terry was killed that knowledge of the program came into public view. ATF agent John Dodson, who opposed the operation internally, became the first whistleblower to speak out.’

It is obvious to state that merging the OFA with Holder’s group potentially provides OFA with unlimited funding and unlimited access to obtain needed weapons which can be passed on to radicalized leftist groups such as Antifa. However, there is a problem in this cash and weapons transfer. The process had to change because Holder got caught and it cost him his Attorney General position. It should have cost him his freedom. As one may recall, Holder’s cartel-supplying weapons program was exclusively using domestic gun shops and manufacturers to provide the Fast and Furious weapons to the cartels. Holder was busted and the strategy had to change.

I have a deep undercover DEA source that told me in 2015, that Holder had employed his Communist Chinese contacts to continue Fast and Furious for the cartels. And who did Holder turn to? He turned to the CHICOMS. Today, it is a well-established fact that the cartels basically control the cartels and their drug trade. Mexican President AMLO is no longer on board with this arrangement and a civil war is brewing in Mexico as AMLO has pivoted towards Trump with a secret pledge to not allow Mexico to become a staging area for a Red Dawn invasion. The CSS has published reports and conducted interviews with people south of the border on these points. Today, the cartels are mechanized courtesy of the CHICOMS.