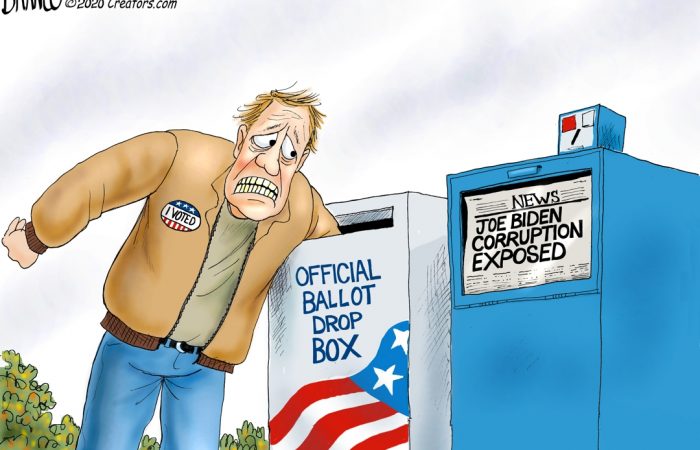 By: Devvy Kidd / News With Views

The DNC’s media (CNN, MSNBC, ABC, CBS, NBC and all “mainstream” print and Internet) have done everything they can to cover for Joe Biden.  Tech giants are continuing to blatantly censor everything regarding Hunter Biden’s laptop computer and the Biden crime family influence peddling over the decades.

They’ve also jumped through hoops to minimize all his gaffes, outright lies and more importantly the glaring fact that 77-year old Joe Biden has advanced dementia and is not capable of being president of these united States of America.

Not mentally capable of negotiating treaties or as Commander-in-Chief of our armed forces. Period.

A candidate who has promised to reward those who smuggle themselves across our border – some 30-40 million illegal aliens- by giving them amnesty which will open the flood gates for more destruction and raping of our country. Not Trump’s Fault: Honduran Mother Sends 7-Month-Old Baby Across Rio Grande with Teen Brother So US Will Take Care of Them

Elected Democrats as well as their media are trying to convince voters they should vote for Biden over Trump because of Trump’s personality, his tweets, he’s the orange man.

But what about world leaders?  You know, the ones the next president will have to deal with at summits and other events where world leaders gather?

What do they see watching Joe Biden?

Some might call Biden’s gaffe’s funny.  They are not funny when considering electing the next leader of the free world.  What’s also NOT funny is watching an old man with advanced dementia struggle to try and sound coherent when he’s not.  When Biden can’t unscramble his thoughts, desperately searching to speak without breaking down.

A frail old man with the power to order a nuclear attack on a foreign country.  To send our men and women into war which we all hope will not happen any time soon.  An individual who should be in a nursing home, not being dragged out of his basement by his wife and handlers to make a fool of himself to the world.

Imagine Putin, Macron, Merkel, Xi Jinping, Trudeau and other world leaders watching the two videos below.  What are they to think?  That the American people would be so stupid as to elect someone staring at potential criminal charges (son’s computer and influence peddling, perhaps trouble with the IRS and more) who is unable to concentrate or sound coherent enough to cite even half the alphabet.

I’m surprised You Tube hasn’t censored the two videos below.  Yet.  I do hope you will help make this go viral, post on every form of social media there is and if you know someone who is a Democrat or independent voting for Biden, just ask them diplomatically to watch them and give you their feedback.

As I mentioned in my October 26, 2020 column, seven states allow people to change their vote.  I found this which is very telling:  Google Searches for ‘Can I Change My Vote’ Spike Following Hunter Biden Sex Tape Release

Both of those videos are painful to watch but make no mistake:  World leaders are watching.

How about the shadow government’s VP pick for him, Kamala Harris, known to be a nasty piece of baggage?  Harris was among the large roster of Democrat candidates who was first to drop out of the race last December before primary voting even started.

No one wanted her to be president.  Not women of any color or men or by race.  She never garnered more than 7% of the vote.  Now, we see women giddy to the point of wetting their pants they have a female with dark skin (which is the only skin color allowed for the ticket) with the right plumbing suddenly is qualified to be president when they retire Joe Biden not long after swearing in, God forbid.

Contrary to the image Harris’ likes to project, she really isn’t very intelligent and the world now knows she got her career boosted by sleeping with the former mayor of SF, Willy Brown, which is why she’s known as Ho Harris.  The casting couch was her “empowerment” method.  She was 29, he was 31 years her senior.

Democrats and independents had better think real hard before they vote based on their favorite issue, skin color, gender or because they don’t like Trump’s tweets.  Joe Biden is mentally incapable of being the next president and world leaders know it.

Help me inform Americans with my book, Taking Politics Out of Solutions.  400 pages of facts and solutions on these issues: “Federal” Reserve, the income tax, education, Medicare, SS, the critical, fraudulent ratification of the Seventeenth Amendment and more.  800-955-0116 for phone orders

Exclusive Source:  Biden Daughter’s Details ‘Not Appropriate Showers’ With Joe As a Child – You have to read all the way down. “Was I molested? I think so.”  “National File, as the media organization that published reports about the Pelosi family’s Ukraine dealings and the potentially illegal affairs of Democrat Senate candidate Cal Cunningham, believes the public has a right to read these entries that were obtained for National File by Patrick Howley, the reporter who broke the Veterans Affairs scandal, and the Ralph Northam racist yearbook photo.”

“Four Years Ago,” Trump Was “my last choice”…”Now, I will walk across a vast plain of burning coals to cast my vote”

‘The Plot Against the President’ documentary explores attempts to link Trump campaign, Russia

“The documentary chronicles Rep. Devin Nunes as he “uncovered the operation” to bring down Trump and has been adapted to include the developments that have come out since the book was released last year.”  Sign in to watch at bottom of article.

Biden owned by Russians and Chinese: It’s all coming out now: Biden can NEVER be President: Family paid off by Russians- 200 Million plus. One America is on it.

*Please Clap* Joe Biden Speaks to Handful of Supporters in Chester, Pennsylvania (VIDEO) – Looks to be maybe a dozen supporters there.

Texas prepares to send 1,000 troops to five major cities as the US braces for post-election violence