How many in 2016 checked the box for Trump/Pence, more as a vote against Hillary Clinton than for Trump? Things have changed

Four years ago, the media enjoyed covering the phenomenon of so-called Never Trumpers; Republicans who wouldn’t vote for Donald Trump.

There was speculation that these voters, many well connected to the Washington establishment, would put the icing on the electoral cake for Hillary Clinton. Of course, this notion proved fanciful. The Never Trumpers are back in 2020. They’re no greater in number, but the media has gobbled it up again.

I love all those conserving conservatism unhinged Never Trumpers who are intent on voting for Biden and far, far left Democrats. It’s not so much Biden I worry about, it’s losing the Senate and Biden getting the W. Sure, Biden would do bad things if the GOP still retained the Senate, like Obama did, especially with unhinged Modern Socialist Kamala as VP, and, I just don’t think he has the mental awareness and strength to fight off the super crazy of his political Party. With a Dem Senate, though, we get tons of the Crazy in legislation, a lot harder to get rid of. The Never Trumpers are pushing for this. They don’t even have the integrity to vote 3rd party 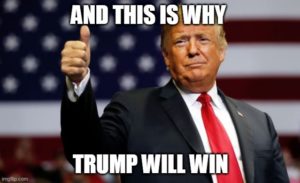 But there’s another group of Republicans: those who enthusiastically supported GOP candidates other than Donald Trump before he was nominated. They remained cautious about Trump even after the Republican National Convention. Ultimately, though, they pulled the lever for Trump over Hillary. Call them “Reluctant Trumpers.”

They’re still around, too. But’s there’s a difference: they are now enthusiastic Trumpers. I know. I’m one of them. (snip)

When I met up with Joe this year, however, I was interested to find that, like me, he’s “all in” for Donald Trump. No longer reluctant in his support, Joe Schmuckler is suggestive of two things: the significant number of Republicans whose support for Trump has moved from tepid to enthusiastic and a growing wave of intensity in overall support for Trump.

“I missed it,” Schmuckler told me, referring to 2016. “It wasn’t until after he was president that I fully understood the power of Donald Trump’s message.” He could have said WE missed it.

Schmuckler is far from alone. His simple explanation – that watching Trump truly put America First convinced him that Trump was action more than talk – is something I’ve heard repeatedly from former Reluctant Trumpers.

Look, I did not trust Trump in 2016. The way he was running his campaign was strange, and many of the bloggers in the circle wondered if he was intentionally attempting to lose. So much of his past discussion on policy seemed to paint him as a NY Liberal. Border wall? Seemed patronizing. He’s still too slimy personally (he’s just overt about it, as most politicians are slimy), but, he get things done that Conservatives/Republicans should be happy about.

In those days, he was a moderate Republican. When 2016 rolled around, Trump was No. 17 of the 17 major Republican presidential candidates on Warren’s dance card. Not this year. “I’m 1,000% in support of Donald Trump,” Warren told me recently. “Even when I was running myself, I didn’t feel as strongly as I feel about this election.”

Warren believes that Trump will be regarded as a great president, not merely a good one. He also sees Joe Biden’s aggressive move leftward as genuinely frightening. “I fear as I’ve rarely feared anything what a Biden win would do to America.”

This is what I tell the “well, I could vote Trump, but, I don’t like him folks”: yeah, Trump is Trump, but, being bellicose and stuff is just who New Yorkers are, but, look at his actual record, then think about what Biden would bring. Hold your nose and vote AGAINST Biden, if it soothes your conscience.

For Goodman, Trump’s willingness to challenge China is a huge factor in his support for the president. “He’s the first president to really call China on the carpet,” said Goodman. Likewise on immigration. “We’re now having a real conversation about citizenship. Trump has highlighted the fact that we either have real borders or we don’t.”

That’s just one reason. Biden would be a disaster for foreign policy. Alone, he could rejoin Paris Climate Agreement, reinstitute the Clean Power Plan, perhaps in a way that the courts do not stop, put back the massive Big Government Waters of the USA rule, restrict drilling and mining operations for oil and natural gas, start working with Iran again, and so much more. And that’s without a Dem Senate. It’s no wonder the media tried to keep this a campaign about personality rather than policy.