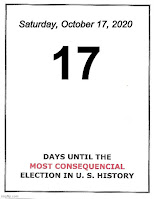 As of today, there are 17 days until the most consequential election in American history. This is what they say about many past elections, but this is really it. For if the Democrats seize power – control of the U.S. House, the U.S. Senate and the Presidency – and doing it by hook or by crook (the justifies the means, you know) America as we know it will be forever changed. America envisioned and created by the Founding Fathers will disappear into the shadows of history.

Envision with me what a Socialist Democratic Party, takeover, a bloodless coup, a regime change, would look like. This is one in a series of daily articles leading up to the 2020 General Election.

BOTH the Democrats and the Republicans say they want prison reform.  They differ as to how they want to implement the needed changes.

Yesterday (see the Day 18 post) we saw that during the recent riots some Democrat governors and leaders moved to release prisoners afraid that they may become infected with COVID-19 seemingly not caring about releasing criminals earlier would affect society.

The generous Democrats also want to reduce the penalty for marijuana use. It makes one wonder if the prisons being cleared out to make room for those who oppose the Harris-Biden tyrannical rule following, God forbid, their election.

The Republicans want to see an end in creating more criminal offenses in which to prosecute, to reduce government regulations in the legal system.

Both major political parties seem to have some good intentions, but I don’t hear too much about restitution, the victim, or the cost to the taxpayer of criminal behavior. I have pondered what real prison reform could look like. Such reform may need to involve reforming the current legal system to some degree as well. Here a few ideas that might make a real difference.

Investigate, Identify and Work on Resolving the Causes of Crime

There need to be an intensive study of what causes crimes in the first place and develop policies and programs to prevent crimes. One important area to look at may be welfare reform where fatherhood is discourages and fatherlessness is encouraged. This is probably one of the greatest causes of crime especially in minority communities in large metropolitan cities, but everywhere. We need to look at the education system, the welfare agencies, the churches, etc. to come up with a comprehensive plan to prevent incarceration.

For those who commit crimes, there must be both a penalty to pay, a restitution component, and a rehabilitation component.

One key component of any prison reform should revolve around restitution and rehabilitation. A meaningful work repayment plan should be part of any incarceration. All costs associated with a crime should be determine, including amount of money stolen, child support not paid, court costs, housing, food, security, etc. and a work repayment plan should be developed with a target date of projected release date. The goal is to make restitution for the crime – to the victim and to society – committed and in doing so providing an opportunity for the inmate to be rehabilitated. Merely putting in time is insufficient.  Expecting a productive 40-48+ work week would not be excessive punishment, but the minimum expected. Again, perhaps the amount of time expected to be worked per week should be customized for each individual by the overall costs involved.

The type of work would depend on the prisoner’s skills, ability and knowledge. If he lacks any of he above he or she should be required to take training in some field offered either in-class training and/or internet-based training until he has the necessary qualifications to do the job assigned. Type of work could be helping with infrastructure building or repair, farming, warehouse, food service, manufacturing.

Consideration should be given to export uncooperative inmates to a foreign nation subcontracted with the United States and staffed by American supervisors and some staff. Inmates who refuse to work would remain in that country until their projected release date as well as any time added for poor behavior. This portion of the program could be part of foreign aid packages which we have with one or more foreign government.  These facilities would be more austere than facilities here in the United States. Punishment must fit the crime.

Yes, instead of exporting jobs, why don’t we consider exporting noncompliant criminals, which could be integrated into our foreign aid package?

Our prison system needs reform.  Which party would be in the best position to reform the prison system? The Republican Party platform contains more traditional values such as faith, family and freedom. The Democratic Party touts progressive, politically correct ideals, which fly in the face of tradition, virtue and morality. The Republicans would be better suited to address the issue of presenting crimes because they are less apt to see the government as the solution to the crime problem. They would consider the government as part of the problem (failed welfare, education policies and programs