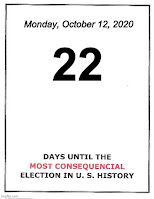 As of today, there are 22 days until the most consequential election in American history. This is what they say about many past elections, but this is really it. For if the Democrats seize power – control of the U.S. House, the U.S. Senate and the Presidency – and doing it by hook or by crook (the justifies the means, you know) America as we know it will be forever changed. America envisioned and created by the Founding Fathers will disappear into the shadows of history.

Envision with me what a Socialist Democratic Party, takeover, a bloodless coup, a regime change, would look like. This is one in a series of daily articles leading up to the 2020 General Election.

THE areas in which discrimination laws focus on are primarily employment, education and housing. One cannot by law discriminate based on age, disability, sex (biological), or ethnicity. These are immutable characteristics.  An judicially activist U.S. Supreme Court unconstitutionally has tried in its Bostock edict to change the law by changing the definition of sex to now include how one feels or thinks they are, which is contrary to their biological reality. Therefore, this whole issue of discrimination has been severely clouded.

The Democratic Party celebrated the recent Supreme Court Bostock v. Clayton County decision that made clear that employment discrimination that is based on sexual orientation and gender identity (SOGI) violates the law. The Democrats will be fighting tooth and nail to get the so-called Equality Act made into law. You can be sure that if the Democrats win the White House and both houses of Congress that the Equality Act will become the law of the land. We can expect significant religious discrimination will result.

The Equality Act is unnecessary because everyone is already covered by the current laws. But what the Democrats want are special rights and privileges to justify lesbian, homosexual, bisexual and transgender unseemly behaviors. Society would be forced to ignore reality and bend to the will of a mistaken minority of perverted and confused individuals.

The Republican Party platform opposes “reshaping our schools—and our entire society—to fit the mold of an ideology alien to America’s history and traditions.” The Obama Administration’s edict to the states concerning restrooms, locker rooms, and other facilities is at once illegal, dangerous and ignores privacy issues. (page 35 of the 2016 Republican platform which was carried forward to 2020).

Are Affirmative Action Plans Themselves Discriminatory?

You could say that granting special rights based on behavior discriminates against others in society. I am thinking primarily by granting the right to marriage to two same sex individuals is discriminating against others in society by legalizing perverse or dysfunctional behavior. The Supreme Court in its Obergefell v. Hodges decision not only committed an unconstitutional act it discriminated against the sacred institution of marriage. It essentially redefined marriage.

Another area where reverse discrimination comes into play is with some of affirmative action decisions. The intention was probably good, but it makes no sense not to hire the most qualified and experienced person for a job.

The state of California recently took this affirmative action policy to a new level requiring certain percentage of ethnicities and persons with certain sexual behaviors to be required to be added to corporate boards. They call this diversity quotas. That is discrimination if persons appointed would be less qualified than others able to fill those positions.

Forbes.com recently reported in “California Lawmakers Approve New Diversity Quotas For Corporate Boards,” that California passed a bill “requiring corporations to include a minimum number of underrepresented people on their boards, becoming the first state to pass this type of diversity quota for board membership… The bill requires all public companies headquartered in California to have at least one board member from an underrepresented community by 2021 and for companies to have a minimum of three by the end of 2022, depending on the size of the board. The bill defines people as underrepresented if they self-identify as Black, African American, Hispanic, Latino, Asian, Pacific Islander, Native American, Native Hawaiian or Alaska Native or as (homosexual), lesbian, bisexual or transgender.” Is this necessary? Why not select the most qualified candidate for the job? To not to do so is discriminatory or is reverse discrimination.

Religious liberty is one of the most cherished and basic rights and freedoms that Americans enjoy. Unfortunately, our nation is quickly moving in the direction of institutionalizing religious and rights of conscience discrimination. The very first right in our Bill of Rights is “Congress shall make no law respecting an establishment of religion, or prohibiting the free exercise thereof…” But the Supreme Court and the Democratic Party apparently disagree with that right. They consider sexual behavior as trumping any religious freedom or right of conscience.  This trend can only lead to persecution of especially Christians as it often happens in other atheistic, communist, Islamist and socialist countries.