Here’s an issue that never came up during election season: Net Neutrality. It seems like a small issue, but, since most of us use the Internet, it is actually pretty dogone big. China Joe surely loves him some Big Government control of the Internet, just like Obama and China 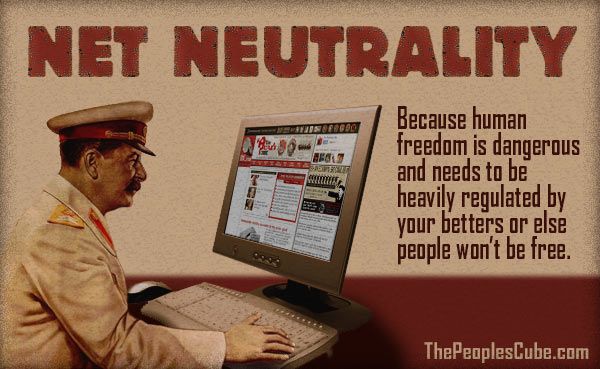 The Federal Communications Commission will confront a number of issues in the coming years, from the digital divide to social media policy to 5G infrastructure. So what could the FCC’s priorities look like under President-elect Joe Biden?

I spoke with Tom Wheeler, chairman of the FCC from 2013 to 2017. He said one major issue will likely be restoring Obama-era net neutrality rules that required internet service providers to offer equal access to content on the web. Current FCC Chairman Ajit Pai reversed those rules in 2017. The following is an edited transcript of our conversation.

Tom Wheeler: You’ve seen the beginning of particularly wireless carriers favoring their own kinds of activities. For instance, AT&T Wireless says, “Hey, if you buy [AT&T-owned] HBO [Max] from me, I won’t charge you data rates. But if you want to go to Netflix, I’m going to charge your data rates.” I think we need to have a level playing field so that there can be competition across all platforms. And that’s a new opportunity that will be opened up to the Biden FCC.

People get freebies all the time. T-Mobile gives free MLB package (I wish it was the NHL package). Who cares if people get freebies? Unless it’s just an excuse to control the mobile industry as an extension of controlling the Internet

Amy Scott: Net neutrality has been such a big issue. What do you think the consequences are of this kind of seesawing back and forth, depending on who’s in control of the White House?

Wheeler: Well, I hope that the Biden FCC can put it to bed, at least for the next four years. The Congress, if it’s possible to legislate, could do that themselves, but hasn’t been able to do that. And the concept that is behind net neutrality is something that in this country literally traces back to the Pacific Telegraph Act of 1862, which said that you need to have first-come-first-serve nondiscriminatory access to this essential service called the telegraph. It was a concept that then got extended to the telephone as it replaced the telegraph. And now as the internet has replaced the telephone as the most important network, we need to have the same kinds of concepts. And I think Biden’s return to net neutrality will return us to that kind of stability that we’ve had since 1862.

Seriously, got, that? We’re looking back to the telegraph. From 1862. It’s cute language, but, it hides the notion that Government needs to be in control in order to make things “fair.” There’s no such thing as fair. You can purchase faster speeds and more bandwith from your Internet provider and phone company. And phone companies have put A LOT, and I mean A LOT, of time and money into getting the wireless Internet to where it is today.

(The Hill) Another broadband-related issue where Biden’s position is clear is net neutrality. The president-elect has backed the Obama-era rules that allowed the Federal Communications Commission (FCC) to go after companies that discriminate against traffic.

The reinstatement of the rules that Trump’s FCC chair Ajit Pai rolled back is a near certainty, especially given the popularity of net neutrality.

Popularity? What popularity? Well, interestingly, there are polls that support the hell out of it. Sadly. Because this is not “do you prefer strawberry or grape jelly with your peanut butter and jelly sandwiches?” It is much more in depth and more involved. Back to that in a moment.

What has Joe said on the subject?

(Futurism) Biden’s campaign platform specifically calls for a return to Obama-era net neutrality rules — when Biden was serving the role of vice president, as Bloomberg reports.

In July, the “unity” task force put together by Biden and Senator Bernie Sanders of Vermont promised that Democrats “will restore the FCC’s clear authority to take strong enforcement action against broadband providers who violate net neutrality principles through blocking, throttling, paid prioritization, or other measures that create artificial scarcity and raise consumer prices for this vital service.”

Maybe? Possibly? Mark Jamison thinks there are 3 reasons Joe will not push it

Net neutrality facilitates this result by limiting funds for expanding the internet. In 2018, I demonstrated how network providers increased debt by about $264 billion to develop wireless broadband while software and content providers that use the networks accumulated about $207 billion. Unsurprisingly, Google, Netflix, and Facebook have spent billions of dollars developing specialized networks (see here, here, and here) that would not be subject to net neutrality constraints.

Without the Obama era NN, the NN all the Useful Idiots were pushing, the Internet moved way, way ahead. Just like it did before the silly and short lived NN rules. It has always worked best when government had a light touch.

Net neutrality regulation would also slow US 5G development. In 2017, I explained:

5G will use network slicing, which enables multiple virtual networks on a common physical infrastructure. Each slice can be customized for specific applications, services, customers, etc. Network slicing means the end of treating all internet traffic the same — if that ever really happened — which was supposed be a core principle of net neutrality. 5G explicitly customizes the network to different types of traffic.

Remember, regular telephone service was stifled when Government had a heavy hand in regulation. When that hand was removed, wired phone service exploded in development. I won’t spend time describing it, you can read about when you want, but, it then led to the explosion of wireless service.

Anyhow, Mark provides two other ideas, worth the read. Missing is that this is a power grab by the Government. Mark stays more in the tangible, but, the intangibles of control are important. Do you want government controlling what you write on the ‘Net? Do you want them censoring it like China? Do you want your prices to go up? Home phone service was higher priced for less service before the removal of regulation. Just like everything else, the true intention of NN is, and I cannot stress this enough, control.