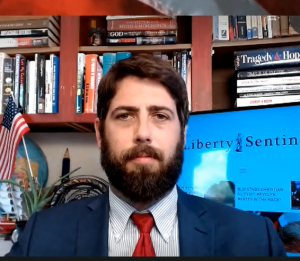 Even though every mainstream media (MSM) outlet has now called this 2020 election for Joe Biden, journalist Alex Newman says don’t buy it.  This is a continuing psyop to cover and ignore massive election fraud unlike ever seen before in the free world.  Newman explains, “This is a flagrant effort to steal this election.  We actually warned that this was coming months ago.  I said the Deep State was planning a coup d’état, a Color Revolution, and vote fraud was a central element of that operation. Now, you are seeing the other pieces fall into place.  As Donald Trump challenges this, they are going to send out the mobs.  They are going to send out Black Lives Matter and Antifa to go riot and loot.  We are already starting to see a little bit of that in Oregon . . . and New York.  It’s going to get a whole lot nastier because Donald Trump is not just going to roll over and say okay, you can just steal the election and I’m going home.”

The MSM is playing a very important role in this massive election fraud scenario.  Newman contends, “Controlling the narrative is probably the most crucial element.  They just need to make enough people think this is reality, and they can almost get away with it.  We are now seeing a full blown effort on that front.  Every time you see President Trump’s statements on this, the MSM says Donald Trump is falsely claiming the election was rigged. . . of course there was vote fraud, and I gave 20 examples of it in my most recent article.”

Newman goes on to say, “This is on a whole other level.  They are not just trying to steal our money, they are trying to steal our country, our future, our liberties and our constitutional system of government.  That is, by definition, treason.  It is waging war against the United States.  The fact that no charges are being filed and no investigations going on it tells you everything you need to know about AG Barr, the DOJ and the FBI. . . . There is a coup underway right now, a coup d’état. . . .Their goal is a complete overthrow of the United States of America.”

Join Greg Hunter as he goes One-on-One with journalist Alex Newman, who writes for many outlets such as The New American, The Epoch Times and his own site Liberty Sentinel.org.

For a copy of Alex Newman’s new book click here.