How to Understand Democrats’ Disappointing Losses in State Legislatures 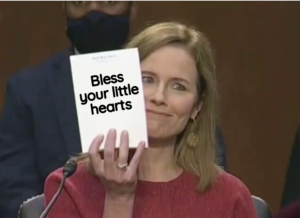 Joe Biden won the White House, overwhelmingly, but otherwise, since Election Day, the news for Democrats has been bleak. They failed to flip the Senate—though the Georgia runoffs could still give them a 50-50 tie, broken by Vice President Kamala Harris—and lost seats in the House of Representatives, where they had been projected to pad their majority. But nowhere was the news worse than at the state legislative level, where despite unprecedented investment by Democratic organizations and outside groups, and expectations that they’d flip from four to eight legislative bodies—or more, in a “blue wave” election—the party lost ground.

With surprising candor, Nicole Hobbs, cofounder of Every District, a state legislative organizing, fundraising, and data analysis group, wrote in an election post-mortem: “It was a bloodbath.”

I heard that word a lot. Also “shit show.” Most mild: “No way to sugarcoat it.”

The losses were everywhere. Not all races in all states are called, but there’s no way, even with the outstanding contests, that Democrats will flip chambers. Against all expectations, they lost the New Hampshire House and Senate. Activists hoped Democrats might pick up the Iowa and Minnesota houses; they lost five and seven seats, respectively. They seemed close to flipping both the Arizona House and Senate; despite Biden’s win, they gained only one Senate seat there. They thought they had a decent shot of flipping the North Carolina House and/or Senate; they lost an estimated four seats in the House while gaining one in the Senate. After winning 12 seats in the Texas House in 2018, there was optimism Democrats could flip it by winning nine this year; they won one.

They were given good odds of winning the Michigan House, which seems reasonable in hindsight, since Biden won the state by almost 150,000 votes; instead, zero gains. Biden also won Wisconsin, though more narrowly, but thanks to hugely gerrymandered districts, Democrats lost two seats in the state Senate, while winning two in the House. And he won Pennsylvania, but Democrats lost three seats in the House and apparently one in the Senate.

So, pretty much bad for Dems, right? What happened?

The number-one explanation: Donald Trump had long coattails, even in defeat—and Biden had short ones, even in victory. “That’s what people just didn’t see coming,” says Carolyn Fiddler of Daily Kos, long an evangelist for Democrats to pay more attention to statehouse races. “Trump wasn’t on the ballot in 2018. We don’t know what would have happened if he was.” Everyone I interviewed agreed. And the suburban “blue wave” that helped lift Biden to victory? It did not carry Democratic state candidates (or, to be honest, a lot of US House or Senate seats). “Republicans heavily voted down-ballot, where Democrats did not again,” says Joanna Cattanach, who ran and narrowly lost a second time for a Texas state senate seat in Dallas County. “And we saw a slew of ticket splitters.” I heard that all across the country. It will take a lot more district-level analysis to be sure.

So, wait, Trump had long coattails, which provided destruction in the states (and, let’s not forget all the taken House seats), yet, somehow, he lost those same states? Might it have something to do with the huge deviation in president only ballots, a giant jump that looks like, dare I say, fraud?

As with the disappointing House and Senate outcomes, some Democrats complain that the Biden campaign focused too much on Trump and not enough on the devolution of the entire Republican Party into a racist, antidemocratic swamp. As Ron Brownstein put it in a must-read Atlantic piece, “Rather than presenting Trump as the culmination of Republican policies and values, Biden consistently portrayed him as an aberration; many strategists on both sides believe that made it easier for voters to oppose Trump but still back Republicans in House and Senate races.”

Maybe people wanted Trumpism without Trump. Would it be wrong to say that Democrats focused too much on defeating Trump, legally and illegally, and forgot so much down ballot? Anyhow, Joan continues providing excuses and Excuses. One thing to remember, Obama, despite a big win and easy win in his 2nd election, lost a lot of House, Senate, and state positions. Of course, he was a master campaigner, was likeable, didn’t seem mentally confused, and didn’t win by as much a margin as Biden, which seems weird, right?