The same people who own the establishment politicians own the corporate media.

Its time not arrest not talk!!

ARREST THE BOLSHEVIKS FOR TREASON!

Election was a fraud. Even Joe Biden himself has publicly stated that Democratic party has put together “the most extensive and inclusive voter fraud organization in the history of American politics” (this, by the way, may not have been a slip of a tongue, since globalists like to publicly announce what they’ve done or will do). But to believe that poor, torn apart and strangled by US sanctions Venezuela, or especially Hugo Chavez from his grave, have played any detectable role in rigging of the US elections you need to be a hopelessly indoctrinated lunatic. Same applies to Iran or North Korea. Why didn’t she blame Putin like democrats did? Russia is at least a coherent state with nuclear weapons capability comparable to US, this would have been a claim that is easier to believe!

Sydney Powell mentioned malloch brown in an interview. Do deep digs on him. You will be amazed at what you find. Facebook blocks the link. But if you will use duckduckgo search engine. Then type (Lord Malloch Brown Revealed: The British Hand Behind The Coup Shows Its Scales Again) you will learn tons about Election Fraud!!! 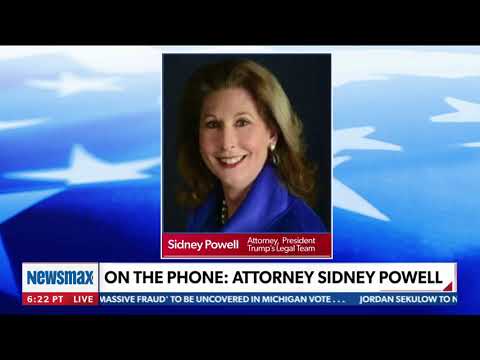 Sidney Powell: It will be BIBLICAL