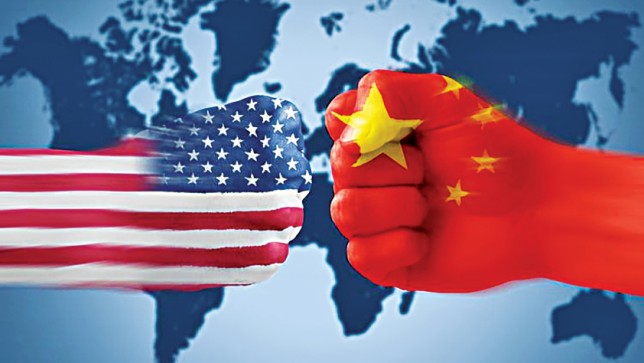 The world is watching America’s chaos in action…..where TRUTH is obscured with dis-information, propaganda, and fake news, combined together as an elaborate propaganda scheme to confuse, dissuade, and destroy any and all credibility wherever it may lay.

The purpose (being perpetrated by Chinese operatives) parading themselves as respectable / democrat / republican RINO politicians and corporate media types, is an illusion of such magnitude, the only end result is Civil War, if not an all out war with China.

‘Divide and Conquer’ can only be accomplished by (1) remove credibility and trust between a population, (2) constant parallel narratives created by China and their CIA counterparts for media dissemination, (3) once respected media / political voices promoting dark propaganda, 4) the creation of an invisible enemy, be it a man-made plandemic bio-weapon, climate change, or a pending catastrophic event, (5) create chaos and fear among a population, which plays into items (1) (3) and (4)….and finally offer solutions to those in fear. After acceptance and acclimation by the population, THE HAMMER FALLS on everyone.

That’s exactly where we are and it is peaking at a phenomenal rate of speed…..

America has been hijacked by a foreign country that has for decades, planted operatives inside the government, local, state and federal, including corporations, social media, banking and food supplies…creatively routing most of the American population into a euphoria sense of well being.

From hard drugs smuggled by Chinese operatives through Mexico and Canada, into and through America’s vulnerable borders, to cheap products, we cannot live without because “Made in America” went-out the window decades ago, to tainted pet food and other foods with crap discovered later and under reported, America succumbed to the Chinese….including the Communist Chinese social media style censorship.

So….how did China steal the election that will likely be declared ‘null and void’ under a pending Martial Law (Executive Order) being advised for President Trump to execute?

The rigged election can be looked at in this simple way…..

There is a 3 bedroom house (WE THE PEOPLE) and an elaborate plan was hatched to steal the targeted TV and computer from the living-room, but by overtly breaking into the front door and leaving finger prints (and being caught), the plan was executed with precision by staging an overt break-in by going through a bedroom window, stealing just a few nominal items, and an overt break-in through the backdoor (kitchen) area, stealing a couple pots and pans, leaving one finger print or two.

Authorities are alerted (by the people) and the argument ensues that no TV or computer was stolen because there they sit ! However….the MINOR thefts from what appears to be the actual break-in(s) will be documented, but no arrests will be made.

News media, of course, was expected to report the major theft from the living-room, since alternative media and credible (eye witnesses) saw the $3,000 TV and computer system loaded into a van, but media says there is no proof of that, therefore….we (the media) will admit there was a theft, but not significant enough to suggest anything BIG happened to the “House” (WE THE PEOPLE), so move along, there’s nothing to the story.

That’s where we are in America with this OVERT foreign interference and hundreds of complicit and treasonous operatives, working on behalf of the Communist Chinese Party (CCP).

But here’s the good part…..

Confidential information, pertaining to the DOMINION servers seized in Frankfurt Germany, by the “White Hats” of the U.S. Military forces, plus uncovered evidence that Chinese Communist front companies, gave Dominion, via UBS banking, $200 million and later $400 million on October 7th, 2020, according to credible sources provided by Alex Jones (InfoWars.Com) is the ‘SMOKING GUN’ and soon to be released by Trump officials, however…..it will be down-played by the fakestream media as nothing to see, move along.

Now….let’s get something straight here for all you deniers.

Unlike the Sorcha Faal and Hal Turner types, considered dis-information agents used to distort the truth and cause in-fighting, I can say (without any doubt) Alex Jones and his team, are literally sitting on a knife’s edge of being shutdown, and/ or assassinated by the Deep State and have NOTHING to lose by providing the world the back-door truth to what is happening in America.

We can expect some major actions by the Trump Administration (SOON) and based-on open source intelligence, the move by Trump to enact “Limited Martial Law” and temporarily suspend the U.S. Constitution for the benefit of Continuity of Government (C.O.G.) and begin arresting traitors, as a new election date is set, monitored and controlled by U.S. military forces, is forthcoming.

The plan so far by the Trump Administration, to allow the election fraud [Coup] to proceed unabated, was and is for the purpose of acclimating the population, by feeding bits and pieces of the puzzle to the public, for some relevance of acceptance and knowledge when the hammer falls. But more importantly….to let the enemy continue while typically destroying themselves in the process.

The military tribunals at GITMO will show the evidence of treason and collusion with the Chinese Communist Party at levels equivalent to an ‘Act of War.’

Rumors that Biden has already decided to, or considering to “Concede if Trump pardons him now,” is not confirmed or considered reliable. Just as my email inbox is flooded with the supposed authentic list of GITMO prisoners, which one particular one listed shows Barack Obama as “executed,” is laughable.

Give me a break….yes it’s confirmed he is Gay and Big Mike still has his genitals, but wears a bra, I accept that based-on all the information, videos, and records seen.

The latest Biden foot scandal, is another one we must continue to watch, since WE DO KNOW high profile types use a boot to hide the GPS ankle bracelet, as we saw with Hillary Clinton and John McCain, but those rumors are still something to keep in-mind, especially the one I really like…

All honorable funerals have perfectly ironed (or new) American flags draped-over their coffins, EXCEPT for John McCain. His coffin was draped with a wrinkled flag, a symbol of being a known traitor.

Like 9/11….there are many oddities to the “Official” narrative, but once (YOU) get into all the evidence, some pieces don’t add-up, i.e., building 7 fell into it’s own foot print in less than 7 seconds, an engineering explosion demolition by design, NOT because of “flying computers and office debris from the adjacent building.”

Or…..cell phone calls in 2001 from altitudes above 3,000 feet. Facts are facts and lies are lies, created by propaganda spin artists to cover-up crimes for a higher power with an agenda.

The stealing of the election from WE THE PEOPLE is just one more conspiracy (with teeth) that will be totally revealed, in detail, and at the same time, the same operatives (if not arrested for treason) will continue to say, “there’s nothing to see, there was no fraud, and if any….very little and not enough to over-turn the election,” thus CIVIL WAR will begin.

The people’s house (WE THE PEOPLE) have the evidence….the living-room was broken into, contents removed (or changed), the entire house of cards is about to collapse. Thanks to you and everyone that knows the truth, but as I stated…..the propagandist and dis-information agents are in full swing and everything we hear about must be scrutinized, considered, or dismissed.

America is in grave danger….keep your eye on China.

“More than 45 million people died as a result of the Great Leap Forward, and The Great Chinese Famine was the largest in human history. Fast forward to 2020, where Joe Biden, a CCP puppet, is threatening the prospect of leading us into war if America doesn’t succumb to the totalitarian demands of the Rockefeller’s orchestrated Chinese Century.”

“China is violating norms and laws left and right,” said FBI Director Christopher A. Wray, adding that the unprecedented case sends a clear message to the Chinese government that “surveilling, stalking, harassing and blackmailing our citizens and lawful permanent residents carry serious risks.”

Assistant Attorney General John C. Demers said Fox Hunt sometimes targeted individuals who might have violated financial laws and were legitimate targets of law enforcement investigations. But many other targets, he said, were political rivals, dissidents or critics of the Chinese government. Pursuing those people with threats and coercion, sometimes directed at the relatives of those targeted, represents “a clear violation of the rule of law and international norms,” he said.