There have been plenty of hot takes from Democrats and #NeverTrumpers on what to do about “extremism” (but not from their lunatics, of course) since the mostly peaceful D.C. protest. Not that they haven’t looked to restrict free speech from political opponents for a long time, but, now they are really ramping it up 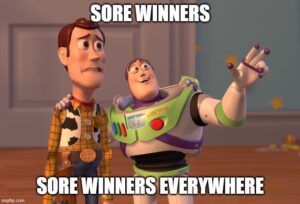 With most Americans hoping this week’s expected inauguration protests look nothing like the Capitol siege, questions emerge about unrestrained free expression, long championed by First Amendment theorists as a benefit to society, no matter how ugly and hateful.

The optics may be disturbing, especially so soon after the riot, with the potential of protesters — many of like mind with those who stormed the Capitol — screaming, or worse, at troops and police standing guard outside the razor wire-topped fences surrounding the Capitol.

Weird, we didn’t hear the same thing from CNN and other media outlets when Biden voters, like BLM and Antifa members, were calling to kill police officers and white people, screaming at police officers as they threw fireworks and firebombs at them and the federal justice building in Portland, right?

Is allowing this type of expression “good” for America? An old First Amendment theory — known as the safety valve — says it is, that permitting groups to express themselves releases pressure, ensuring objectionable ideas aren’t driven underground where they might boil over into violence.

Permitting free speech, including hate and extremist speech, is often cast as a universal boon, reinforced in idioms such as, “Sunlight is the best disinfectant” and “I don’t agree with what you say, but I’ll defend your right to say it.”

Permitting? That’s not the way this works. Government doesn’t permit it, they are restricted from stopping it. I didn’t see Conservatives call to stop the lunatics from speaking at their protests and riots. Mocking them, yes.

Not all First Amendment scholars are buying the safety valve theory, especially after the deadly episode at the Capitol. They question if extremist speech demands more limitations when it’s inextricably linked to the violence at the nation’s legislative headquarters, after hateful online rhetoric dovetailed with politicians and activists delivering speeches to revved-up crowds that marched to the Capitol, some bent on insurrection.

Even the American Civil Liberties Union, the consummate guardian of speech, has sought to address the “competing values” its long-held defense of expression presents, and some experts say free speech theories need to take into account the way social media has transformed the marketplace of ideas.

And this is how we move towards restricting speech. Of course, we do have a Supreme Court which will knock this stuff down, and, if Democrats want a civil war, one which they are vastly outnumbered when it comes to privately owned firearms, this is one way to get it. The “article” gets into plenty of other things, let’s move on to

out:defund the police
in: fund the secret police

this is much better

All find echoes in the events surrounding January 6. None dare say “wake-up call” or “lessons learned”—there’s been far too many of them over the decades. But one response to the 9/11 tragedy may well get renewed attention after the Capitol assault—especially if armed white nationalists are successful in carrying out more attacks in the coming days and weeks: The call for a secret police.

I’m pretty sure this violates the First Amendment, as well. As Twitchy points out, plenty of other Leftists are pushing for this. Are Democratic Party lawmakers dumb enough to give this a shot? Or Joe Biden directing federal law enforcement to focus on Republicans?

Do I need to mention that the 1st protects speech and protesting that we do not agree with?